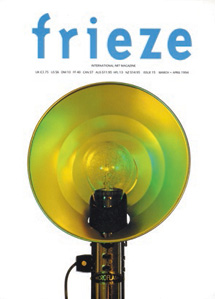 The Holocaust film or the AIDS film? Many in the dinner circles I frequent feared that given a choice between Schindler's List or Philadelphia - most moviegoers would choose Mrs. Doubtfire. Cynical, bitter and jaded, none of us anticipated the success of either. All my friends, of course, saw all three.

Many analogies have been made between the Nazi's genocide against the Jews and the US government's wilful neglect of gay men. Often lost in these analogies is the reality that the Nazis also persecuted gypsies, communists and many others, and that AIDS has hit hardest among the disenfranchised in the US including people of colour, women, drug users and the poor. To what extent are the two films comparable and how useful are these analogies?

Walter Benjamin defined disgust as the fear of being thought to be the same as that which is found disgusting. Both movies, and the situations they depict, hinge around figures of disgust - the Jew, the homosexual, the diseased. Both movies follow the time honoured Hollywood strategy of constructing a protagonist who is not the figure of disgust, but a character 'all' can identify with, who observes the situation from a safe distance. The audience is supposed to develop a rapport with this protagonist as he moves through conflicting feelings of repulsion and empathy until he comes to rest on a higher emotional plane, embracing the figure of disgust as his equal, or at the very least conferring a certain dignity on the then consecrated hero.

Employing a black and white, vérité strategy, much of Schindler's List refers to the reservoir of archival footage documenting the Nazi's final solution. Spielberg relies on the audience's vague familiarity with newsreels and propaganda footage to infuse a 'realness' into his project, an authorative voice. A couple of key moments where a child's coat is coloured red in a black and white field hint at the 'cinematic'; an interesting anomaly within such a naturalistic endeavour, because nowhere else are we provoked to meditate upon the historical distance that separates 'now' from 'then'.

I don't remember the Holocaust, but I do remember the first time I saw a Holocaust film, the condition of many, if not most viewers today. As the event recedes into the past, the traces left behind become more fragile and open to reinterpretation. Each generation struggles with its own sense of commitment; many testimonies are retold while others fade away. In his Maus cartoon books, Art Spiegelman dealt with this idea of commitment while portraying his parents' story of survival. Conversely, Schindler's List falters in its failure to admit the problems of history raised by distance and memory. Therefore its function as a compelling account is easily assailable by those who doubt the Holocaust ever happened.

Perhaps this is why the central figure of Spielberg's film has to be a gentile who saves Jews. That gap between now and then is filled with the conventions of the established enterprise. Hence, the film's only purpose is to tell a convincing story, rather than initiating an interrogation of history. Spielberg presents us with a reconstructed hero, who grants Jews permission to worship and to mourn. As Schindler weeps for the Jews he could have saved, hundreds of Central Casting Jews witness his crisis. Through the tears, his and my own, I felt bitterly resentful that I had come to identify with Schindler, not the Jews. I was led to identify outside of the self I inhabit, revealing it to be the thin construction it is.

I cried watching Philadelphia as well - a film too close to home, depicting an actuality approximating my own. As it is advertised on entertainment news shows and various interview formats, Philadelphia is not about gay men, but homophobia, not about AIDS, but about its stigma. It shares a similar structure to Schindler's List, in that the story is told through the development of a healthy straight character who orbits the figure of disgust, in this case, a person with AIDS. Complicating this further is the rarity of representation of people with AIDS and gay men; the film is burdened with conflicting demands by its audience. Demme's film, however, is distinguished for me, because it introduces a new character to the screen - the AIDS hero.

Tom Hanks plays the very amenable and polite person with AIDS. He's nice, never angry about dying, and always taking care of those around him. He is brave, but brave for whom? Heroism can be an efficient means of denying mortality. AIDS is not about courageous battles resulting in redemption and reconciliation. AIDS is about shit and vomit and wasting. It's about bitter young people dying, rarely surrounded by their biological families (as they are in this movie), but by their alternative families, many gay, many stunned by too many losses. In the end justice is served in Philadelphia, but who feels relief?

A new stage is emerging, where the representations of AIDS conform to well established narratives of heroism. From the extreme of scapegoat that marked an earlier period to a new extreme of heroism, a pendulous swing has occurred and I fear the new image of the AIDS hero as much as I hate the old one of the AIDS victim. The hero is a close cousin of the villain. Both are subjects of a particular specular relationship to the audience of envy, mystery and fascination. The one key aspect of the situation remains unchanged - people with AIDS are viewed as 'other'.

I want to end on this tone, noting the irreconcilable character of all representations concerning both the Holocaust and AIDS. Perhaps the connection between the two is that they both entail enormous losses that can never be recovered. There the analogy ends. Jews in Nazi concentration camps, powerfully depicted in Schindler's List, had little or no agency. Rebellions were violently put down: the oppression was total. Gay men with AIDS in the US have had the resources to fight back, stage protests, and as happens in Philadelphia, to win small gains. It's a shame that in Hollywood film, both stories can only be told from the vantage of some imagined 'normal' subject, vested with the power of judgement, who maintains a safe distance from disgusting situations and the people who live them out.

Gregg Bordowitz is an artist, writer, teacher and director of the Low-Residency MFA, School of the Art Institute of Chicago, USA. His retrospective will be on view at MoMA PS1, New York, USA, from 13 May to 11 October.

Profiles
How Artists Are Re-Imagining Basketball