Seen and not Seen 'Most of the houses are painted white, but many are painted petal pink, frosted mint, buttercup, fudge, rose beige, antique green, Cape Cod brown, lilac, and so on.' Robert Smithson wrote these words after viewing houses in the distance on a rock-hunting excursion he undertook with Donald Judd.

I dreamt that Maureen Gallace borrowed her entire palette from his caring, radical notice of those houses' colours, and so begin, abruptly, with Smithson and Judd in order to yank her strange paintings away from any notion of the quaint. Anyone who cares to may observe her work's Judd-like severity: look at the no-nonsense structure of August (1999). Although Gallace fucks with Judd by showing the box outline of the house to be the most basic form, as with Judd and the first Minimalists any severity is freaked with the solace of colour (his Perspex neons, her slanting winter sun hues - frost, unsalted butter, saltwater taffy green, robin's egg blue). Smithson made work by meditating on human disruption of the land as a sculptural event; Gallace stares at the land, its flora and climate, highways and old stone bridges; a point-blank and actual Connecticut that is simultaneously a Connecticut at the end of the mind (a state of memory). It is as if by diminution she transmutes a Smithson earthwork to reveal the geology in canvas and the sculptural potential of paint. Smithson valued 'indifference' and its effects on a landscape. Un-nostalgic, Gallace's buildings are indifferent to interpretation; her paintings investigate the ecological possibilities of memory. Through her repetition of house after house, it is as if she were tracing the genealogy of some Ur-house. (I've been too lazily referring to the buildings as 'houses' when it's not at all clear that is what they are; but whatever they are - forms, some displacement or deferral of the self- or family portrait - they also signify the psychic comfort and turmoil of 'house' and 'home'.)

That said, it is more than a little difficult to explain why Gallace's paintings are so prepossessing, difficult to convey how challenging and obdurate they are, as well as intensely pleasurable. Why should her intense, small paintings, usually of odd, tight buildings - snug on the beach, often with the fog rolling in, or withstanding snow and ice in rural New England - warrant attention? Their size, despite the precedents of Giorgio Morandi, Albert York and Joseph Cornell, coupled with their repetitive content contributes to the confusion. Small things are easily dismissed; her paintings are not exactly what everyone has in mind when they preconceive an idea of how the contemporary looks. In the constant bombardment of daily life, which I love much of the time, with so many images and sounds and things competing for attention, perhaps people believe they have to shout to be heard or should give their attention to those things which do. Gallace has no truck with such antics.

Her paintings find their philosophical and literary precursors in the private, thorny independents of the American Renaissance: Henry David Thoreau and Emily Dickinson. These genius home-dwellers didn't need to leave the backyard or bedroom to travel vast distances; their quiet yet fierce art entailed a scientific observation of the natural world around them: the psyche's meteorology as part of the weather. Like the craggy, zoological Modernism of Marianne Moore, Gallace's painting is deeply intimate yet deflects personal confession or revelation to an elsewhere that is somehow still contained in the work. Perhaps the single sentence that makes up the paradoxically austere and opulent entirety of the early poem by Wallace Stevens, 'The Snow Man' (1923), could best serve as a manifesto for how to begin to grapple with the consequences of representing the act of staring (at snow, evergreens, icy hills...), or of the landscape evoking and resisting anyone's place in it.

Where is anyone when looking at one of Gallace's paintings? They are not views out windows; their geometries are, purposefully, not conducive to a simple negotiation of what is easily close or far away, what is larger or smaller. Ignoring the figure, they show no absorption in an activity - and yet their effect is often of heartbreaking intimacy. The stubborn Americanness to do what she wishes and nothing else, her subtle painterly imagination and weird originality, hark back to Albert Pinkham Ryder, especially in her earlier paintings' darker colours - midnight green, carmine, black - and romantic, more gestural sfumato. Part of the unsettling intrigue is how, with the utmost care, Gallace's painting attracts through its patient exacting brushwork, and yet its content utterly neglects the human, the way nature does, the way the inanimate does.

All her most recent painting is a meditation on white - as a colour and admixture, as a presence and absence, as light. The winter landscapes, such as Icy Hill (2000), use snow as a reason to explore the way that what covers a surface can still convey what is underneath (boulders, bushes, hills, roads) and paint's ability to make space and surface a continuum. The white of the buildings merges with the white of the snow. A singular thick squib of white paint off-centres the hill of Icy Hill, a decision which emphasizes the materiality of paint, as if joining the steely poetics of Joseph Cornell's exploration of white with Robert Ryman's phenomenological testing of it. The white insists that something like the painted version of the buildings' negative is being presented as strongly as their presence.

Because of her paintings' (seeming and not) investigation of the tradition of landscape painting, their (seeming and not) New England atmosphere, Gallace is often pictured as some sort of naive who somehow managed never to notice later 20th-century art movements - Minimalism, Conceptualism, Land Art, all of which inform her practice. Part of what makes Gallace's work so odd and enthralling is that it comes as close as possible to being what it resolutely is not. This is a truly contemporary problem for art: the amazing, awkward potential of the vernacular in the light of the indifference and availability of the ready-made. Gallace's are landscape paintings, until they're not. She probes the limits of, the 'art' of, the landscapes and beach scenes made by painters in coastal towns such as Provincetown, Massachusetts, and elsewhere, for sale in any gift shop, on boardwalks, at church benefits and yard sales. From pre-school through to television 'How to Paint' programmes, anyone interested in drawing or painting will, at some point, depict a house in which they live or remember living, place it in a landscape to represent an idyll, and paint trees, a body of water, a moonrise or a sunset. This is not a necessarily unsophisticated or simple urge: crusty champion of the abstract Clement Greenberg painted landscapes throughout his life. Look at Gallace's Beach House, Foggy Day (2000). No small part of its power and strangeness is how it invokes and dispels the pictures painted by countless Sunday painters. Gallace reveres the power in the fact of so many wanting to see and make paintings of houses on beaches in sunlight; wants to acknowledge that urge, even reproduce it. And yet one of the clearest ways her work differs from the vernacular is in its belief in beauty while knowing that beauty may never be achievable. In sculpture, Vincent Fecteau tests the limits of art and beauty's possibility via the notions and methods of craft, coming as close as possible to being 'just' craft in a manner breathtakingly similar to that which Gallace pursues with landscape painting. They are troping and wronging the vernacular as a way of paying homage to it, beyond irony.

Painted wet on wet, after many studies on linen paper, another difference from the quotidian vernacular is in Gallace's handling of paint itself. No stroke is misplaced. The difference between the brushstroke going left to right or right to left matters, even if it is complicated to say how. Because she has stared at, observed, studied (by taking snapshots), and spent time remembering the distortion of actual fog, she is able to show the similar distortion techniques of paint and representation, which affect how nature is seen. The house in Beach House, if it is a house at all, is wrong: it isn't grounded. It floats, not quite on the sand, not quite on water. The left wall of the building is not perpendicular but curves out. There are no doors, and either the single window (too long) is meant to be reflecting the sea (despite facing away from it) or the building's interior is sea-filled, as if the open door of Edward Hopper's Rooms by the Sea (1951) had let in too much water. The haunted effects of the real that Hopper depicted through lonely people in rooms, Gallace finds outside with no one; perhaps interiors are too intense, grasping their spookiness beyond even the potential of the surreal. Years of winters snowed in, confined for days; for Gallace interiors remain unseen, unseeable. Sometimes it is impossible to tell the difference between a shriek of laughter (pleasure, sexual satisfaction) or pain (sorrow, abuse).

The outside in Gallace's work suggest differences it is impossible to see or tell of. In Self-Portrait (2000), perhaps the only interior in Gallace's oeuvre, a painting which resembles one of her own floats like a concept or idea on the white wall of a white building. It depicts a house with a black roof atop its windowless structure; Gallace stands in the foreground with black hair atop her head. What can be known from the painting is known only from the relation of the materiality of the paint and colour, the difference or similarity between a painting and a depiction of painting within it. There is no difference between a body painted and a house painted, in that they both become paint, but what does this fact mean, if anything? It is tempting to read the self-portrait as a comment on the inability to know more than the outside, the surface, of anything. Perhaps the outside is all there is to be known, and understanding even that is beyond all ken. It would take a mind of winter to resist this way of thinking. 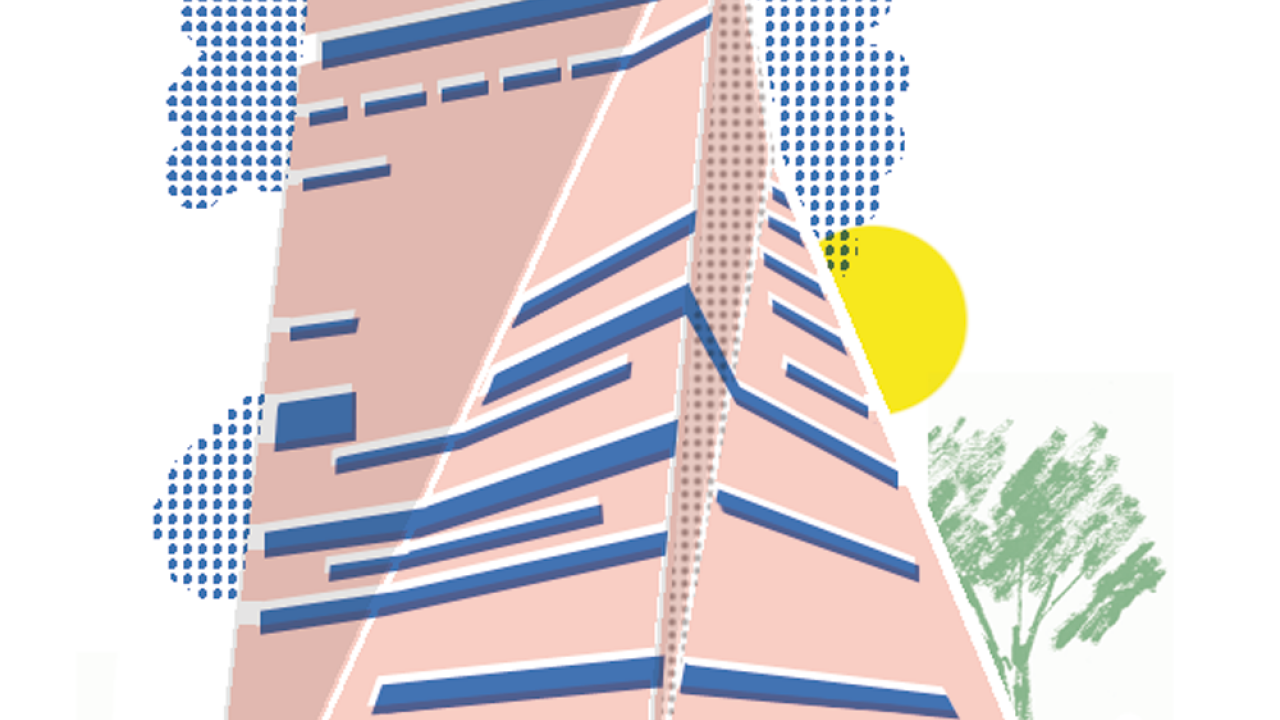 As the fairs move forward this year, there's more to do than ever - both inside and out