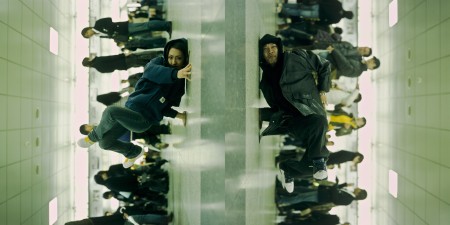 The Sydney-based artist Shaun Gladwell has become known for his videos (usually in slow motion) depicting various subcultural stylings and street stunts such as skateboarding, BMX biking, break-dancing and other anti-gravitational manoeuvres. His signature work, Storm Sequence (2000), a moody video portrait of himself skateboarding in the rain at Bondi Beach, Sydney, has become something of an iconic work of recent Australian art (boosted by its selection by Robert Storr for his curated show ‘Think With the Senses, Feel with the Mind’ at the Venice Biennale last year, and a subsequent Australian auction record). The painterly footage – the skater’s movement slowed to reveal the rhythmic, balletic quality of the act – has even been compared to the tradition of Romantic self-portraiture epitomized by Caspar David Friedrich’s painting Wanderer above the Sea of Fog (1818).

‘In a Station of the Metro’, the largest grouping of Gladwell’s work to date, presented the full impact of his video practice and confirmed the reasons for his international visibility. But the exclusion of Storm Sequence from this exhibition also signalled that it was not intended as a retrospective. Instead, it offered variations on a theme, deploying a range of video formats: single- and multi-channel, small and big screens (even Gameboys were used), monitors and projections. It was an energetic and slick presentation, brilliantly curated by Blair French. In its display some of the work engaged with the specificities of the gallery’s architecture: the title piece used a split-screen video projected on its side in a right-angled corner, depicting performers in a metro station in Japan. Their hands support their bodies, cheeks millimetres from the ground, while their legs are suspended in mid-air – the pose is held, then they get up and walk away. It’s a modest gesture, but the figures are monumentalized into temporary sculptures.

At the simplest level Gladwell’s work depicts urban subcultures creatively reclaiming privatized urban spaces, with a specific interest in bodies in motion (and in pain). Hikaru: Fast Food Sequence (2001) is typical in this regard, showing a BMX rider on one wheel ‘tiptoe’ in and out of a fast-food outlet with barely a blink from customers. By slowing down the video and introducing an abstract electronic soundscape, Gladwell gives simple actions such as this a strange weight. Another work shows a series of people throwing their bodies across the floors of shopping-centre aisles and shiny airport halls. One might almost be forgiven for reading this work as a perversion of Parkour, the French urban territory sport. But nor is it textbook ‘making do’ à la Michel de Certeau. There is something sublimely post-apocalyptic about Gladwell’s videos. While they invite us to think about the strange, generic architecture of such non-places (the metro in the title really could be anywhere) and about their bland functionality. There is beauty here too.

Gladwell’s videos are characterized by their technical simplicity. If the slow-motion effect exploits the plasticity of video, it does so less to push the medium than to test what the curator simply calls ‘real bodies in motion’. Gladwell’s work opens up the space between the still and the moving image and invites a psychologized and aesthetic reading that is at odds with its ethnographic dimension (even if one should note that his cross-cultural performers are engaged in rituals of community and collaboration). Gladwell – once a painter – says he wants his work to operate ‘like moving paintings’, and indeed references to art history are scattered throughout his practice.

A critic recently noted the seeming effortlessness involved in Gladwell’s rise in the art world and suggested that his works are, by extension, allegories of his career as an artist: that it is this ‘artistic self-creation they performatively play out’. It’s a nice line, but most of his works are not self-portraits, and he seems content to disappear when he works with collaborators. And what about a work such as Handrails (2007), with its collated footage of skateboarders attempting (and failing) to negotiate various handrails, with disastrous consequences? The work seems to show the repetitious striving and pain at the heart of such action, and indeed of media culture itself. But to the extent that this work resembles a television bloopers show, parading its subcultural signifiers, it’s much less interesting. The slowed-down videos of original performers are far more hypnotizing and have a cumulative impact when collected together.