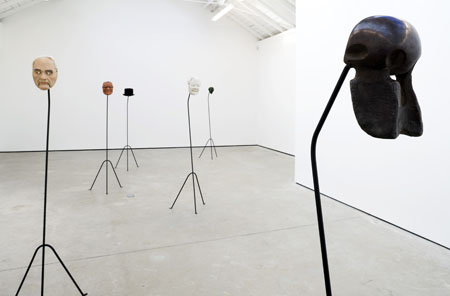 Henry Moore’s four-metre bronze sculpture Nuclear Energy was unveiled at 3:36pm on 2 December 1967, precisely 25 years after scientists at the University of Chicago achieved the first controlled self-sustaining nuclear chain reaction, the event which initiated the atomic age. It was a commemorative gesture, installed on the exact site where physicist Enrico Fermi staged the experiment. Although Moore had originally named the sculpture Atom Piece, he allowed the commissioners to re-title it; the university feared that ‘Piece’ might be misconstrued as ‘Peace’ and thus perceived as a political statement. In 1987, the city of Hiroshima purchased one of the working models for Nuclear Energy, which went on display at the entrance of the Hiroshima City Museum of Contemporary Art, but was moved four years later when the Japanese Hydrogen Bomb Survivors’ Committee objected to the sculpture as a monument to atomic bomb production.
In Simon Starling’s Project for a Masquerade (Hiroshima): Mirror Room (2010), the sculpture’s various histories are collapsed into one polyvalent narrative (the exhibition toured from The Modern Institute to the Hiroshima City MOCA, where it is currently showing). Conflating references to Japanese Noh theatre, the Manhattan Project, Goldfinger (1964) and the Cold War-era art world, the installation comprises eight masks and a single hat (a replica of Goldfinger’s henchman Odd Job’s lethal steel-rimmed bowler) mounted like heads on anthropomorphic iron tripods (a booklet with the back-story also accompanies the exhibition). These objects tell a story based on Eboshi-ori, a 16th-century Noh play in which a young noble boy (named Ushiwaka) disguises himself to escape enforced exile and begin a new life in the east of Japan. Starling, however, assigns each role to one of the players in the Nuclear Energy saga – a motley crew of objects and personages, both real and fictional.
Nuclear Energy itself is given the role of Ushiwaka, the protagonist from Eboshi-ori. Moore is cast as the milliner who disguises the young boy by making him a highly encoded eboshi hat. The art historian and Soviet spy Anthony Blunt is given the role of the hat-maker’s wife, who in the Noh drama reveals a startling secret past. (Blunt was also a staunch supporter of Moore. A second Moore sculpture features among the players: Warrior with Shield (1953–4), which was purchased by the Art Gallery of Ontario on the recommendation of Blunt.) Fast-food icon Colonel Sanders plays the Innkeeper, who welcomes Ushiwaka and warns him of imminent danger. (As the face of the KFC franchise, Sanders serves as a representation of American influence in Japan; KFC also makes an appearance in Goldfinger, in a scene set in Fort Knox, Kentucky.) In the role of the opportunistic bandit Kumasaka is Joseph Hirshhorn, the multimillionaire-cum-voracious art collector, who owned dozens of works by Moore and whose wealth was derived from uranium mining (the ore of which was used to produce nuclear weapons). In Eboshi-ori, the bandit Kumasaka is fought off by a gold merchant, Kichiji. Starling assigns this role to James Bond himself, as portrayed by Sean Connery in Goldfinger, who poses as a gold merchant to ensnare the film’s eponymous villain.
Handcrafted by Yasuo Miichi, a master mask-maker from Osaka, the carved wooden masks make Starling’s spatial and temporal compressions visually manifest. They are amalgams: their assigned identities are uncannily recognizable, yet they also look like traditional Noh masks, with real hair and meticulously applied pigment. Connery (as Bond) is given Asiatic eyes, arched brows and a bow-shaped mouth; Blunt is depicted with delicate feminine features, his eyes closed with only narrow slits for peep holes (characteristic of female Noh masks); Hirshhorn is shown as a fiery demon, with a face like a furious Fu dog (similar to the Kijin-kei, or Fierce God, type of Noh mask). Starling risks losing the viewer with these strange recontextualizations, but the work has striking visual impact, as arcane references coalesce into an elegant, minimal installation. Like an iceberg, the narrative is mostly submerged, with the physical installation only alluding to the depth of Starling’s discursive process as elucidated in the exhibition guide.
For a concurrent exhibition at the Camden Arts Centre, ‘Never the Same River (Possible Futures, Probable Pasts)’, Starling reinstalled works by 30 artists and designers that were exhibited there sometime in the past 50 years in the exact positions they previously occupied. The works were laid out like a chain of digressive thoughts: John Riddy’s photograph London (Willow Road 2) (1998), taken from the interior of Ernö Goldfinger’s nearby house in Hampstead (a Modernist structure which so incensed James Bond author and neighbour Ian Fleming that he borrowed Goldfinger’s name for his most famous villain), was hung near a Goldfinger-designed chair, which was juxtaposed with a late-19th-century Liberty & Co. chair. Erudite and playful, ‘Never the Same River’ presented time and space as fluid and mutable. Asserting the presence of history in exhibition-making, Starling again rendered history art and art history.