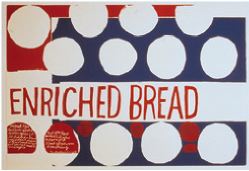 As a first-grader attending St Dominic's all-boys school outside Memphis in the early 70s, I spent a lot of time cutting letters out of brightly coloured felt. In fact, our entire class was a virtual sweatshop devoted to the production of the inspirational banners that would later adorn the church walls. With such Biblical phrases as 'the meek shall inherit the earth' or 'do unto others as you would have others do unto you', these banners conveyed Christian messages in a groovy, Partridge Family way. Personally, I would rather have been outside playing dodge-ball. Little did I know that a Californian nun was to blame for my tortures.

Featured on the cover of the Christmas issue of Newsweek in 1967, Sister Mary Corita Kent had become the figurehead of a movement which was attempting to modernise the Catholic Church. Artist, educator and activist, Sister Corita's trademark banners, posters, prints, signs and painted boxes put bold graphics, bright colours, song lyrics, literary texts and newspaper images in the service of a liberal, spiritual agenda, offering Hallmark sentiments and pop political protest to a culture hungry for change. From positive messages such as Come Alive (You can Make It!) (1967) to the poignant indictment of Manflowers (1969), which captioned an image of two injured young soldiers with the question 'Where have all the flowers gone?', Corita's work struck out against both cynicism and injustice. It was also hugely popular. Widely disseminated, reproduced and copied, her signature style found inroads everywhere in American culture. From classrooms to kitchens, gift-shops to art galleries, the country had become, by the 70s, Corita-ised. One of the reasons for this success was the sly manner in which Sister Corita appropriated graphic tropes from the culture itself, bending the iron backbone of capitalism - advertising - to her own devout ends. Born again household staples like Wonder Bread, Corn Flakes, and Sunkist oranges were suddenly speaking the Good Word.

The exhibition at UCLA, curated by Michael Duncan, brought together 50 vintage Corita prints and works by a diverse array of Southern Californian artists. Neatly laid out, the show successfully contextualised Corita's practice within the realm of contemporary (specifically Pop) art and drew parallels between her work and that being made in Southern California by artists such as Ed Ruscha, Philip Hefferton and Robert Dowd. One of the highlights of the show was a selection of photographs taken by Corita as source imagery for her work. Studies of storefront signage and crumpled magazine covers recall similar studies made by Warhol, or the urban photography of William Klein. Seeing Corita's work along side artists such as Raymond Pettibon and Steve Hurd underscored the more populist aspects of the latter two. Yet, in other cases, the juxtaposition lent an unintentional Catholic patina to basically secular works. Asking the question 'How do I find meaning?' Lari Pittman's Untitled #54 (1991) suddenly seemed to be looking heavenward for an answer. Similarly, Mike Kelley's felt banner, The Escaped Bird (1987), which reproduces a peace dove silhouette in a mordant reference to the failure of the very 60s-era liberalism that Sister Corita championed, was, in the context of the show, stripped of its critique.

Across town, artist and curator Julie Ault's pairing of Sister Corita with New York-based artist/activist Donald Moffett highlighted the social protest at the core of their respective practices. Moffett, a former member of the artist-collective Gran Fury, also produced bold, graphic works which lifted text and images from popular media. Yet, unlike Corita whose messages were delivered with a soft touch, Moffett preferred a stark, in-your-face fusing of text and image that took its cues from 80s advertising and didn't shy away from naming names. Trading in sardonic double-entendres, works such as Still Our Man (1991) featured a smiling Jesse Helms, while the text in Knock Knock (1991) was plastered over the White House. Reproduced in the Village Voice as part of their 'Age of AIDS' column, these and other works successfully brought their message to the people without the shrill polemics that made other issue-oriented art of the time so off-putting. What makes Moffett's work from the late 80s and early 90s both important and shocking is the realisation that the social ills he was then fighting against - AIDS, prejudice towards gays in the military, problems with arts funding - still plague us today. Perhaps this is also why Sister Corita's work, with its indelible Humanism, is once again finding a receptive audience.