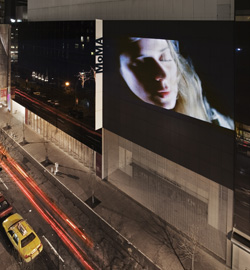 Early last winter advertisements for Doug Aitken’s public art spectacle Sleepwalkers started appearing in subway stations and bus shelters around New York. Featuring an elegantly rumpled Donald Sutherland, the posters suggested some sort of high-toned entertainment, although you had to read the fine print to learn the details – that it would be a video piece screened on the multiple façades of the Museum of Modern Art. ‘This body is the city/this city is my body’ ran the tag line, which, as tag lines go, was pretty effective. (Although, since when does a new art work have a tag line? Or, for that matter, a citywide advertising campaign?) The catch phrase was vague enough, in a ‘poetic’ sort of way, to be intriguing as a teaser yet managed to broadcast the conceptual terms the work would engage. It addressed us, in its oblique first-person diction, as fellow New Yorkers. When Sleepwalkers débuted, it could be assumed, we would be encouraged to think about the permeable boundary between public and private, the interpenetration of our little subjectivities and the greater urban world in which they operate.

As it happened, Sleepwalkers opened on the first brutally cold night of a previously balmy, global-warming-era winter – the kind of night when all sane residents try to keep their bodies as distinct from the city as humanly possible. The crowds who showed up to watch huddled in MoMA’s sculpture garden and paced around in a nearby lot, while Aitken’s silent, not-quite-narrative work was projected across the exterior surfaces of the museum. There was Sutherland, larger than life, portraying a blank-faced business executive. And there, each occupying their own chunk of high-end midtown real estate, were Tilda Swinton as an office worker, Chan Marshall (aka Cat Power) as a sombre postal clerk, Brazilian singer/actor Seu Jorge as an inscrutable electrician and Ryan Donowho – an incongruously non-famous actor and musician – as a bicycle messenger. In a series of remarkably synchronized shots they begin their all-night shifts (this is ‘the city that never sleeps’, after all): in unison, hands twitch into consciousness, showers are taken, beverages consumed, clothing donned. (The message, if there is one, seems to be, ‘Everybody puts their trousers on one leg at a time.’)

These five pretty people make their alienated ways through the city to their workplaces, and each ends up in a fanciful moment of private release: Sutherland tap-dances on top of a taxi, Marshall wheels dervish-like, Swinton plays a violin, Donowho bucket-drums and Jorge spins a lariat. At various points in the drama the imagery dissolves into abstraction: traffic lights swell, street signs swirl in a Mondrian boogie-woogie. The effect was dazzling: Aitken’s syncopated rhythms seemed to match the natural soundtrack of evening traffic, and presented a flattering – if slightly familiar – dream version of the city.

A more mundane version of the urban experience was in evidence at the opening night reception, as the throngs packed into the museum, struggled to get drinks and crowded around a small stage where Jorge played a few samba tunes. This wasn’t Aitken’s urbane urbanism: there was no glamour of isolation here, just the press of crowds and the sheer difficulty of getting what you want. Seeking some escape, I wandered into a mostly empty gallery, where an excerpt from Warhol’s Empire (1964) was projected on a wall. The flickery black and white Empire State Building remained unchanging, unembellished and still. Those were the days when buildings knew their place. Now, though, seeing scenes played out on architecture is not especially novel. A few blocks away, in Times Square, public and private intermingle in video advertisements on every other building. And, as all New Yorkers know, Times Square is only the face the city shows to outsiders. Sleepwalkers continued to play every night for a month, and I returned several times, making my own solitary journey through the night city. The frosty weather of the first night continued throughout the run, as did the elegant chill the piece itself gave off.