Smiling Through My Teeth 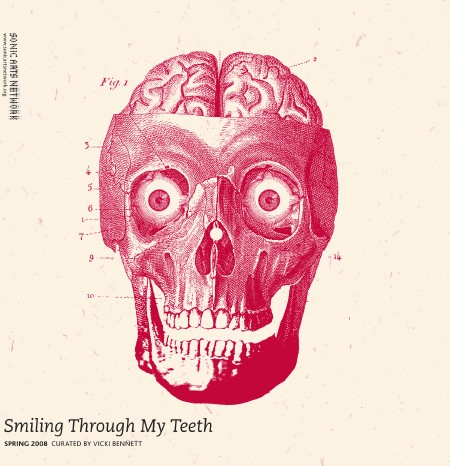 The uneasy interface of pleasure and pain has informed sound artist Vicki Bennett’s selections of humorous experimental music on Smiling Through My Teeth, a feast of nerve-jangling ranting, parping and squeaking. The relentless energy of the 32 compositions featured is their most appealing comic feature, demonstrating the various unexpected ways in which sound-making and audio collage can tickle us.

Kicking off in historical mode, we are treated to Spike Jones and his City Slickers’ insane take on Gioachino Rossini’s William Tell overture. This classical music ‘interpretation’ from 1947 is one of many that was eventually included on Jones’ Murdering the Classics (1971), a collection similarly full of novel sound effects and taped voices reminiscent of the music that accompanied the casual violence of the great cartoons of the 1930s and ’40s. (The second track, ‘Girl at the Typewriter’, is by Raymond Scott, whose music was adapted by Carl Stalling for numerous Warner Bros cartoons.) The task of leaping around a studio honking, whistling or tramping a tray of gravel recalls the splendid title of the 1920s’ classic ‘My Brother Makes the Noises for the Talkies’, and this is an album all about improbable noises.

In Leif Elggren and Thomas Liljenberg’s ‘9.11 (Desperation is the Mother of Laughter)’, the performers laugh in every conceivable way, from coquettish giggle to demented cackle. Following in hot pursuit is ‘The Most Unwanted Song’, which combines quasi-soprano singing with bagpipes and banjo. On ‘Maria Callas’ Christian Marclay slices and splices the opera singer’s voice to transform her cut-glass soprano into something oddly modern, reminiscent of György Ligeti’s opera Le Grand Macabre (1975–7). Further aural perversions are manifest in the collection’s covers of various chart-toppers. The mangling of Black Box’s ‘Ride on Time’ by Xper.Xr. with Chinese instruments is deeply alarming, a perfect definition of a guilty pleasure since the listener is not sure whether to laugh at or with their arrangements. Other hideous hits peek out through the sonic soup in Stock, Hausen & Walkman’s ‘Total Pointless Guidance’ mix of a Vomit Lunchs track. Submerged under layers of lurching and clanking are Sir Paul McCartney and his heinous yuletide hit ‘A Wonderful Christmas Time’. Hot on its heels is a Rank Sinatra rendition of Ah Ha’s ‘Take on Me’ of astonishing brutality.

Completing Bennett’s thoughtful lap of sound art fun, the disc returns to the world of classical music with Richard Lair and Dave Soldier’s ‘Thai Elephant Orchestra Perform Beethoven’s Pastoral Symphony First Movement’. The piece gets comically lost in the elephants’ performance as it creaks and wheezes its way along in ever-shifting time signatures. Bennett successfully highlights the proximity of techniques in the ‘novelty’ works to those deployed by more notionally ‘serious’ artists such as Nurse with Wound, making us take silly music more seriously and the serious work more lightly. It demonstrates the humour inherent in sounds themselves rather than songs with humorous lyrics, and, as such, presents a convincing and darkly amusing sonic essay on the subject.