Spaces of Experience: Art Gallery Interiors from 1800 to 2000 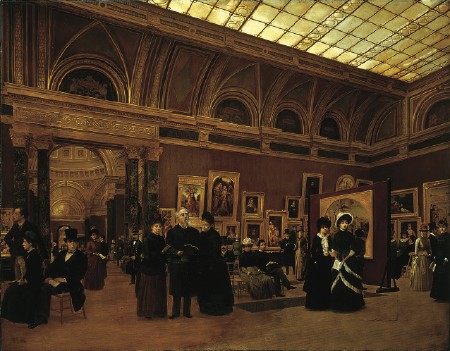 Thirty years ago, artist and writer Brian O’Doherty revealed some of the political and economic implications of the ‘white cube’. It is, we now acknowledge, anything but a neutral container. While O’Doherty’s polemic holds up well, it doesn’t address at length how such design features as coloured walls, wainscotting and decorative furnishings were slowly excised from the typical gallery environment. Art historian Charlotte Klonk’s limited but engaging study Spaces of Experience traces just this history. Ranging idiosyncratically across the last two centuries, she examines the influence of colour theorists, psychologists, businessmen and artists on the design decisions undertaken by museum directors in Europe and the USA. Klonk shows how changing theories of perception and individuality, as well as evolving attitudes toward gallery visitors, were at the centre of some surprisingly intense debates about how to present art. 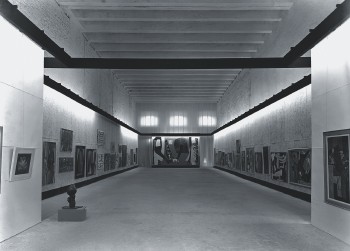 The gallery designs of the 19th century were shaped primarily by scientific theories: Goethe’s discussion of colour had museum directors calibrating their walls to match the dominant hues in their painting collections; later, in the 1890s, Wilhelm Wundt’s stimulation experiments prompted a scramble to eliminate ‘sameness’ in gallery architecture. Such scientific considerations were intertwined with social and political questions. Were spectators to be treated as a liberal body politic that could learn, in galleries, the art of citizenship? Or were they individuals seeking intimate, emotionally charged encounters with masterpieces? At the beginning of the 20th century, the latter view came to dominate, leading to rapid changes in display strategies: art works were given more breathing room; period details and furniture were removed; patterned papers and colour were banished from the walls. This story, as Klonk tells it, is almost exclusively German, populated by figures such as the gallery directors Wilhelm von Bode, who was inspired by collectors’ homes, and Ludwig Justi, who hung canvases extremely low down and (radically!) in a single row. 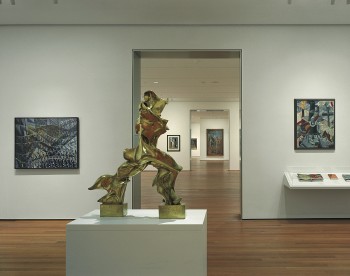 But with the ascent of a Weimar ‘culture of pure exteriority’, in which functionalist shop window displays contributed to the spectacle of the street, the main tenets of gallery display changed once again. Klonk’s book excels in tracing this evacuation of distinctiveness, though it also takes on a polemical tone. It is clear that she admires Bauhaus-era designs for ‘collective experience’, such as those by Herbert Bayer, Friedrich Kiesler, El Lissitzky and others. It is equally obvious that she laments how quickly they were neutered and co-opted, especially by Alfred H. Barr, Jr. and his corporate-minded board members at the Museum of Modern Art in New York. Somewhat perfunctory discussions of documenta, artists’ installations and recent ‘starchitect’-designed museums bring Klonk’s history up to the present. But she believes, rightly I think, that such developments ‘represented no deviation from entrenched modes of viewing, no challenge to individual contemplation, and certainly no departure from the idea of the spectator as consumer’ made popular in mid-20th-century New York. Despite this, Klonk is not despondent; it is precisely by unearthing earlier models that emphasized the gallery as ‘a space of public interaction and communication’ that we may finally be able to reconstitute it as a space in which to explore ‘issues relating to human social interaction’. Spaces of Experience is a useful first step in this recovery effort.

is curator of photography at the Cincinnati Art Museum, USA.