'Spiteful of Dream' by Jane and Louise Wilson 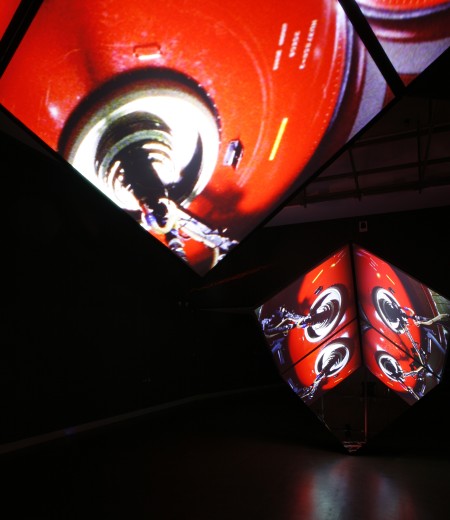 How does this project relate to your earlier work?

In as much as part of it is a multi-screen video, it relates to our earlier work, which used a similar format, but it’s different in that the installation will include a kinetic element. Also it’s the first time we’ve worked with voices, which introduce an emotional element to the installation by bringing in first-hand narratives of asylum seekers and refugees in Derby.

How long did the work take to complete?

It was commissioned about a year ago. After a nine-month period of research and documentation, we were ready to film in July.

How was the work made?

The work developed by researching immigration in the Midlands. Derby is one of the main processing centres and also the location of two of the biggest transport companies and main employers in the region: Rolls-Royce and Bombardier (a Canadian company that builds trains and planes). It is also where Smith’s Clocks are based (the company we worked with to create a kinetic element). We decided to animate the oral histories of the refugees and asylum seekers we met at the Bosnia-Herzegovina Community Association with filmed footage from Rolls-Royce, Bombardier and the Community Centre, which is in the middle of Derby. It was initially set up for refugees from the conflict in Bosnia, but has since become the main drop-in centre for asylum seekers and refugees. We began by making storyboards from the still photography we took during our research, and then shot the film on Super 16 mm, which was then tele-/cined onto high definition. When it came to the interviews, we liaised with the Bosnia-Herzegovina Community Association. We weren’t sure who would turn up to be interviewed, but when a group of people did, we only recorded one take of their accounts of how they arrived in England – it was important to keep that immediacy. It wouldn’t have been realistic in this situation to chase people for follow-up interviews, as some of the people we talked to didn’t have a fixed address because their status was still undecided. Derby has long been a centre for migration, manufacture and transport, and there seemed to be a relationship here between the mechanics of movement and the upheavals of people arriving in the city. The questions we asked were directed around how they arrived in the UK, particularly their journey here. As most of the stories were traumatic, we were careful not to ask people to revisit these memories too often.

Did the work change during the making of it?

Yes! Originally the installation was going to include five movable elements, but we quickly realized the logistics of this approach would have been really cumbersome. So we took the idea of the clock mechanism and condensed it to one movable element, which was a much better solution. Having several large-scale movable elements would have inhibited people from moving around the installation, and we still wanted to keep that possibility of being able to stand inside the work, outside the work, beneath it, behind it, in front of it.

Who was involved with the making of the work?

We made it, with the assistance of a film crew, a producer, an AV technical company, fabricators in Germany and Austria, and the interviewees.

At what stage during its manifestation was the work given a title?

The work is titled Spiteful of Dream, which refers to a painting containing this quote, that we saw in the Bosnia-Herzegovina Centre. It’s a direct translation into English of an old Bosnian saying, and it speaks of a paradox.

Is the finished work what you expected it to be before it was made?

As we often can’t assemble the finished work in our studio, there is a mixture of expectation and relief when we finally see it installed. It’s like that transition from a 3-D drawing to a 3-D object: it becomes physical and at the same time architectural. Also, the sound is transformed; it becomes much more spatial.

Who, if anyone, commissioned the work, and how does the context in which it will be exhibited influence its creation? S

piteful of Dream was commissioned by the QUAD gallery, which is a new space in Derby, designed by Feilden Clegg Bradley. It includes two cinemas, a large exhibition space, a studio for a residency and the BFI archive for the Midlands. As QUAD gallery is a new media space, we were fortunate to be commissioned, as artists working in video, to make a new installation. During the course of a year we were travelling frequently to Derby, and in that sense the commission felt much more like a residency, which also influenced our work.