Spooky Actions at a Distance

A report from the culmination of the 2016 Bergen Assembly

‘Friendship is a series of “spooky actions at a distance” – the smaller the distance, the spookier the actions become,’ said Fred Moten on a panel staged during the opening weekend of Bergen Assembly’s September events programme. The poet was speaking about working with friends while sitting alongside collaborators Stefano Harney, Wu Tsang, and Hyptia Vouloumis, during freethought’s ‘Infrastructure Summit’, part of a larger framework of activities taking place over the weekend. Moten’s reference to ‘spooky action at a distance’ inverts the Albert Einstein-coined phrase used to challenge a quirky upshot of quantum mechanics, whereby particles positioned a distance apart could, in theory, affect each other – something impossible under Einstein’s own special theory of relativity whereby objects can only be affected by their immediate surroundings. While I’m sure Einstein never intended ‘spooky action at a distance’ to be used in terms of creative collaboration, in the context of the Bergen Assembly, Moten’s interpretation of the phrase seemed apt.

In a sense, forming connections between aesthetic conditions (whether they be sound-, object- or research-based) is the curatorial approach of the Bergen Assembly: a long-form project developed under the curatorship of two collectives and an artist who work collaboratively. The advisory board (including Ute Meta Bauer, Ina Blom, Ingar Dragset, Bruce Ferguson, Maria Hlavajova, Ranjit Hoskote and Solveig Øvstebø) left the thematic narrative up to each of the artistic directors: Lebanon-born, Paris-based Tarek Atoui, public research collective freethought, and Berlin-based curator-duo PRAXES, comprising Rhea Dall and Kristine Siegel. All were invited to realize curatorial programmes that have unfolded both separately and together over the past two years (at least). While not necessarily sharing ideological aims, each of the three collectives demonstrated a concern with how time is organized and developed under current conditions, specifically those found in the cultural sphere where institutions rely on freelance, outsourced work, and project timelines never allow for pause. Taken together, the curatorial scope and the works on view express a self-reflexive anxiety about the slippage of time and a desire to slow things down.

The most complex programme was organized by freethought (a collective of academics, theorists, and curators including Stefano Harney, Adrian Heathfield, Massimiliano (Mao) Mollona, Louis Moreno, Irit Rogoff, Nora Sternfeld), who explored the term ‘infrastructure’ across six exhibitions – ‘Shipping and the Shipped’, ‘End of Oil’, ‘Spirit Labour’, ‘Infrastructure of Feeling’, ‘Archives of Substance’ and ‘The Museum of Burning Questions’ – and three talks programmes: ‘The Infrastructure Summit’, ‘The Partisan Café’ and ‘The City Seminar on Infrastructure’. Each segment considered how institutional frameworks permeate our collective and individual bodies as well as infrastructure’s more immaterial and affective results. Most successful in unpacking the term was ‘The Shipping and the Shipped’, curated by Stefano Harney. The most gripping work included was an essay documentary titled Serpent Rain (2016), a commissioned work by Arjuna Neuman and Denise Ferreira Da Silva that argues for an alternative history of logistics through its synonymous relationship to the Transatlantic slave trade. The film features long shots of melting glaciers and frozen forests within an hours drive from Bergen, juxtaposed against appropriated images of J.M.W. Turner’s The Slave Ship (1840) and footage of recent riots in London, Ferguson, and Baltimore following the killings of three black men by police in the UK and US respectively: Mark Duggan in 2011, Michael Brown in 2014 and Freddie Gray in 2015. Everything in the film seems timeless: ‘It is impossible to tell where one ends and the other begins / would all distinctions unravel without time?’

While Neuman and Da Silva’s film handled black subjectivity with subtlety, Marvin Gaye Chetwynd’s The Cell Group (Episode Two) (2016)– part of PRAXES’s selection – doesn’t. Popular culture is a common theme in Chetwynd’s work, but at times it is comes with a clumsy, surface-level irony of black cultural appropriation. Firstly, with the artist taking the name of American soul singer Marvin Gaye – Chetwynd cites a ‘fascination’ with the death of the singer – secondly, with her use of hip-hop as a carnivalesque backdrop for her performances. Take, for example, the 2002 performance and video Thriller – Hoxton Hall (2002), for which Chetwynd hired an amateur actor to recreate Michael Jackson’s famous music video, or her new work The Cell Group (Episode Two) (2016), which features a parade of performers in ‘Bitch Don’t Kill My Vibe’ shirts swinging around dummies to a tweeny pop rendition of Andre 3000's ‘Hey Ya’. Chetwynd’s pop culture-referencing performances are intentionally overindulgent and silly, however, the artist's adoration could easily be confused with blatant appropriation and doesn’t do anything to critique her own position.

At the core of PRAXES's curatorial interest is an in-depth study of an artist’s work over an extended period of time. In addition to their inclusion of Chetwynd’s performances and props, they have curated a year-long survey of feminist art pioneer Lynda Benglis, and for the opening weekend of Bergen Assembly September programme, two exhibitions studying her sculptures and film works opened. At Bergen Kunsthall was ‘Adhesive Products’ which, anchored around Benglis’s seminal pour piece Untitled VW (1970), honed in on her material influence on artists currently working with sculpture: Nairy Baghramian, Olga Balema, Daiga Grantina, Sterling Ruby, and Kaari Upson. In addition to this, Entrée gallery staged a small exhibition of Benglis’s three films: Now (1973), Collage (1973), and Female Sensibility (1974). A thread connecting all three works is their exploration of female sexuality and the shifts of power between the female figures on screen and a third, often-male, protagonist. In Now, the silhouettes of two women appear on either side of the frame, with Benglis coyly asking an invisible director: ‘Do you wish to direct me?’

Departing from discursive and object-based works, sound artist Tarek Atoui’s project WITHIN (2016) asked how it might be possible to touch and feel sound as well as hear it. Over the last two or more years, beginning not just in Bergen but at previous residencies as well, Atoui has worked with a collective of musicians, sound engineers and instrument makers to design instruments for the hearing impaired. Atoui’s project interacted with local institutions around Bergen, inviting students from a school for the deaf to take part in conducted public rehearsals. The instruments are often assembled from materials such as marbles, wood and metal, producing vibrations by the movement of materials across textured surfaces. In the case of Atoui’s collaboration with Greg Niemeyer, Perrin Meyer and Jeff Lubow on The 0.9 (2016), an instrument similar to a theremin requires the performer to gesture into a grouping of nine Meyer subwoofer speakers. Their gestures are then captured by software that reads and translates the movements into subsonic sounds that the audience can literally feel. The success of these performances relies not only on the instruments, but on the architecture as well, with the instruments’ vibrations producing an effect on the empty public swimming pool itself.

The first Bergen Assembly, held in 2013 and curated by Ekaterina Degot and David Riff, came into being after the organizers convened in 2009 and asked the city: to biennial or not to biennial? Emerging from a platform indecisive about what it actually is has resulted in a more experimental take on the biennial format – in fact, they decided to triennial. Now in its second edition, Bergen Assembly is, more than the objects situated within the city-spanning exhibitions and projects, a spectacle of curatorial research, one made (sometimes ham-fistedly) manifest by these working groups. Yet, the curatorial narrative brought forward by the artistic directors is necessary when presenting some of the works on view. This was especially the case with part of freethought’s project, where two years of research on ‘infrastructure’ could only understood via the mediation of members of the collective. Taken together, the collaborative projects involved in this year’s Bergen Assembly reconsidered the boundaries of a biennial format, creating a forum for ‘spooky actions’, embedded in education and research, for future biennials to consider.

Julie Niemi is a curator, writer and editor based in Milwaukee, Wisconsin, USA. She is an Assistant Curator at the John Michael Kohler Arts Center (JMKAC) in Sheboygan, Wisconsin. She received her MA at the Center for Curatorial Studies, Bard College, Annendale-on-Hudson, New York. 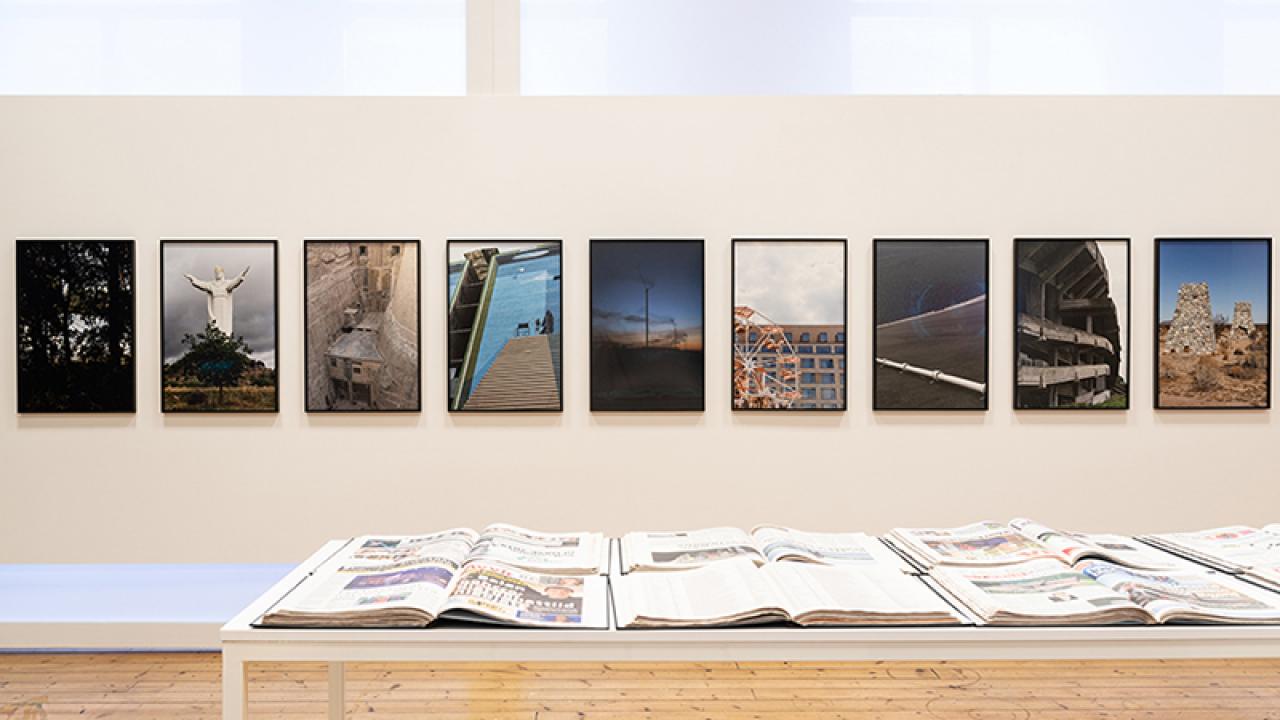 Reviews
Bergen Assembly: When the Polyphony of Voices Hinders Us From Listening 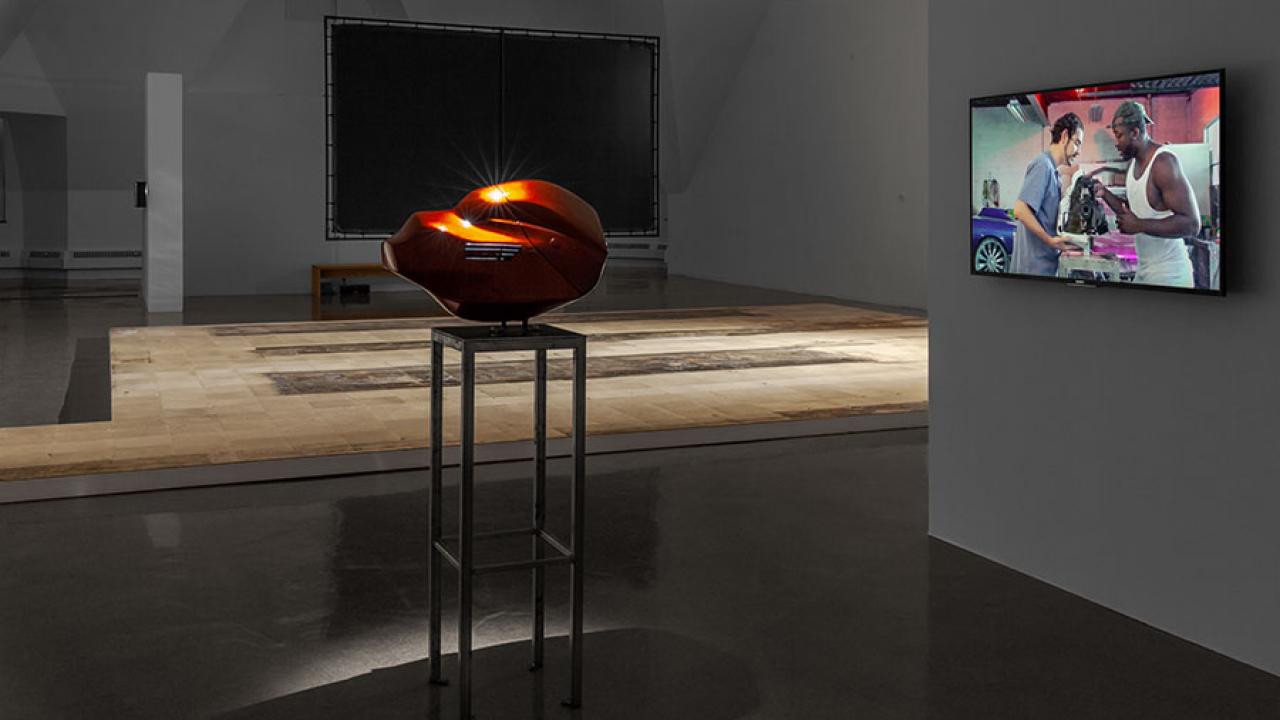 An exhibition at The Renaissance Society, Chicago, shows the artist's investigation into the ways labour and debt operate in Miami's Liberty City 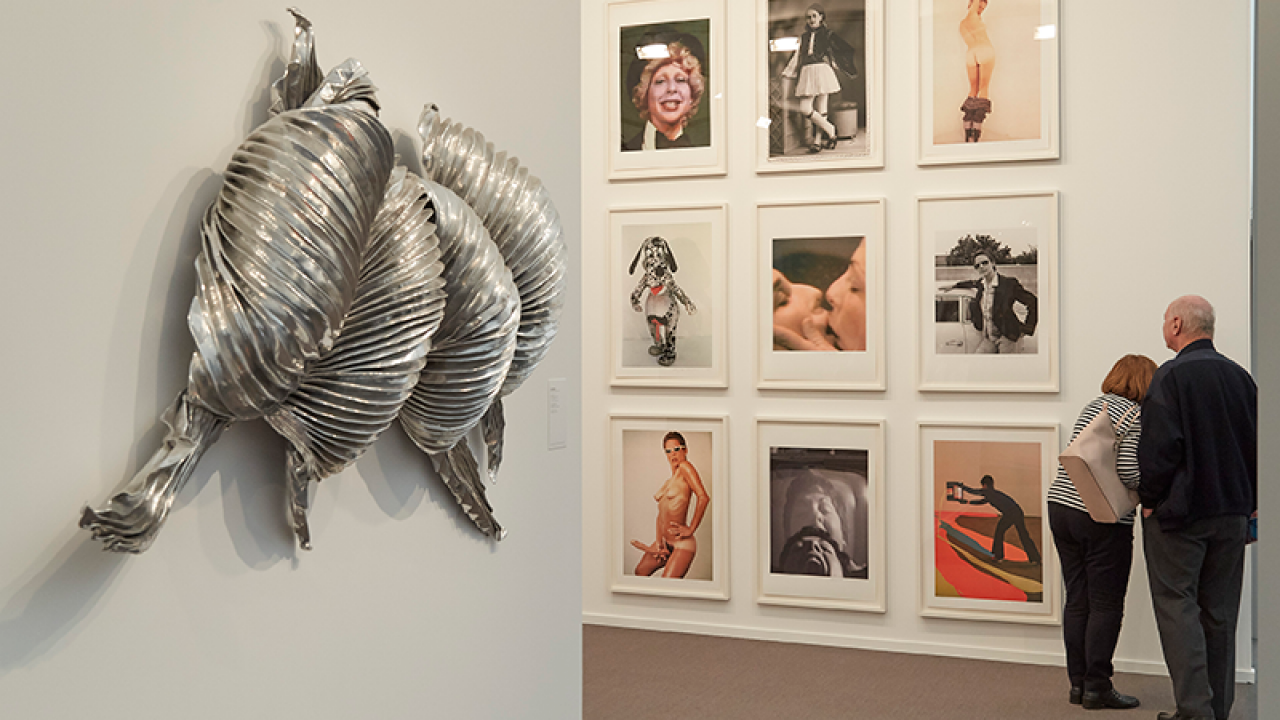 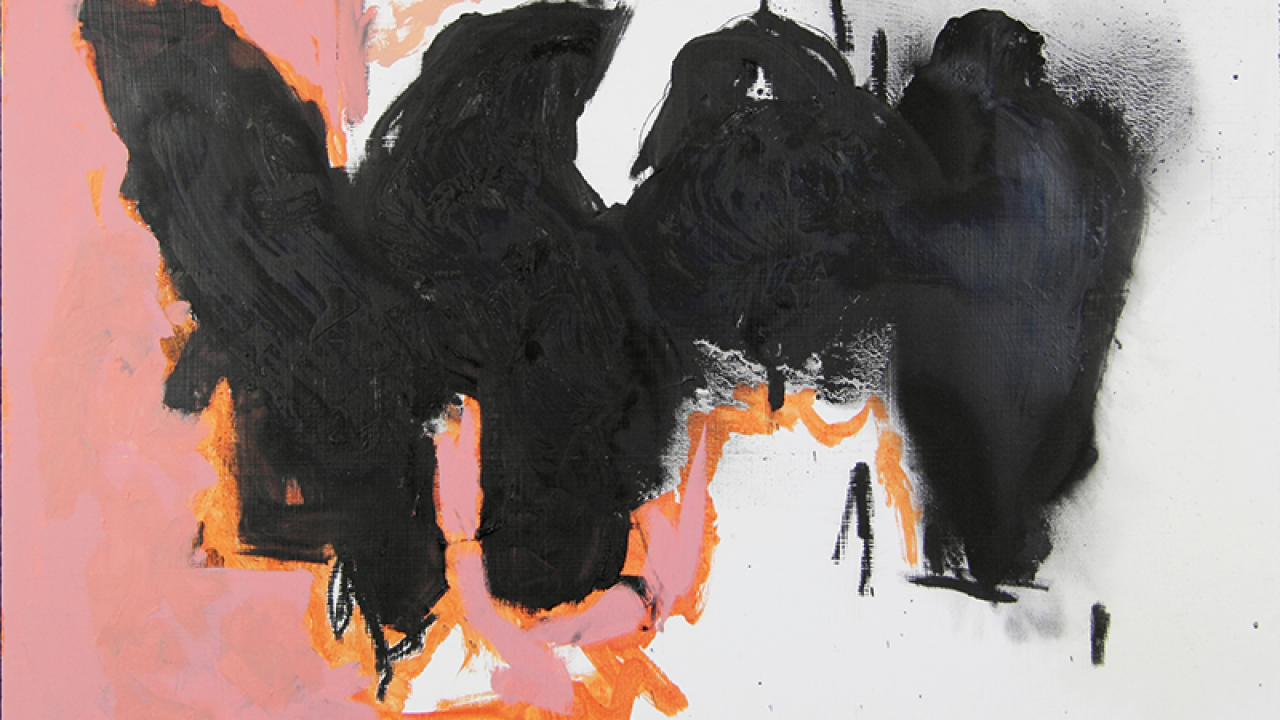 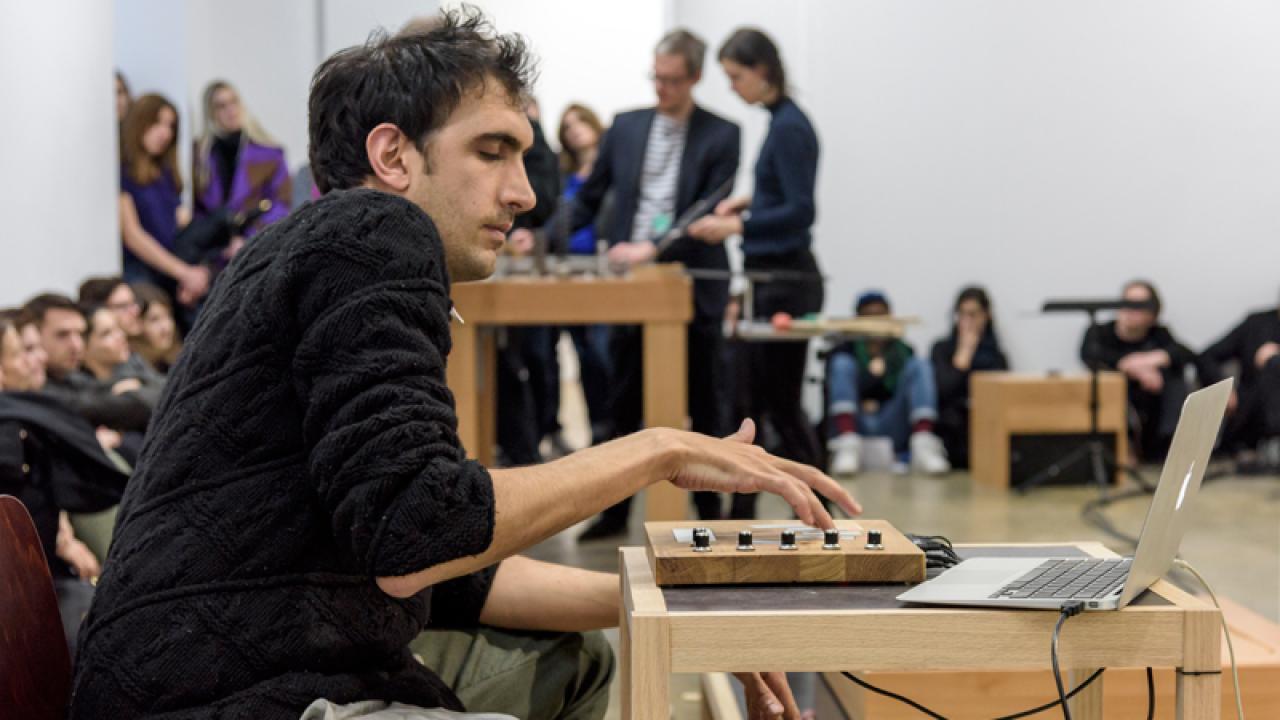 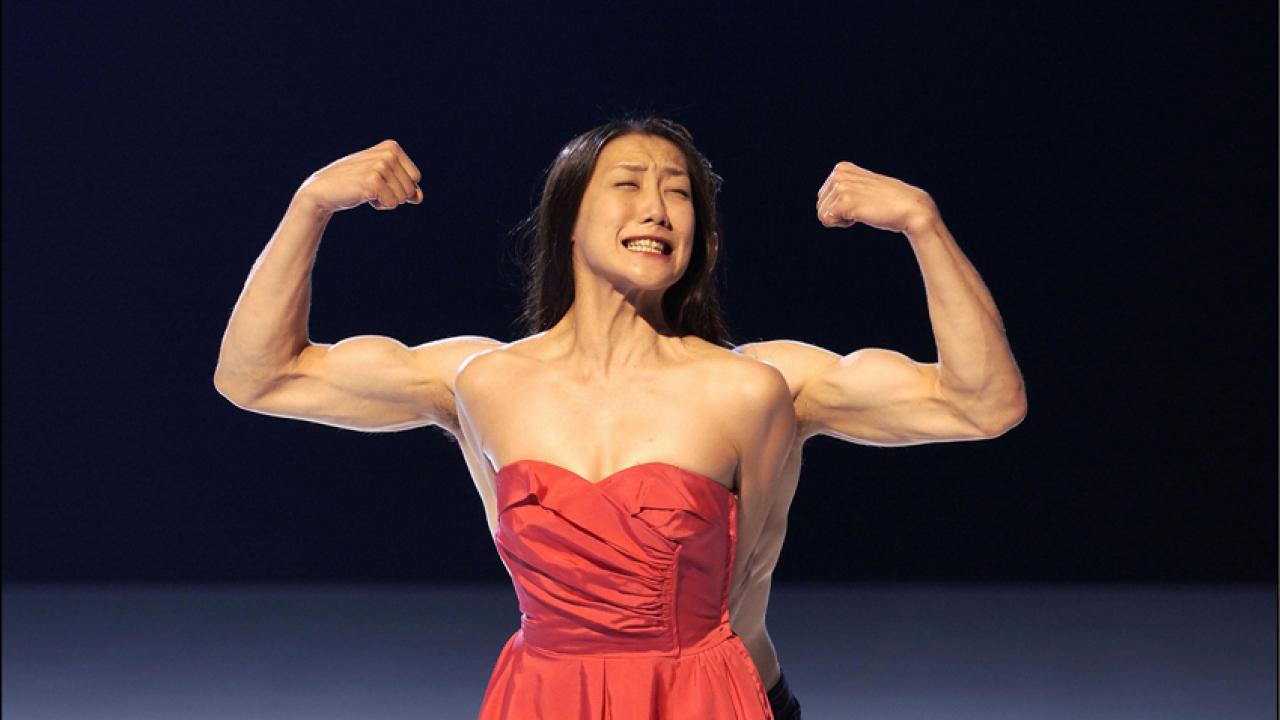 From Duchamp to Roald Dahl's The Witches, the London-based artist selects the images that have stuck with her