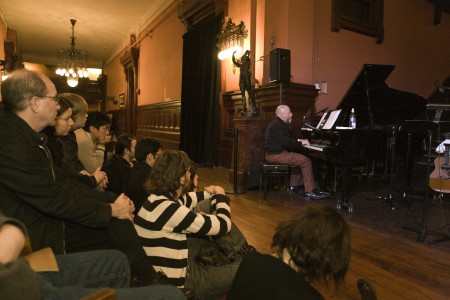 There was pan-American and cross-generational applause for Stephen Prina when he arrived to give a performance as part of the raft of Whitney Biennial side-shows that unfolded throughout March at the Park Avenue Armory. His students from Harvard travelled down to see their Conceptualist mentor; former students from California showed up too, and I found myself seated on a bench with Prina’s former teacher Barbara Kruger. That there was both youth and age was just as well, as Prina had in mind a kind of music quiz. Not that he declared it as such – he simply took up his acoustic guitar and launched into a polished rendition of Carole King’s sorrowful ballad ‘It’s Too Late’ (1971). Then there was some Joan Baez, some Joni Mitchell. He laid down the guitar and took a seat at a baby grand and performed a Glen Campbell number, and somewhere along the way he did some David Bowie, a tune by Antony and the Johnsons and a few songs of his own invention. Prina introduced the title of the performance but said little or nothing between songs, did a brief encore, and then it was over. It was genteel, professional, oddly conventional: Prina used to wear a red jumpsuit at his music performances, but at the Armory he opted for a pair of plaid trousers and a black jacket that wouldn’t cause a fuss during dinner and polite conversation afterwards.

Prina told me later that, when he was young, he wanted to be a rock star more than an artist, and when he attended college, he studied painting and music composition, immersing himself in the work of John Cage. Since then, he has turned his art towards institutional critique while his music has issued in various forms, from a performance entitled Sonic Dan (1994–2001) in which he yoked Sonic Youth, Steely Dan and Anton Webern, to work with The Red Krayola and his own solo album Push Comes to Love, which he released in 1999.

He’s done avant-gardism and he’s done noise, but, he said, to put either of those across to a Whitney audience would be entirely conventional. To be normal would be abnormal. To deliver easy-listening singer–songwriter material might just – like Monty Python’s comfy chairs – produce the greatest discomfort of all. The crowd could, of course, find some brainy relief in pondering how the performance rated alongside Prina’s eponymous sculptural installation, one version of which is currently on view in the Whitney’s galleries. But then there was the playlist: which were covers, and which were not? And did you dare admit to your dinner date that you’re not actually intimately familiar with Joan Baez’ oeuvre? ‘I’m seeking to establish a stress test,’ Prina told me. ‘Can what I did be lodged within a Conceptual art practice?’ The Whitney audience seemed disinclined to worry about it and, publicly at least, were only happy to show their appreciation for a fine entertainer. But one wondered whether later, when they found themselves in suave uptown restaurants and a pianist started to tinkle the ivories, they might detect the influence of Burt Bacharach or John Baldessari.