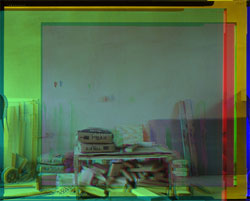 ‘Five photographers from Los Angeles’ is a deceptively simple summary of an exhibition, as the coupling of photography and LA is spring-loaded. The city is the primary organ supplying the Western world with its moving images, and still photography from the city cannot help but allude to the film industry, evoking histories and narratives in apparently inanimate scenes.

Many of the photographs in ‘Studio City’, curated by Efrat Shalem, are of LA architecture, which has, throughout the last century, become somewhat familiar to us, like an actor that always co-stars but never makes the romantic lead. We recognize the essence of the city in its wide streets, louche apartment blocks and palm trees, and can animate it with factual and fictional stories, reportage and gossip. But any darker political history of LA is bound to be eradicated by the glitzier light that bathes it; there will always be neglected nooks and crannies of lurking inhumanity. Andrew Freeman’s photographs of unassuming-looking buildings epitomize this (Manzanar – Architecture Double, 2005): prefabs erected during World War II were used as internment centres for Japanese-Americans, effectively constituting prisoner-of-war camps. Since that time they have been converted into churches and other public facilities, obliterating evidence of their oppressive past. Freeman is involved in untwining images and histories, rummaging through events that may have been overlooked or even deliberately passed over by historiography. The photograph has long since lost connotations of truth, and Freeman reasserts its opacity, suggesting that the interior of a building is as invisible as its past.

Walead Beshty, on the other hand, concentrates on the visible and celebrates overt cultural history. His formal framing of the exterior of Frank Lloyd Wright’s Ennis-Brown House (1924) reveals it as a crumbling wreck, with plants growing from its formidable concrete edifice. The place is a ruin in the tradition of 19th-century Romantics such as John Ruskin, shuttling between Utopian past and dystopian future. The house was used as a location in Ridley Scott’s film Bladerunner (1982), which seems an appropriate reference to include in an exhibition, considering the regularity with which the film is used as a cultural marker in reviews and catalogue essays – it is the classic dystopic narrative.

A more residual filmic reference can be inferred from Yanai Toister’s Tri-Channelled Composition #5 (2005). Three photographs have each been limited to a single chromatic channel and superimposed into a prismatic composite of perspective-rich landscapes. Train tracks and concrete walls draw the eye in, over the disjointed picture plane, past the ghostly train, through the conflicting paths of track and riverbed, towards the bristling skyline. The Los Angeles River looks more like an artificial bloom fabricated from concrete; essential to the city’s water supply, it has been historically problematic and is central to Roman Polanski’s fictional yet plausible story of water authority corruption in Chinatown (1974). Toister’s image is an amalgam of industrial interventions: bridges, pylons and railways representing the business end of the industrial age and communications industry, while film and photography itself, the Futurists’ tools of progress, scramble them into montage. Miles Coolidge, on the other hand, looks more directly at a personal past, reprinting a series of photographs he took around the house when he was 12. What is funny is how, when reproduced at a scale and to production values beyond the average teenager, the inflation of these adolescent images – physically and in terms of status – makes them look precisely like art. Although originally taken as an almost autistic project that pointed out dangers around the home – trip hazards on stairs, loose cabling, raw wires, precarious piles – 29 years down the line they look like much social commentary now.

James Welling’s photograms provide a curious hiccup among these images of places and spaces, and it is this discontinuity that makes the curatorial strategy here interesting, tracing multiplicities and discrepancies rather than identifying a cultural scene or an art-historical thread. The glaring formal difference in Welling’s work is its stark black and white scheme, embodying the immediacy with which the photogram is made. A pair of hands or a muddle of strips of paper, laid directly onto the photographic paper and exposed to light, is the most direct way of recording an image. In the narrative swell of the rest of the show this seems like an exclamation, an end to the illusion – the director shouting ‘CUT!’ 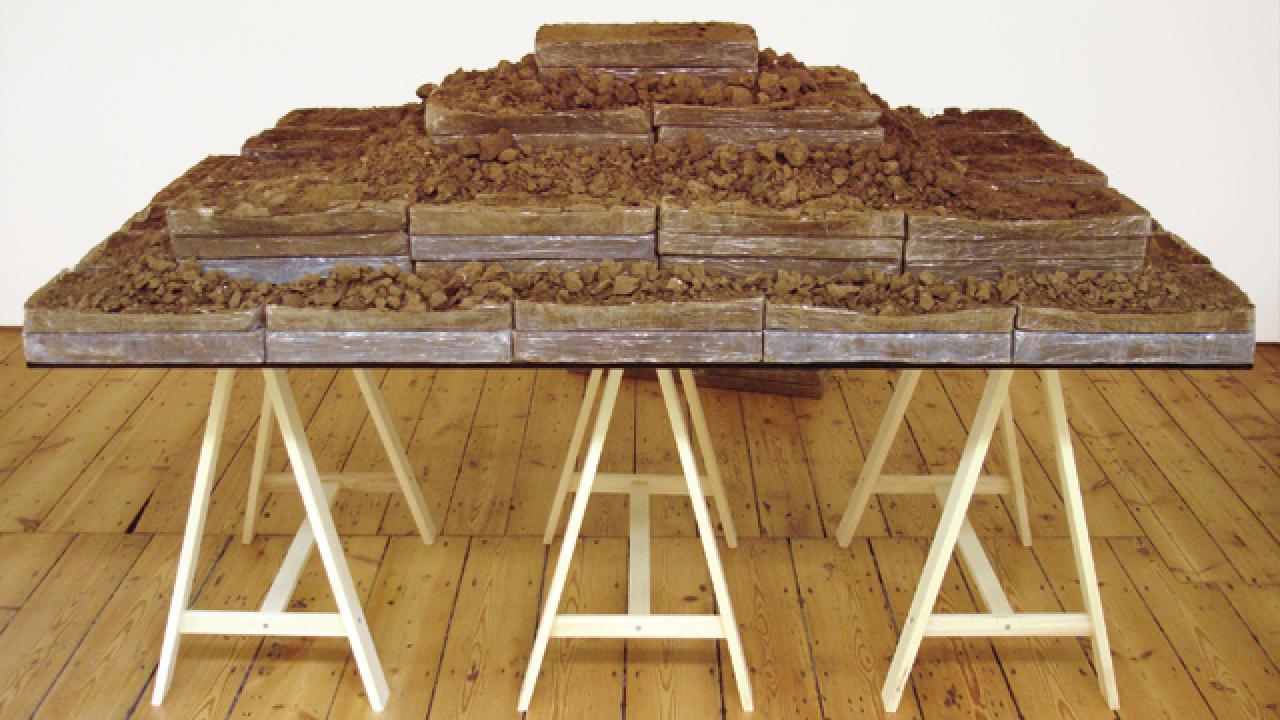 How a monumental ruin is turned into gravel, in the Brazilian artist’s show ‘Dois Reais’ (Two Reals, 2012)