The opening of UCCA, a new non-profit arts centre in Beijing, is a cause for celebration 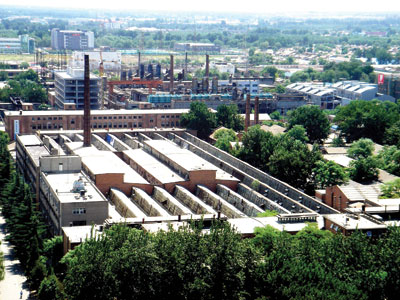 When the first contemporary galleries opened in Beijing’s 798 area in 2002, they were threatened with demolition; rumour had it they were to be razed to make way for an electronics hub. The likelihood of this happening now is remote. Apart from the recent massive boom (to put it mildly) in the popularity and market value of Chinese art, the Chinese government has realized that allowing contemporary art to flourish is great pre-Olympics propaganda; it indicates a tolerance towards dissent for which the dictatorship is, shall we say, not well known. (Let’s not forget that the face of Mao Zedong – a man responsible for around 70 million deaths – continues to smile benignly from every banknote in China. Imagine Stalin or Hitler still smiling from banknotes in Russia or Germany and the full weirdness of the situation becomes apparent.) The reality, though, is not so straightforward. Art in any public exhibition still has to be approved by the state censors, who are unpredictable in their clampdowns. 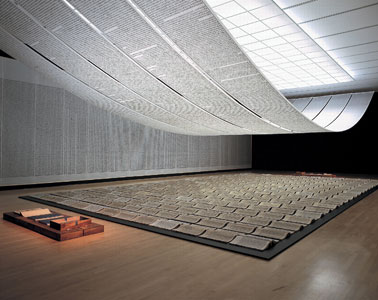 On a chilly November night in Beijing a lavish dinner for 800 people was held to celebrate the opening of the Ullens Centre for Contemporary Art (UCCA) in 798. Despite the high spirits and conviviality, it was a rather odd evening: the food was modern European, the guests were mainly Westerners, the speeches were in English and a rather cheesy Catalan performance group, La Fura dels Baus gyrated behind a muslin curtain. The mutterings about neo-colonialism were impossible to avoid. Nonetheless, the opening of the centre is, without a doubt, a good thing: it is Beijing’s first non-profit, independent art centre and intends to ‘create a platform for dialogue around current social and artistic experiences’. Architect Jean-Michel Wilmotte in partnership with Ma Qingyun sensitively converted its three enormous galleries, which cover 6,000 square metres, from a Bauhaus-style factory. The building also includes a bookshop, café and research room – the first contemporary art reference centre of its kind in China – where visitors can access a wide range of books, catalogues and journals and see changing displays of artists’ editions, ’zines, archival documents and digital media. A comprehensive public programme of seminars and conferences will also be invaluable to the city’s students and visitors. The centre is funded by Belgian collector and philanthropist Guy Ullens (who owns US Weight Watchers and, in a neat twist, also made money from sugar) and his wife, Myriam (who is working, according to her husband, on ‘changing the Nepalese education system’). Fei Dawei is the Artistic Director; Colin Chinnery, formerly of the British Council in Beijing, is the Chief Curator; and former Tate Collections Director Jan Debbaut is the Senior Artistic Adviser. In conjunction with the Ullens Foundation, which oversees the Ullens Collection of more than 1,500 works by several generations of Chinese artists, UCCA will host exhibitions that explore the collection from various perspectives, as well as showcasing new acquisitions and commissions, holding exhibitions of contemporary art from China and abroad and supporting the development of new work by emerging Chinese artists. In the words of Chinnery: ‘What’s happening right now is that the Chinese contemporary art market is overheating and becoming so speculative, and that can only be a bad thing for artistic practice because it means that there is a whole system being developed that does not encourage experimentation or risk-taking … such a commercially driven system cannot possibly bring out the full creative potential for younger artists.’ It’s a situation UCCA hopes to alleviate.

The inaugural show, ‘’85 New Wave: The Birth of Chinese Contemporary Art’, included 30 artists (many of whom are now hugely wealthy artist superstars) and 137 works. The exhibition was the brainchild of Fei, who in 1989 moved to Paris, where he introduced members of the Chinese avant-garde to the exhibition ‘Magiciens de la Terre’, held at the Pompidou Centre in the same year. The 1980s in China was a period without galleries or support – financial or otherwise – for art. Nonetheless, it was a time of fertile artistic discovery, a moment that Fei states ‘represented a kind of explosive answer to the Cultural Revolution of the 1960s and ’70s, when China was not only cut off from the rest of the world but was also forced to disown and renounce its own culture’. The work included in the show was made at the crest of the student democratic movement, which was to end in the brutal suppression of civil liberties, state murder and the imprisonment of activists after the demonstrations at Tiananmen Square – a fact the Chinese government still refuses to acknowledge. Coming cold to such an exhibition without a specialist knowledge of this volatile and deeply complex period in Chinese art is difficult: as Fei remarks, the decade ‘marked the end of a monolithic artistic model, achieving unprecedented freedom and opening a path for Chinese art to march toward internationalization and contemporaneity’. Despite, however, the volatility of the period, examples of rather second-rate neo-Expressionism, one-liner politics and lame neo-Conceptualism abound – which is understandable given that this was a generation of artists who, in isolation, developed a new artistic language from the embers of Socialist Realism. The highlights of the show, however, were worth the trip. They included: the deadpan paintings of rubber gloves by Zhang Peili (who was also the first artist in China to use video); the documentation of actions by the Xiamen Dada group, including Huang Yongping’s The History of Chinese Painting and the History of Modern Western Art Washed in a Washing Machine for 2 Minutes (1987–93); Xu Bing’s fascinating 50-foot-long printed scrolls of invented calligraphy A Book from the Sky (1987–91); Shen Yuan’s untitled and sinister piece from 1985 that comprised fish in a plastic mattress left without air to die; Wang Guangyi, who blocked out sections of old master reproductions with industrial paint; and Wei Guangqing’s photographs documenting his performance Suicide Plan about Oneness (1988).

For the opening UCCA also invited Lawrence Weiner to create a new large-scale work – the artist’s first work to be made in China and the first in a series of pieces the centre aims to commission. Optimistically entitled TO ALLOW THE LIGHT, the work combines lettering and graphics, in both English and Chinese, and emblazons the back wall of the UCCA nave. With the prices for Chinese art going through the roof, and hundreds of new studios, galleries and private art museums opening around the country – many of which apparently have nothing to fill their huge spaces with – contemporary art in China has never been in more dire need of serious curating, scholarship and criticism. It is a timely moment for a show such as ‘’85 New Wave’ and for a non-profit centre devoted to the discourse about contemporary art in this rapidly changing but still totalitarian country. Discussions around Chinese art now need to be focused on more than auction prices. What UCCA does with such potential remains to be seen.