‘I have never been interested in verticality,’ beamed Thomas Bayrle to a very small audience at the Fogo Island Inn. ‘Horizontality is my trade.’ At 80 years old, the artist has earned the right to be dogmatic. Bayrle and I met on the remote Fogo Island, off the coast of Newfoundland, Canada, as part of the Fogo Island Arts residency – where, amongst other improbable activities, we tracked the daily movement of icebergs along the coast. Alongside Helke Bayrle, his partner in life and art, we began a long conversation around art education, the history of the Städelschule in Frankfurt, Germany, and’Playtime’, Bayrle’s current retrospective at the New Museum, New York.

Janique Vigier I recall reading a quote from Martin Kippenberger in which he said that he wanted to make the art world a place he would really want to be a part of. What world did you seek to create – or what conditions did you seek to make possible – with your work with Städelschule in Frankfurt from 1975 to 2002?

Thomas Bayrle: In the 1970s, Frankfurt was a not a place for art. It was a place for literature, it held an annual book fair, and it had a university, where important Jewish professors came back to after the war. It was a very political town, but one could hardly find any artists, unlike in in Köln or Düsseldorf where, in those days, The Zero group and a bit later [Gerhard] Richter, [Sigmar] Polke, and [Konrad] Lueg performed vehemently.

Together with my wife Helke, I developed a friendship with some writers and agitprop artists including Bazon Brock and the artist Hermann Goepfert, as well as concrete poets Franz Mon, Adam Seide, and Rochus Kowallek, who had already opened his Gallery Dato, the only ever reasonable gallery after 1960. Adam Seide introduced us to Peter Roehr who turned out to be a very important artistic influence on me and my work. Beside the book fair, there was the intellectual influence of the University, where a small group of ‘homecoming professors from America’ , such as Theodor Adorno, Max Horkheimer and Herbert Marcuse, changed everything, developing the ‘Frankfurt School’.

Frankfurt itself was the most American city in Germany, in a pretty vulgar way. Open to copying everything American after the war, it was cheap – everything was trial and error. To me in 1960 Frankfurt was a kind of ‘good impossible place’. It seemed naïve in a good way compared to other cities: it had a self-destroying anarchistic quality, in the sense that Frankfurt did not try to reconstruct what had been lost but replicate the model of a business town from other cities in Germany. As an artist living there in 1965, I felt isolated but independent.

The Städelmuseum and the Städelschule had been focal points for 200 years, but had long been sleepy and conservative. This changed completely in 1988, when Kasper König was invited to become the director at the Städelschule. König was able to invite good artists and very good teachers from all over the world to come teach at the centre, including Jörg Immendorf, Per Kirkeby, Hermann Nitsch, Lawrence Weiner and Franz West. From that point on, we all worked slowly but steadily to change that small institution. This school, which did not have a reputation before, soon became very significant internationally. Eventually, Portikus was founded as an autonomous kunsthalle, independent of the school and the City of Frankfurt. The school sparked that change in Frankfurt, from a city of literature, a city for jazz, a university city, into a city that at last has something new to say about art.

JV There’s often an idea that students follow in the footsteps of their professors, but your students seem emphatically idiosyncratic. Is there a school of Thomas Bayrle? Or maybe otherwise put, what was your teaching methodology?

TB I never had the feeling that I was 100% an artist. I was always having doubts, on the edge of being maybe a commercial artist. I gave these doubts to my students: to not only blindly believe in models that were given, but to question and push against them. We [the professors at Städelschool] didn’t fit the model of successful artists. We had a lot of doubts, a lot of outside interests, different moods and different tasks which other schools couldn't allow themselves. I thought of all my students individually. I talked to each of them in a very different way. I never thought that an art school should be full of students who follow the same rules. I wanted to create a total free nest, full of contradictions in the middle of its existence. I wanted to find and support each student’s contradictions. And maybe this was only a possibility at the Städelschule. For decades it was funded by private donors, not by the government. When you have a private school and are not controlled by the state you can set your own terms. And nobody tells you what to do. You tell yourself what to do.

JV What is the place of doubt in your work?

TB Doubt can be very positive. You have a few things you can depend on, and the rest is doubt (at least in my case). So with my students I tried to make doubt productive – by twisting patterns around. As the Norwegian architect [Eero] Saarinen said: ‘If something is too long, make it longer….’

JV Your current exhibition at the New Museum in New York takes its title from Jacques Tati’s 1967 film Playtime. Your works share many parallels, including your technical experimentation and a critique of modernization, of increased productivity and consumption in post-war Europe. I think of Tati as a comedic historian of postwar Europe. Do you consider yourself a historian?

TB The title ‘Playtime’ was the best the museum could apply to my not-so-clearly-defined practice! For a long time I worked in the commercial realm. I did something very uncommon in the 1970s, which was to straddle the commercial world and contemporary art. Early on in my career, I developed a program called Children’s Planet (1970). Together with students from Offenbach University of Art and Design, we organized a huge fair for 30,000 children in and around Frankfurt, who could not afford to go on vacation. It concerned photography, sculpture, all artistic mediums, but ultimately it was social work, which lasted over 6 weeks. Usually artists work only for themselves, or work only for galleries. In my case, I started to work rather late with galleries. I did freelance work in between commercial things, free art, and art in the social field.

JV Seeing the repeated images that make up your ‘superforms’ – as in, for example, the image of La Vache Qui Rit in Kuhmäden (Cowgirl, 1967) – has a strange effect: the smaller images become abstract, the iconic symbol becomes unfamiliar. If repetition in advertising is used as a means to drill in a point, have you sought to use it as a method of de-familiarization?

TB Very early in my work I used ‘dots’ to compose grids to stand in for concrete masses, mass- produced things like cars, cups and cows. My intention in doing this was not critical, but rather a comic variation – to present a double pack of information, a certain narrowness of meaning being graphical enriched. When these tiny, already complex accumulations flipped nervously in ‘Superforms’, they doubled, or even multiplied relations among information. Later on, when I used the objects themselves as bricks for Superforms, they graphically really bounced. Such cow grids kind of hacked into different sizes and structures of graphical networks – doubled them and defined them in a comic way. The whole intention was about bouncing into accumulation of information – to compile walls of information to enrich the grid.

JV The relationship between religion and the technological –– or the takeover of the technological from the spiritual – has been an ongoing theme in your work. I was struck by the particular religious iconography in the textile work at the New Museum, particularly that of the Pietà, the definitive image of a grieving mother. Why or how did you come to work with this image?

TB I see religion and technical developments existing as two sides of the same coin since Gothic times. The construction of the first Gothic cathedrals a thousand years ago was, as Wilhelm Worringer argued in 1913, the first time humans worked with ‘engines’ –  full-scale ethical and technical creations. I see this development as continuous to the conveyor belts of our car factories.

When I made up my mind to ‘produce’  a series of pietàs, I had the technical methods of our time in mind. Using all means of reproduction, montage and grid building – graphical mass- production – I still had the singular reality of each centimetre in mind: everything is singular! Everything looks the same – but nothing is the very same! This is even truer in how the carpet was ultimately made: it was produced in Aubusson, France by a traditional weaver, whom it took four months to complete. That 500 hundred-year-old technical mentality of ‘all similar, nothing the same’ precedes even Michelangelo as the ‘main engine’ of Western society, the metaphorical ‘car’ of our culture!

‘Thomas Bayrle: Playtime’ is on view at the New Museum, New York until 2 September.

Janique Vigier is a curator living in New York. 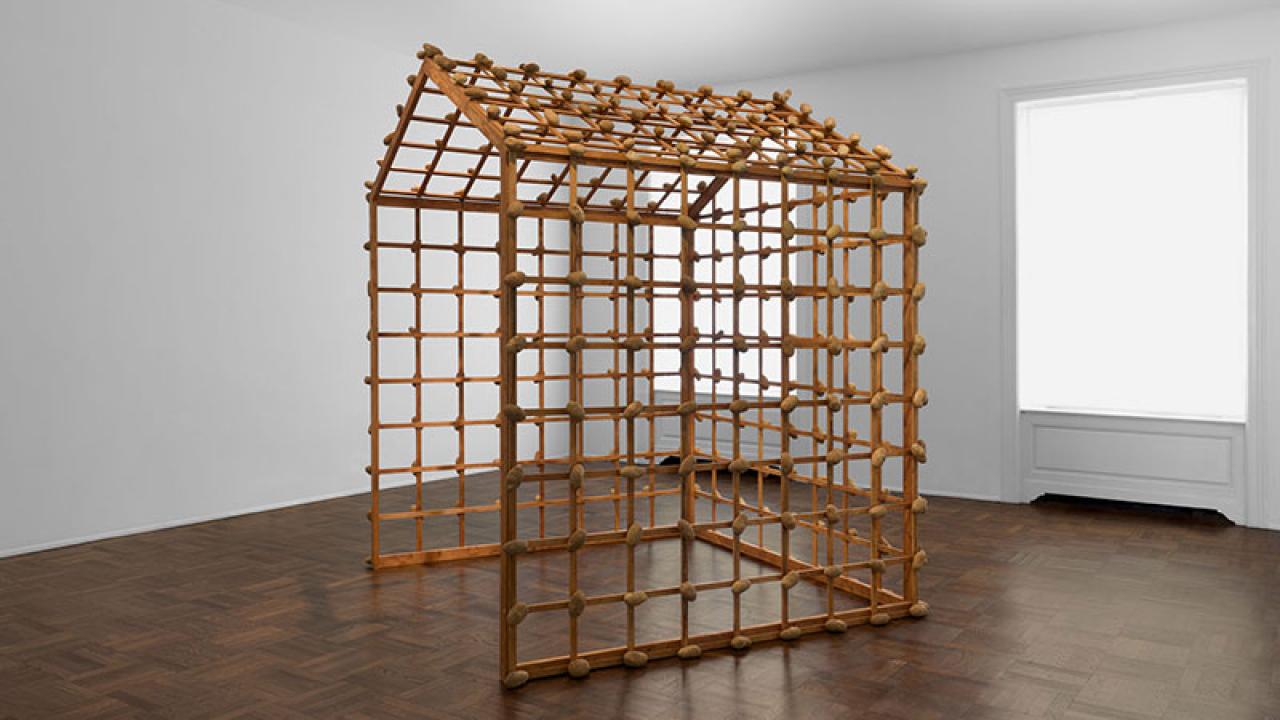