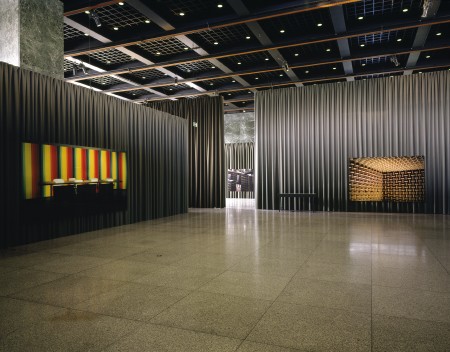 The precise technique that Thomas Demand has employed since the early 1990s to make his works is well known. Using a labour-intensive process, he constructs an accurate scale model − based on a media source − from paper, photographs it and displays the resulting large-format image sealed between aluminium and Perspex (the original model is destroyed). This forensic approach elicits a fascination which usually focuses on two areas: peering at the picture’s surface for hints that reveal the material truth behind the convincing construction; and the search for clues as to the origin of the − usually culturally loaded − image.

In this retrospective of sorts, which revisits 40 works from the past 15 years, these two approaches are overshadowed by a rigorous insistence on the works’ staging of reality: an effect that is largely due to the exhibition being located in Berlin’s Neue Nationalgalerie − Ludwig Mies van der Rohe’s magnificent glass and steel box. Rising to the challenge of installing two-dimensional work in this airy wall-less building, Demand (together with London-based architects Caruso St John) opted for curtains rather than free-standing walls: lengths of weighty grey fabric fall in regular folds to define the space, while adding to the pictures’ claustrophobic atmosphere of shrouded meanings and secrecy. The absolute precision of the installation answers that of Mies’ building, creating a clean structure of horizontal and vertical planes that itself appears like a model, in one-to-one scale, while the building’s surfaces of marble, wood, glass, steel and fabric find a mirror-image in the spotless paper surfaces of Demand’s photographs. With the focus thus drawn away from the constructed images’ trompe l’oeil effects, a constant shift in scale and attention occurs.

This existential train of thought is reinforced by ‘captions’ that Demand has included − for the first time − and that accompany each work. These comprise commissioned texts by Botho Strauß: a German author who originally rose to fame in the 1970s for his radical left-leaning plays and who later became a politically controversial spokesman for cultural conservatism. Demand’s titles – Studio (1997), Room (1996), Staircase (1995) – are as studiously devoid of superfluous information as are the works themselves, so the offer of additional text is alluring.

Such hopes are thwarted by these texts, however, which are printed in thick black Helvetica (Demand’s preferred typeface) on the otherwise blank pages of large white books and displayed in dark grey, table-like vitrines. Studio, an early piece showing a conference table with four chairs before a large screen in rainbow stripes of colour, displays all the contradictory spectacle, precision and reticence of Demand’s best works. But the accompanying text, rather than elucidating the picture’s origins − the television studio set of the German version of What’s My Line? − instead echoes the viewer’s own uncertainty: ‘And what are you seeing? You are watching your own forgetting. Yes, you are gazing out upon the river of forgetfulness.’ The captions are almost red herrings: ranging from metaphysical contemplation to banal platitude to anecdotal narrative, they provide oblique commentaries that constantly throw the viewer back onto his own resources of philosophical, cultural or personal reference. Again the viewer is led away from a tight analysis of the picture’s content towards the thought processes that the works engender, and to the issue of memory and association as an individual as much as a collective phenomena.

These two strategies create a rigorously controlled atmosphere within which the associative impact of the exhibition’s title, ‘Nationalgalerie’, and the selected works, all of which bear some relation to Germany, come into play. Representing sites of Demand’s own childhood (Kinderzimmer, Nursery, 2009 – his childhood bedroom) or historical events (Room, 1994, site of a failed assassination attempt on Adolf Hitler) or recent history (Klause IV, Tavern IV, 2006, scene of a child abuse case widely covered by the press), the photographs address the loaded theme of German national identity from a number of angles at a poignant time: as well as the recent change of government, this year has witnessed the 60th anniversary of the founding of the Federal Republic and the 20th anniversary of German reunification. A series of weekly lectures titled ‘How German Is It?’ accompanies the show, engaging luminaries such as philosopher Jacques Rancière, Christian Democrat Union politician Bernhard Vogel and former Red Army Faction member Astrid Proll to examine the troublesome topic of ‘the German question’. Lurking beneath the apparently descriptive title ‘Nationalgalerie’ (displayed, incidentally, in huge Helvetica letters on the museum façade), therefore, is a pointed and problematic intention. Mies’ glass pavilion becomes a platform on which Demand presents a portrait of a nation, framing himself as a kind of national artist laureate.

While Demand’s clean remodellings may echo the physical reconstruction of a country devastated by war, they refer as much to the problematic reconstruction of a blemished national identity. However, though their creation may constitute an act of remembering, their diluting of details and erasure of significant content are all about forgetting; about the inheritance of this national identity by a generation too young to remember the war, or the Red Army Faction, or a divided Germany, or What’s My Line?. After all, whether or not the picture of the aeroplane steps (Gangway, 2001) makes you think of the hostage crisis of the early 1970s depends as much on your age as your nationality. Here, in this carefully staged environment, the works seem all about the repression of information: meaning disappears within orderly surfaces, memory is swapped for archives and architectural finishes; the stand-in usurps the subject.