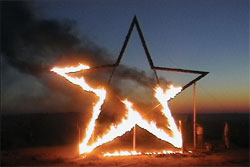 Getting around Tirana, Albania’s capital, is hair-raising. Traffic lights have only recently been introduced, and many of the roads are in the process of being rebuilt. Transport, though, is the least of the city’s problems. Since Albania ended 47 years of isolationist communist rule in 1990, it has had to deal with economic chaos, massive unemployment, widespread corruption and organized crime. Recent elections, however, were judged to be fair, and in 2005 the centre-right Democratic Party gained power.

Despite its turmoil, Tirana throbs with optimism. This has much to do with its extraordinary mayor, former artist Edi Rama, who, when elected in 2000, had many of Tirana’s crumbling tower blocks painted in riotous colours – a joyful gesture in a country so dour that, during the communist era, it banned the saxophone. In 2001, in association with Giancarlo Politi of Flash Art magazine and supported by Rama, Tirana held its first biennial. Despite having no contemporary art infrastructure, initially the show appeared to be a well-deserved celebration of Albania’s burgeoning art community. Yet it was to become, as one of its directors, Edi Muka, put it, a reflection of ‘the neo-colonial nature of the context in which Tirana and its art scene found themselves’. While stressing that without Politi’s involvement they would have been unable to stage the event, fundamental differences arose, and the tale took a peculiar twist when Politi copyrighted the exhibition title. When I contacted him to verify this, he replied: ‘As the TIRANA BIENNALE brand belongs to me, now I would like to ask anyone who wishes to use it, to buy it from me at a reasonable cost, so as to compensate some of the costs of the first edition.’ At time of writing Politi is contesting the Biennale’s legality; nonetheless – aptly titled ‘Taboos’ – it still went ahead.

‘Taboos’ comprised five ‘episodes’, with each show adding to the next. Put together on a shoestring budget, it was rambling, uneven and full of energy. It opened with ‘Temptations’, curated by Muka and Gezim Qendro, followed by Roberto Pinto’s ‘To Lose Without Being a Loser’, Zdenka Badovinac’s ‘Democracies’, Joa Ljungberg’s ‘Bittersweet’ and finally Hou Hanru’s ‘Go Inside’ – all loosely dealing with individual and state relationships, from race and sexuality to economics, religion and the role of the imagination. The show was held in two locations: among the Socialist Realist collection of the National Gallery of the Arts and in the cavernous basement of the Villa Goldi, a building site on a potholed road. To celebrate diversity of expression in the midst of images of old-school communist rhetoric and a building emerging from rubble was achingly apt.

Apart from a few well-known names, such as Olafur Eliasson, whose crowd-pleasing The Collective Project of Tirana (2005) comprised three tons of Lego bricks from which visitors were encouraged to build a new city, many exhibiting artists were from the Balkans and China. Unsurprisingly, given the Biennale’s volatile location, many works explored change and the crisis of the political present, concerns neatly embodied in Armando Lulaj’s powerful video of a communist star burning on the hills outside Tirana, Te jetosh ne kujtese (Living in Memory, 2004). However, complex political issues were occasionally flattened into simplistic one-liners, as in much of ‘Bittersweet’, where women were pictured repeatedly as victims. While it is understandable that in the early days of freedom from censorship, criticism of contemporary politics is vociferous – Albania’s horrendous record of sex trafficking is under-discussed in the national media, and to have work in the public domain exploring issues surrounding it is obviously worthwhile – blunt and reductive statement of fact does not necessarily make for great art.

By contrast, a project by Slovenian artist Tadej Pogacar, Code: Red Tirana, te mbijetuarut (Survivors, 2005), included in ‘Democracies’, was a sobering reminder of the imagination’s role in recovery: the work is a collaboration with Albanian women, now in safe houses, who were forced into prostitution. Their large installation of meticulously handmade clothes and toys for sale was both moving and pragmatic. Other highlights included: Stefano Romana’s project about building an imaginary bridge to Italy, Noi Amiamo l’Albania (We Love Albania, 2005); Father (2005), by Cao Fei, a Chinese artist whose film about her father, a Socialist Realist sculptor who was commissioned to make a sculpture of Deng Xiaoping, explores with the lightest of touches the collision of personal and political histories; Minaret (2005), by Michael Rakowitz, an American artist of Iraqi Jewish heritage, who clambered up the former mausoleum of Enver Hoxha (Albania’s atheist dictator) and broadcast the Islamic call to prayer; and Edi Hilla, a 61-year-old Albanian whose melancholy paintings of everyday Surrealism – a boy playing pool in an empty park, bright umbrellas next to a shipwreck – are a rich lesson in subtlety.

In Marjetica Potrc’s animated film about Albanian relocation from the countryside to cities Population Movements: Albania Case Study (2005), maps mutate, reflecting socio-economic shifts. I could imagine a similar map being made of the Tirana Biennale – an event that is working hard to define itself, that has had no time or money to become complacent, and which is, in the best sense, attempting to articulate art’s role within a rapidly changing culture. Its organizers should be saluted for achieving so much, with so little financial and critical support.