Tony Conrad and Faust at the Berlin Atonal Festival, 2015 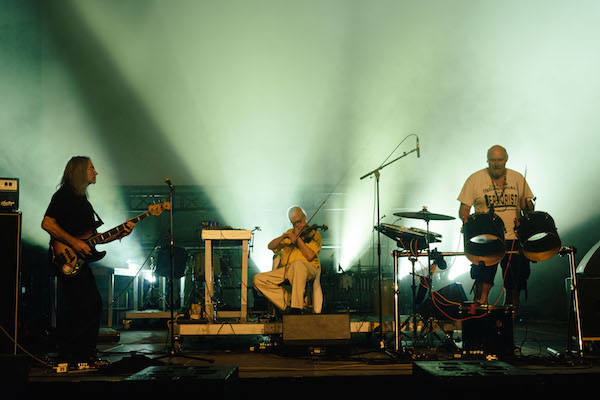 Prior to meeting Faust in 1972, Tony Conrad was engaged in exploring this idea of boundlessness with The Theatre of Eternal Music, a group composed of La Monte Young, John Cale, Angus Maclise and Marian Zazella. After two years, Conrad left the group in 1965 amid growing frustrations with what he once called Young’s ‘ego-centric mysticism’ as well as their extended disputes over intellectual ownership: Young has withheld hundreds of hours of group recordings from the other members. The musical path that Conrad embarked upon after his departure – in contrast to the territory explored at the time with Young – attempted to reach the sublime via more immediate and quotidian means.

The collaboration between Conrad and Faust – instantiated anew as a performance late last August in Berlin as part of the Berlin Atonal Festival – for its part, had its origins in a 3-day recording session in 1972 at the Polydor Records-funded commune studio of Faust in the village of Wümme in northern Germany. The resulting album, Outside the Dream Syndicate (which additionally featured Rudolf Sosna on keyboards) reconfigured the sparse and restricted minimalism practiced by La Monte Young, opening up the sonic register into more visceral forms. A strict conceptual implementation of droning violin, one-note bass and rhythm was maintained on the side-long opening track From the Side of Man of Womankind, whereas Faust had more presence during the twenty-six minutes of From the Side of the Machine – sliding into minimal rock, with short repetitive melodic bass lines, but still significantly more subdued than the independent output of either.

A melding of both approaches was on display in the turbine hall of a decommissioned power plant, the Kraftwerk Berlin, that served as the main stage of the festival. Berlin Atonal was held annually between 1982–1990 in Berlin-Kreuzberg before being brought back to life in 2013. Performing from the album for the first time in 20 years, Tony Conrad, wearing a wearing a white suit and a Homburg hat, opened the performance with deliberate, long bowing of a single violin string, establishing a tick of rhythm upon each directional shift of the returning stroke. 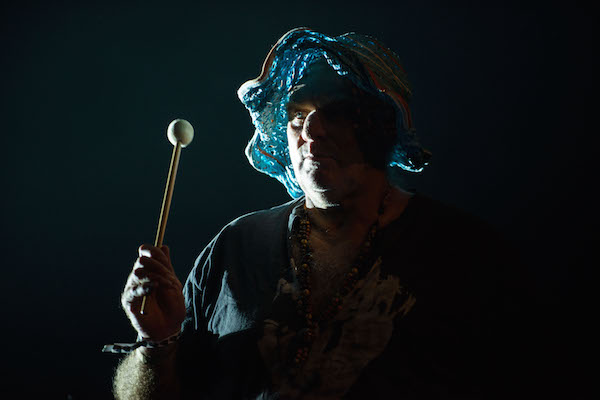 Conrad – whose technique has not significantly diverged since his recording of Four Violins in 1965 – relies heavily on pure intonation (as in Indian classical music). By tuning at specific frequencies, rich harmonics and combination tones are produced almost by default, allowing for Conrad’s vigorous exploration of the violin’s sound. Conrad employs a technique of seamless overdubbing (a discrete loop point is never heard), which he has referred to in interviews as a temporary ‘archiving’. Through these means, the initially familiar sound of a bowed string gives way to modulating humming and buzzing tones; the original character, the intrinsic acoustic properties of the instrument, are never lost.

In the performance here, after this sonic ‘ground’ was established Conrad was joined on either side by Werner ‘Zappi’ Diermaier and Jean-Hervé Péron of Faust on drums and bass guitar, respectively. The addition of Faust – as in the album – provided a rupturing force, the ‘outside’ mentioned in the record’s title, in the form of a sudden, pounding metronomic rhythm, often called ‘motorik’ in Krautrock parlance. Atop Conrad’s drone, Faust over-articulates the tempo with an imperfect manic percussive insistence; stasis becomes a form of movement and vice versa, all channelled through a rock idiom. The rhythm fluctuates between uniform ostinato and a tripping-over-itself rubato, imparting the sense that the music is self-propelled, inevitable, bound only by the physical limits of performance. In an interview from the Faust Mailing List in 2004, Péron humorously recalled blood dripping onto his feet during their previous performance in London in 1995, while fretting over cleanly striking a granite cobblestone to signify the end of the performance. Here, the occasional cymbal crash provided a marker along a long spiral, a marker that is soon lost along a continuum – much like a musical Shepard tone, which never reaches a climax. The best moments sounded like an electrified hoedown – magnetic bundled strands of sound that were driven forward with an irrepressible marching ur-rhythm.

As in past performances, including one staged in 2008 at the Tate Modern, Conrad employed light projections to cast his enlarged silhouette onto a white scrim. In this instance the shadows were cast down the hundred meters of the hall, onto the back wall, where the silhouetted form of drummer Werner Diermaier, cave-like and as if fire-lit, pounded out the beat, while exaggerated frenetic shapes mimicked his movements. The effect was both comical and menacing. 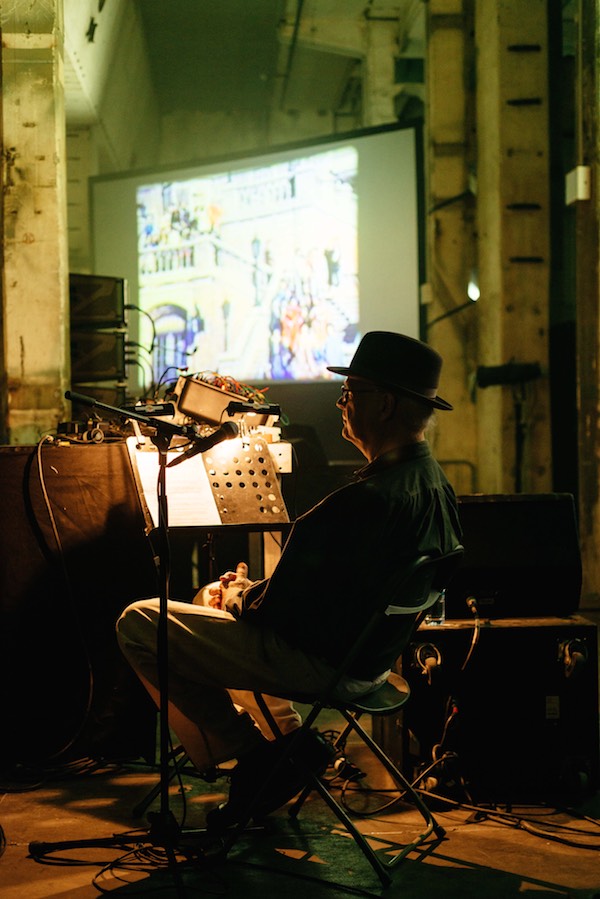 Perhaps due to the enormous size of the hall, only a few moments reached a level of bristling synaptic intensity. Or was this due to the relative security of the nostalgic re-performance of a now classic album? (The enveloping sound structures of Maryanne Amacher, or even Eliane Radigue, function, in contrast, without a performer, and thus can achieve a more austere and higher intensification of sound.) As much as Conrad aims to divest himself of compositional authority, this performance remained highly staged, replete with inbuilt hierarchies, beginnings, endings, costumes and shadow play. Still, this form of theatricality propagates at its core an egalitarian form of listening: a partial dismantling (albeit illusionistically), of the performer-audience relationship through Conrad’s use of simple theatrics and unembellished musical techniques.