Top Ten Shows from Around the World

Lynette Yiadom-Boakye, Tate Britain, London, UK
‘Lynette Yiadom-Boakye’s mid-career retrospective, “Fly in League with the Night”, opens with a work I keep returning to,’ Aurella Yussuf writes. ‘In Black Allegiance to the Cunning (2018), a beaming young man in a deep-sea-green shirt, welcomes me into the space. He is perched on a stool with a fox at his feet, his mischievous grin reminding me that I am just a visitor in this fictional world. Yiadom-Boakye’s figures have a warm and intimate relationship to each other that we can only observe. It is like being a plus-one at a party where you don’t yet know the host or the rest of the guests – you’re just at the precipice.’

‘Memphis: Plastic Field’, MK Gallery, Milton Keynes, UK
‘Can we imagine a new world simply by designing a new chair?’ writes Alice Bucknell, quoting the French industrial designer Martine Bedin on the evening the Memphis Group formed in a smoke-filled Milanese apartment in 1980. ‘Disillusioned with a modernist utopia that never arrived, the 56 international designers who comprised the loose group championed bad taste and dreamed of a design revolution.’

Kai Althoff, Whitechapel Gallery, London, UK
‘As if its full intensity would be too much to bear, Kai Althoff’s smouldering art comes damped down as standard,’ Nicholas Hatfull observes. ‘The swathe of more than 60 works nestled beneath is resolutely diffuse in tone – magical realism, preciousness, mischief and diffidence make themselves variously known. Its aftereffect recalls “that strange, charmed, slightly frightening feeling” left by dreams, as described by Brian Eno in a 2020 BBC interview.’

Nathalie Du Pasquier, MACRO, Rome, Italy
It’s only been a few days since museums in Italy were allowed to open again to the public, so the launch of Nathalie Du Pasquier’s exhibition at MACRO – the artist’s first Italian institutional show – has been greatly anticipated. Conceived as a Gesamtkunstwerk, the exhibition features more than 100 works, dating from the 1980s to the present day, in a dazzling confluence of colours, forms and patterns. In a feature from frieze issue 174, Du Pasquier writes about her influences and how her move to Milan shaped her practice: ‘Milan was the perfect place to discover the stylistic evolution of the 20th century, and to work out what it meant to be contemporary.’

Rebecca Ackroyd, Peres Projects, Berlin, Germany
‘Since the beginning of the pandemic, multiple reputable media outlets have reported on a global increase in people experiencing vivid and unusual dreams,’ reports Chloe Stead. Reviewing Rebecca Ackroyd’s solo exhibition, “100mph”, Stead writes, ‘I’d wager that this nocturnal shift has also happened to the Berlin-based artist. Nowhere is this as clear as in the show’s titular work, which depicts some of Ackroyd’s lockdown dreams in a series of pen and coloured pencil drawings on paper.’

Wu Tsang, Lafayette Anticipations, Paris, France
We carry with us ‘an infinitely mutable mosaic of identities’, writes Wilson Tarbox in this review of the exhibition by filmmaker and performance artist Wu Tsang and her multidisciplinary collective Moved by Motion. ‘In The Show is Over (2020), a collaboration with Tosh Basco, dancers glide across a dark stage. The anxious tension of this scene is mediated by two voices, one softer and more effeminate, the other a baritone, reciting passages from Fred Moten’s poem ‘come on, get it!’ (2018). [These snippets] roll to the rhythm of Beat poetry, channelling the rebellious, counter-cultural energies and reviving them with allusions to the Black Panthers and Marxism.’

Salman Toor, The Whitney Museum of American Art, New York, US
‘I don’t remember precisely when I first saw Salman Toor’s paintings,’ writes Tausif Noor, ‘but I do distinctly remember how I felt in that moment: a particular flash of recognition, a momentary illumination that results from seeing and being seen.’

‘Marking Time: Art in the Age of Mass Incarceration’, MoMA PS1, New York, US
‘“Mass incarceration”, a phrase that has gained much purchase in the last two decades, features prominently in the title of this exhibition and book published by Harvard University Press,’ Catherine Damman writes . ‘Both are the culmination of more than ten years of effort by Nicole R. Fleetwood, Professor of American Studies and Art History at Rutgers University. Describing a phenomenon that began in the late 1960s – in which the prisons system ballooned exponentially – the term ‘mass incarceration’ is sometimes poorly interpreted, taken to mean that the problem is only one of scale or degree, not of kind. Today, many are convinced that there are too many prisons and too many people in them; far too few are convinced that there should be no prisons at all.’

Genesis Belanger, The Aldrich Contemporary Art Museum, Ridgefield, US
‘I’ve never wanted to put an artwork in my mouth more than Genesis Belanger’s stoneware devilled eggs,’ writes Will Fenstermaker in this review. ‘I think she’d accept that as a compliment – or at least feel that I’d fathomed the spirit of her delicate sculptures of victuals.’

Haegue Yang, Art Gallery of Ontario, Toronto, Canada
‘Rather unceremoniously, Haegue Yang’s retrospective, ‘Emergence’, at the Art Gallery of Ontario greets the visitor with a selection of sculptures made in the last decade,’ writes Charlene K. Lau in this review – ‘goofy monsters crafted from all manner of everyday things, including bells, straw, food-truck ventilation fans, ski jackets and a towel printed with the outsized image of a US$500 bill. But installed here on an elevated platform, rather than on the floor as they usually are, these anthropomorphic and zoomorphic alien forms seem too precious.’ 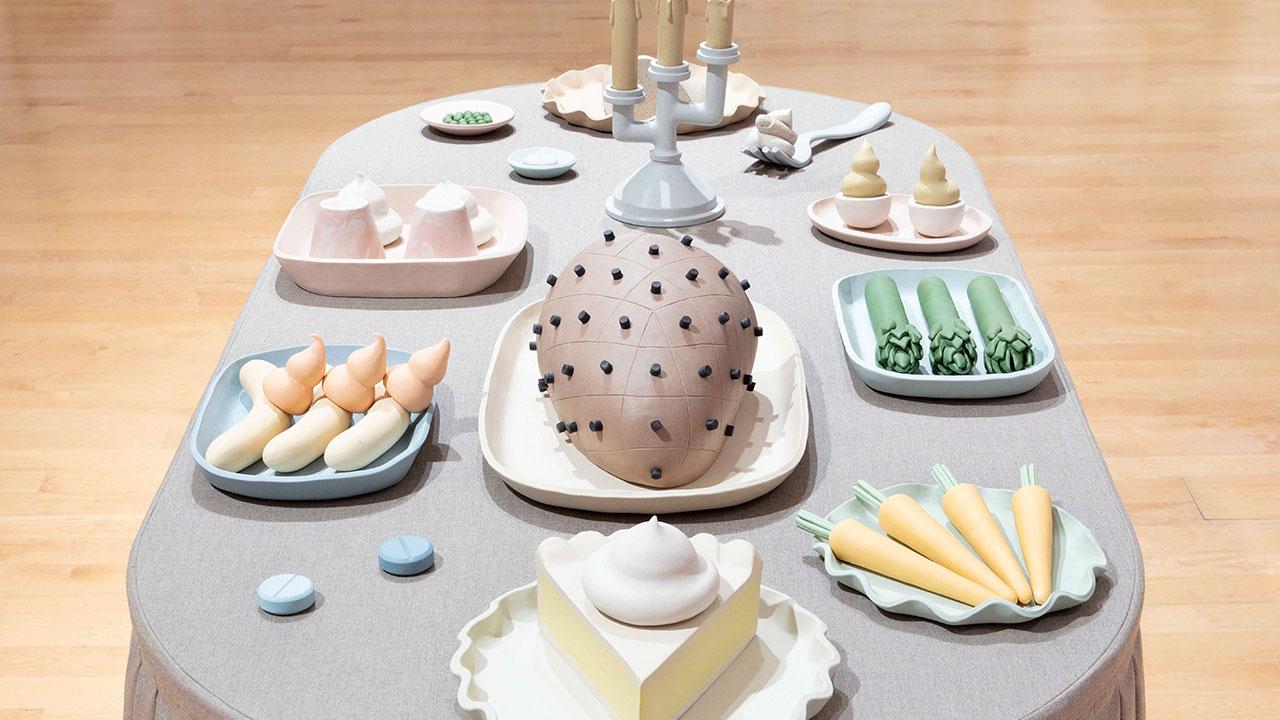