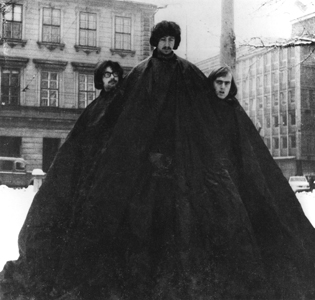 On 30 December 1968, at the conclusion of a tumultuous year replete with student protests and demonstrations, three members of the pioneering Slovenian artist collective OHO staged a performance in Zvezda Park, Ljubljana’s major city square. Draped in black, the three artists arranged their silhouetted figures to replicate the craggy outline of Mount Triglav, a symbol of Slovenian national identity, with their heads alone uncovered. In doing so they not only recreated the contour of the peak but also created a literal representation of Triglav, which translates as ‘Three Heads’.

Titled simply Mount Triglav, the performance sought to undermine the ratified emblem of Slovenian identity: the mountain – which graces Slovenia’s national flag, coat of arms and new 50 Eurocent coin – has remained a constant throughout the country’s shifting identity as a part of former Yugoslavia, as an independent nation and as a member of the European Union. OHO’s performance seemed both to inhabit the national symbol and to and claim it for itself, replacing the anonymous peaks of the mountain with the faces of 1960s’ counterculture.

At the same time Mount Triglav also engaged in a far more subtle interrogation of the enduring power of the symbol. The performance reflected OHO’s overriding concern with the life of objects and the objectification of the human that is oftenat the core of symbolic power. Mount Triglav framed some of the individual faces often caught in the abstractions that necessarily accompany any notion of collective national or political identity. It also queried art’s capacity to generate symbolic meaning within that particular discourse.

‘Triglav’, a recent exhibition at the Mala Galerija in Ljubljana – the project space of the Moderna Galerija – emphasized the performance’s ethos of transformation and the enduring power of any object endowed with symbolic meaning. The starting point of the exhibition was the presentation of the original OHO performance, in the form of a grainy black and white film and a small black and white image, hung inauspiciously at the entrance of the gallery. Tracking the extended life of the 1968 performance, the exhibition featured reinterpretations of the work by IRWIN, the artist collective that first rose to prominence in the 1980s, and by Janez Jansa, Janez Jansa and Janez Jansa, a more recently formed collective of young artists who have adopted the name of the current prime minister of Slovenia. The exhibition was thus a nicely cross-generational affair, exhibiting shifts in a socio-political discourse not only specific to Slovenia but also characteristic of the global art-historical language of recent decades.

A reproduction of the original OHO performance by three members of IRWIN, Like to Like/Mount Triglav (2004), keenly illustrates the way in which attempts at re-enactment depend heavily upon their historical contexts. Indeed, the very documentation of IRWIN’s repeat performance reveals the generational difference between themselves and OHO: the flawless, large-scale photographic prints that record Like to Like/Mount Triglav mischievously reference the imperatives of high production values and commercial needs that have increasingly attached themselves to the task of documentation. Presented as a deliberate counterpoint to the original, small-scale, black and white OHO photograph, the colour record of IRWIN’s performance implicitly declares the impossibility of a fixed context – temporal or otherwise – and thus of any exact re-enactment.

Collectively, the three pieces communicate the ways in which the interpretation of symbols acts as a form of cultural inheritance. And while the playful recycling proffered by both IRWIN and Janez Jansa, Janez Jansa and Janez Jansa indicates a subtle alteration of meaning and context, what is perhaps most acute is the final fixity of the emblem of Triglav itself. Although the mountain’s meaning shifts with each new context and interpretation, the symbol itself remains fundamentally intact. This was subtly communicated in the very nature of the original OHO happening: with the figures of the artists transmogrified by the drapery into the static shape of the mountain, they personified something of Triglav’s literal weight. But it also held true across all three performances: as much as the artists literally inhabited the symbol, the symbol also inhabited the artists. ‘Triglav’ presented a repeated attempt, across three artistic generations, at undermining a single stratified emblem. It also revealed the possibility that the simple task of subversion was never at the core of OHO’s original performance, but rather the proving of a national symbol’s robustness, in different hands and through different times.