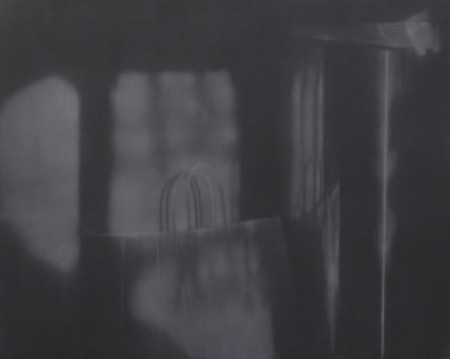 It never occurred to me that Troy Brauntuch was one of the funny siblings of the Pictures Generation, but after visiting his latest show at Friedrich Petzel, a sprawling exhibition of drawings, paintings, letters, photographs and source material pulled from his more than 30-year career, I’ve come to see that a great wit was always there, and it has only sharpened with age.

Brauntuch’s humour is neither the Borscht Belt stand-up of Richard Prince’s ‘Jokes’ (1985–ongoing) nor the caustic satire of Cindy Sherman’s ‘Untitled Film Stills’ (1977–80). Instead it involves a tactical inanity brought to bear with unflinching and sometimes awkward determination. Letter (1980) is a short, framed missive from the gallerist Annina Nosei that reads: ‘Enclosed is a check for the drawing of the soldiers sold to Martha White, who is a nice collector of Minimal art in Kentucky.’ The text documents pairs of relationships, art works and payments, while providing almost no descriptive information. The type floats high on the page, resting awkwardly in the frame. It is insistently full, but startlingly empty − as comically baggy as a pair of clown’s trousers.

With Mickey (1985) and Mickey (2000), Brauntuch offers a joke about time. The former is a c-type print of actor Mickey Rourke: young, topless, smiling cheekily and bathed in sunlight. The latter is an ink-on-paper depiction of the artist’s black cat. Between the two lie a few feet of wall space and 15 years. Bridging them is a famous mouse’s name and an unspoken punch line to an unelaborated bit – I imagine it’s one about aging, though Brauntuch doesn’t let on. His gags are like good puns in that way. They rely heavily on someone else to connect the dots, but, where wordplay uses sounds and meanings that can be predictably mapped through homonymic associations, Brauntuch’s images give just enough to go with and then get out of the way.

This same methodology drives his thematically heavier work, which was well represented in this exhibition. Newsprint pictures of O.J. Simpson’s notorious white Ford Bronco, the crumpled cockpit of Pan Am Flight 103 and a bullet-riddled door from the 1993 Long Island Railroad shoot-out rely on the stark difference between the historical shadows of those events and their images’ representational efficacy. It’s an imbalancing act that Brauntuch has mastered.

His new pieces, a series of more personal, nearly monochrome conté crayon-on-cotton drawings that ostensibly catalyzed this expansive exhibition, are also able to offer weirdly disparate narratives (‘Bag with Garbage’, 2009). In three separate works, Brauntuch depicts a large paper sack set by a curbside. In each, the bag is splashed in epic light and rendered in monumental detail, but it remains unquestionably cast off. The image is incongruous and so too are the stories that surround it. The bag is just as likely to be filled with wrapping paper as it is with some forgotten gem. Is this a story about the everyday or a once-in-a-lifetime opportunity? In these later pieces, Brauntuch moves past straight tragedy or clean comedy to find a space where either can exist. Perhaps not knowing which makes for the funniest joke, or greatest misfortune, of all. It is certainly the most true to life.

Graham T. Beck is a writer and critic based in New York, USA.