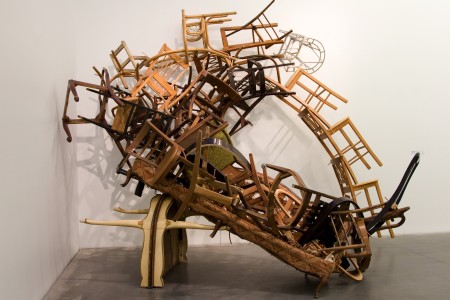 The New Museum’s new home occupies a narrow plot on the still gritty but rapidly gentrifying Bowery, wedged between two restaurant supply stores that probably won’t be there next year. The building – designed by the Japanese firm SANAA – is an appealingly straightforward construction: an uneven stack of box-like floors covered with translucent aluminium mesh that somehow conveys both elegance and toughness. The day before the space opened, a glowing review by the architecture critic Nicolai Ouroussoff appeared in The New York Times, one of many raves the building has garnered. The curious thing about this article was the photograph featured below the headline: in it the building itself was nowhere to be seen. Taken from inside the museum’s lobby, it showed a crowd of people peering in. Behind them, in the background, was a view of the street – low-slung tenement buildings, vestiges of the old flophouses that once populated the neighbourhood. Filter out the bright red tour bus, and it could have been a shot of New York in the long-gone great bad old days – the New York of 1977, say, when the New Museum was founded.

Whether deliberate or not, this nostalgic jolt fitted in perfectly with the carefully stage-managed discourse around the museum’s reopening. The New Museum wants you to know that it is still connected to ‘the street’ and to its own history, as a risk-taking alternative to the more properly institutional institutions uptown. This attitude extended to the inaugural exhibition, a celebration of the modest and unpolished. Organized by the museum’s new all-star curatorial team – Richard Flood, Massimiliano Gioni and Laura Hoptman – ‘Unmonumental’ was a Zeitgeist-y show of ‘debased, precarious, and trembling forms’. Conceived in four parts, with staggered openings (starting with sculpture, subsequently filling the previously empty walls with collage, then adding sound installations and an online component), it was designed to mimic the agglutinative nature of the works presented. Perhaps the most remarkable thing about it was how neatly all the resonances lined up, how resolutely ‘on-message’ the whole event seemed.

As it played out inside the gallery, this sharp focus revealed a certain wearying uniformity: the 30-artist show first registered as a jumble of jumbles, part construction site, part grade-school arts-and-crafts workshop. There was a surfeit of rough, blobby surfaces, cheap building materials, slapdash paint jobs and sad thrift-store detritus. Nothing fought too hard against gravity; forms sagged, dangled, leaned. Certain materials seemed particularly popular: plywood, cardboard, rope, string, artificial flowers, old books, old clothes, old furniture. A table-top of small-scale constructions by John Bock – cobbled together from food packaging and magazine scraps – could have been a model of the exhibition in miniature. The lumpy forms of Rebecca Warren’s unfired clay sculptures and the dripping wax of Urs Fischer’s woman-shaped candle seemed to be hooked up to the same tap of ooze.

Canny curatorial choices played up the various visual rhymes and formal homologies between works, but they were more powerfully connected by a particular tone: a shared language of refusal. Industrial fabrication, precious materials, the well-made object – all these were obviously jettisoned. But so too were inherited signifiers of anti-aesthetic value. That is to say, there was no ‘specialness’ conferred by the use of vernacular material: the bits of pop-cultural detritus weren’t glorified as ‘ready-mades’, the adoption of borrowed images didn’t feel like ‘appropriation’. For the artists in the show all this was business as usual, a simple matter of using all the crap that’s around.

Actually, maybe ‘refusal’ isn’t the right word for the stance suggested by these works – it implies too vigorous a gesture. Rather, the negation took the form of a gently raised eyebrow, often cast in the direction of radicalisms, aesthetic and social, of the past. There was much art-historical Dumpster-diving in evidence, from Carol Bove’s stylish displays anatomizing the sexual politics of domestic Modernism to Gedi Sibony’s almost invisible replay of Minimalist tropes via leftover building materials. The idea of ‘politically engaged art’ (a staple of New Museum exhibitions) itself seemed a little worn out and second-hand. Lara Schnitger’s torqued tent-like assemblage was constructed from the most banal ‘message’ T-shirts imaginable: ‘If you want to wear fur stop shaving’ and ‘Mean people suck’.

Perhaps the best motto for the whole show could be found in the title of one of Rachel Harrison’s sculptures from 2006 – an hysterically Absurdist construction cobbled together from a wig mannequin, a clumsy plaster plinth, a bunch of plastic potatoes and a toy video camera: it was called This is Not an Artwork. There is a sense that the New Museum is adopting a similar winking, referential, faux denial: the message ‘This is not a museum’ seems to hover behind their recent moves. Whatever else ‘Unmonumental’ was, it was a canny exercise in marketing, an advertisement for the spirit of the organization. However much one wants to believe in that spirit, it is slightly alarming how slickly they are promoting their unslickness.