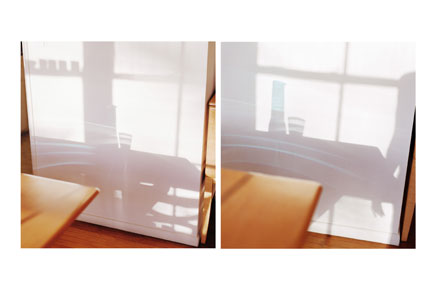 Uta Barth’s latest series of photographs, ‘Sundial’ (2007), describes the effects of light as it shines into her home at different times of the day and at different times of the year. Many of the images are cool and replenishing scenes of sunny clarity, and, arriving somewhat harried at the gallery to see them, I wondered whether anyone, nowadays, can have the time to enjoy such moments of placid repose. Others in the series, however, are kinked to evoke the progress of obscure, searing psycho-dramas, as though storm clouds of bad karma were passing through the living-room, and these, I suppose, provide part of the answer: while we all may be able to spare at least a few moments, we can never sufficiently put aside our cares really to wallow in that tranquillity.

‘Sundial’ evolves rather like a fugue in eight parts. It opens, grandly, with Untitled (07.01), which comprises three large photographs entirely occluded by light that has poured through windows so profusely that it seems to have grown dense and milky. The suite then continues in short sequences of smaller panels, each staging moments of peace and moments of haunting. Untitled (07.13) consists of two panels: the first pictures the shadow cast on a white wall by a vase of flowers; the second reproduces the same scene, more or less, except that the wall has turned dark, as though Barth has transposed onto it a portion of the negative. (In fact, although Barth takes all of her pictures with a traditional film camera, she digitizes her images and carries out all her manipulations on a computer, so that simple technical operation is not the key to the darker pictures.)

Barth took many of these photographs at dusk, when the ambient light was dimming in her rooms but the sun was sinking in the sky to blaze lurid pools across her walls. One suspects that all this unsettling colour and movement provided her inspiration. For in the first of the four-panel sequence Untitled (07.6) we are introduced to a block of light which is shifting across a wall like a boat at sea; then, in two subsequent frames, the images are manipulated to turn the boat into a miserably dark ship of lost souls. Barth isn’t always maudlin – sometimes, as in Untitled (07.5), she fixes on the suggestive oval of a lampshade to introduce an almost comic, sci-fi accent, as though we were chance witnesses to a UFO flying over a sofa. But in the five-panel sequence Untitled (07.2) she turns grim Cassandra once more, envisioning a horrifying cloud of mustardy yellow hovering in the air near a window before moving her camera off to the side to suggest some rapid flight to safety.

Alfred Stieglitz is often name-checked in appreciations of Uta Barth, and ‘Sundial’ makes one understand why this is so. The great American Modernist photographer would certainly have appreciated the atmospheric styling, abstraction and technical agility of these pictures, for throughout Barth marshals the light and the simple surroundings with a restrained but expressive grace that complicates the sense of planes and describes forms and shadows that often seem conceived to spread themselves across the entire sequence of pictures. In regard to ‘Sundial’, at least, Stieglitz seems an appropriate parallel in another respect, for Barth’s pictures also aspire to a kind of universalism: they give not the slightest hint of what might be intended by those poisonous presences, those dark imaginings and gaseous hauntings, and this makes them very accommodating to our own private ogres. And as critics of Stieglitz have acknowledged, the old man’s universalism was of a certain narrow and genteel kind, and which could also be said of Barth’s scenes. After all, her ogres may well pound with a fearful thumping, but they pound through her living-room, and this makes them poignant rather than truly nerve-jangling. Essentially, ‘Sundial’ saw Barth in Matissean mode, smoothing away the day’s cares. For those still hurtling along on the underground when the last of the evening light is falling, Barth is there with her camera; and for those who land home with a migraine and can do nothing but fall into a chair and close their eyes, she’s there too.