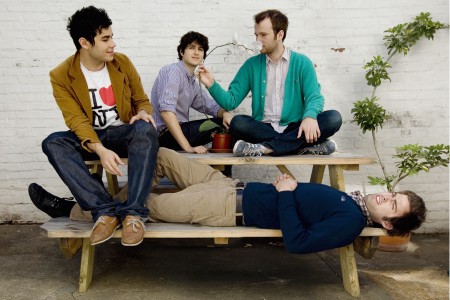 When four white, middle-class graduates of Columbia University – clad in polo shirts, V-necks, khaki pants and deck shoes – show an interest in African juju and highlife music, they need to be aware of the complications and pitfalls in appropriations of any kind. A ‘natural’ appropriation is, of course, an impossibility: cultural aping is to be avoided. Vampire Weekend seem well aware of this; they make it the subject of their best-known and most ‘African’ song, ‘Cape Cod Kwassa Kwassa’ (2007), which incorporates the line: ‘But this feels so unnatural, Peter Gabriel too.’ The name of the one-time Genesis singer – initiator of projects such as the World of Music, Arts and Dance (WOMAD) festival series – is a stand-in for that other ‘world music’ variety which is as popular as it is paternalistic. In contrast, in ‘Cape Cod Kwassa Kwassa’, they rhyme brand names like ‘Louis Vuitton’ and ‘Benetton’ – insignia of their second nature, as demonstrated by their sense of style – with ‘reggaetón’, the strand of Latin Caribbean music widely praised for its ‘naturalness’.

The clash of cultures is present from the very song title: Kwassa Kwassa is a popular 1980s dance rhythm from the Congo, and today a synonym for soukous music; Cape Cod is one of the priciest holiday spots on the American East Coast. And what’s the musical result when these worlds collide? An enlightened, post-colonial update of, well, Paul Simon, the East Coast intellectual who had the first ‘world music’ bestseller with his album Graceland in 1986. His fans celebrated an opening of new horizons and a successful culture transfer. Critics spoke of cultural imperialism. Vampire Weekend out themselves as Graceland fans. This could also be read – as can their preppy look – as a political style game, a calculated breach of established hipster codes. After all, in left-field pop circles Simon is usually not considered any cooler than Gabriel, Bono, Bob Geldof or Sting (the Vampire Weekend sound is also reminiscent at times of Sting’s band The Police).

The fact that breaching hipster codes has long been part of the code itself hasn’t escaped Vampire Weekend’s notice either, and they limit their Gracelandification to that one song. Otherwise they practice the kind of style-hopping that is increasingly prevalent amongst iPod- and MySpace-era musicians; Yeasayer and Dirty Projectors, two other bands from New York City often mentioned in the same breath as Vampire Weekend, equally seem to draw on the ghost of ‘world music’ amongst many influences. Their eclecticism is on the brink between strategic and organic, drawing on music from the vast range of genres and epochs readily accessible on the Internet. Seen in a culturally pessimistic light, one could bemoan the loss of contexts and historical implications, with, for example, hints of Simon, Roxy Music, Fischer Z and The Fire Engines all appearing in a single Vampire Weekend song. The sound of Attention Deficit Hyperactivity Disorder? Crazy rhythms in any case.

Crazy Rhythms was the title of The Feelies’ first album in 1980. The cover shows four nerdy young men against a sky-blue background. They, too, are sporting the preppy look; drummer Anton Fier’s shirt is emblazoned with a Ralph Lauren polo-player logo – a no-go in post-punk circles of the time. The first song on Crazy Rhythms is a signature tune of ‘Cape Cod Kwassa Kwassa’ calibre: with their African timbales and Cuban claves, The Feelies produced an early version of preppy ‘world music’. The title of the song exactly mirrors how it sounds: ‘The Boy with the Perpetual Nervousness’. ADHD avant la lettre.

Klaus Walter is a writer living in Frankfurt am Main. He works for various radio stations, including www.Byte.fm