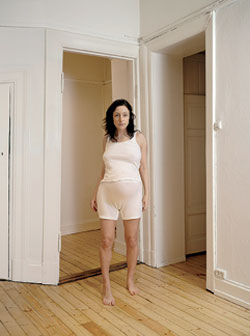 The most fascinating physical change in a pregnant woman may be not her glowing skin or even her swollen stomach but the way her navel transforms into a totally alien thing, like a button pushed out from the inside or a stone dropped in the middle of a shallow pool. It’s the first thing I noticed in Vibeke Tandberg’s series of self-portraits taken during her pregnancy, ‘Undo’ (2003): that strange protruding navel revealed between the furled edges of her white cotton camisole and the stretched-out waistband of her underwear. All the veins are right there on the surface, under unbearable pressure, lending the belly button a weirdly animated quality. But this is part of Tandberg’s objective, to portray pregnancy as it feels in the midst of it – not as a miraculous natural occurrence but as an unfamiliar and even alienating physical condition.
In this series of seven self-portraits Tandberg pictures herself standing in the corridor of a bare apartment. She seems to have emerged from one of the passages behind her to be caught in the harsh light that drenches the space. Her face is sallow and waxy, and her distant, deadened stare suggests blinking would be a chore. Protruding from beneath her clothing, her swollen belly is like an unwelcome and stubbornly shifting mass that her position must constantly accommodate. In one image she unsuccessfully tries to stand in relaxed contrapposto. In another she twists around to face us, but her belly refuses to come along. Could she be trying to imitate the poses of Classical sculptures? With such an obvious impediment, that strikes me as a funny thing to do. But humour arises hesitatingly in this series, if at all.
Although digitally-manipulated self-portraits are well rehearsed in recent photography, it is easier to compare this series with works in other media. Tandberg looks more like a moulded Charles Ray sculpture than a Rineke Dijkstra model: she strives to look lifelike but falls short. At times her attenuated limbs are reminiscent of a Botticelli figure, or her expression resembles that of the subject of an unflattering official portrait. She uses digital technology to cast herself and her surroundings as an artist’s rendering rather than the object of the camera’s lens.
Tandberg’s manipulation of these images is so subtle that it is difficult to pinpoint what has been altered, raising doubts about the authenticity and stability of every detail. Could her pregnant stomach be another trick rendered in Photoshop? In past series she has morphed her features with those of friends or family members, confusing identities to discomforting effect. The artist has worn her dad’s baggy clothes and taken on the features of her best friend. These works hint at serious Oedipal and narcissistic issues, but they also hide a dark humour. This time Tandberg trades on the unique natural distortion of her body to confuse real and virtual morphology thoroughly, casting doubt on both. Simultaneously she suggests that the most authentic way to portray the physical and emotional realities of her pregnancy is with a skilfully mutated image.
Tandberg uses a different strategy in ‘Old Man Walking Up and Down a Staircase’ (2003), a video and photographic series in which an elderly man struggles to negotiate the stairs of his apartment building, while his clothing is constantly displaced by his bulging beer belly. When he confronts the camera with a defiant smirk, his spongy wrinkles reveal that Tandberg has disguised herself with stage make-up, while concealing her pregnancy under the oversized suit. But we are more attuned to the effects her disguise can’t achieve; she becomes a player, her suit a costume and her pregnancy just a prop.
In Hollywood films the mockery of pregnancy is a recycled gag, but in the art world it still seems like a radical gesture; at least, it’s not what we would expect from one of the apparent heiresses of the legacies of feminist artists such as Cindy Sherman or Mary Kelly. Subverting the authenticity of her own pregnancy seems beyond the pale. What should we make of her self-portrayal not as an anxiously expectant mother but as a lonely woman whose body is peculiar and unfamiliar to her? Tandberg’s subtle visual trickery and comical sight gags provoke a smile, but her deadpan presentation of a personally revealing subject matter goes beyond the merely amusing.