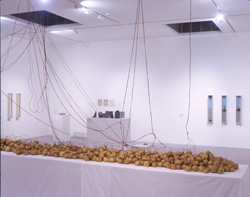 Alternative energy is not without its cranky, pseudo-scientific associations, and sources of natural power are often criticized for being impractical and aesthetically displeasing. No survey of Victor Grippo’s work could neglect the artist’s experiments using the energy latent in organic matter, and Camden Arts Centre’s overview of his work has all the positive ideological feel of the golden days of the 1970s, when experimental art, radical politics and social projects shared some aesthetic characteristics.

Grippo initially trained as a chemist, and a good deal of emphasis has been placed on his metamorphosis from chemist to artist. Perhaps expecting to discover esoteric scientific paraphernalia, I was surprised by how simplistic the chemical experiments on display appeared, and I struggled at first to give due critical attention to set-ups that seemed no more complex than school science experiments. On discovering the installation The Artists’ Meal (Broad Door Narrow Table) (1991), it became apparent how little the equipment I had envisaged would be of concern to the artist. Comprising a free-standing set of doors that lead to a bench top displaying an array of organic and culinary artefacts, it includes pieces of corn that have undergone the effects of heat. Presenting the simple transformation from hardened corn to fluffy popcorn, the piece quietly but effectively addresses the sculptural possibilities of natural phenomena acting on commonplace organic matter.

Playing with the theatrical attributes of the white cube, the largest gallery was transformed into a sort of laboratory-cum-workshop. Stationed amid an array of technical drawings and wall-based sculptural pieces that toyed with the physical principles of balance and motion were Grippo’s best-known works, harnessing the electrical potential of potatoes. As is common know-ledge, a potato can conduct a small amount of electrical power, and, providing that zinc and copper electrodes are introduced, it can function as a rudimentary battery. So too can other fruit and vegetables, but Grippo’s choice of the humble potato is based on the concept that it is an emblematic food of the poor and thus holds latent social and political implications.

A modest-sized plinth covered with a Perspex shell contained four spuds wired up to power a digital clock. Made, surprisingly, 20 years after more ambitious pieces with potatoes, Time (1991) reconstructs the potato-battery model at its most basic level, but with the addition of a text from Fyodor Dostoevsky’s 1872 novel The Devils presented in Russian with a Spanish translation. This inclusion of a literary text written in different languages suggests an analogy of transference (or possession – the novel is also known as The Possessed) and interpretation in relation to linguistic translation.

Analogy 1, Second Version, or Energy (1977) and Naturalizar al hombre, humanizar a la naturaleza o Energía vegetal (Human Naturalization, Natural Humanization or Vegetal Energy, 1977/2004) stood side by side, both comprising a table covered with pristine white linen that gave them the reverential appearance of elongated altars on which lay scores of grubby, sprouting potatoes. Elevating the status of the humble vegetable to religious levels, Analogy 1, Second Version, or Energy includes a DC meter contained in a small box, allowing viewers to read the exact measurement of electrical charge produced by potatoes connected en masse to a tangle of wires suspended over the table. Taking a reading myself, I found the resulting data relatively unedifying. Although there is undoubtedly an austere beauty in presenting dormant energy that is neither used nor wasted, allowing for a meter reading means reifying what might just be left to the imagination and thus could be seen as working against the artistic or political potential of the piece.

Another defining element of Grippo’s practice is his engagement with craft and the accomplishments of humble labourers. Discarded detritus of traditional trades littered the exhibition space, including a wheelbarrow, a half-finished brick structure and various farming implements that formed part of a work simply titled Some Trades (1976). Elsewhere, a carpenters’ table covered in wood shavings complete with hammer and nails stood hermetically sealed in a Perspex box (Carpenters’ Little Table (with Unfinished Letter) (2001). It would be easy to suspect a sentimentalizing of proletariat work, but that would miss the mark; here is an intellectual premise that physical work cannot act without the mental, and a gesture that aims to reduce the gulf between artist and craftsman. A further darkened space housed an installation of three rows of old wooden school tables, over which hung dimly lit bulbs, producing just enough light to read the handwritten texts scrawl-ed across them. Tables of Work and Reflection (1978–94) seems to be slightly too conscious of its ‘poetic’ appeal, and with words such as ‘poetica’ visibly prominent, it would be difficult to defend the work against accusations that it is a mere exercise in nostalgia.

What a visitor might easily have missed in this show were examples of two paintings reflecting Grippo’s early fascination with electrical energy. Painted in 1966, these untitled canvases are colourful renditions of electrical circuit boards that fall somewhere between figuration and abstraction, and show the artist at his best – engaging with the world of ideas while remaining this side of the materialists’ fence.