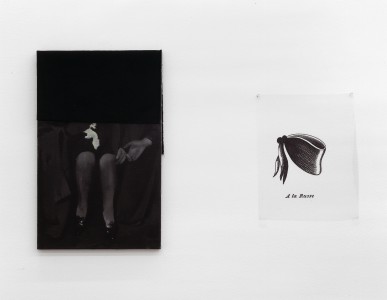 In an essay presented to the 16th Congress of the International Psychoanalytical Association in 1949 the French psychoanalyst Jacques Lacan located the formation of the self in the mirror reflection. Identity, as Lacan understood it, arose in the recognition of the image as oneself. For the most part the representation in art of the human form has followed the same model: by playing the role of the mirror, the art work re-enacts the moment of recognition in an exchange that ultimately reassures the viewer.

For his first solo exhibition in the USA, titled ‘Black Hearts Always Bleed Red’, Romanian artist Victor Man turned identification against itself through a series of representations marked by refusal. Refusal plays a fundamental role in Man’s work: of narrative, in his decontextualized images, and of finish, in the sparseness and, often, diminutive scale of his installations. Here it also served as a refusal of the viewer. ‘Black Hearts …’ comprised six installations made up primarily of paintings and acetate prints, in atmospheric greys, along with two wall illustrations, one single canvas and a large sheet of black glass printed with black images and propped against a wall. The individual pieces hovered on the walls like the relics of secret societies, dislocated and adrift in the gallery’s white expanses and impervious to the viewer’s gaze. In other words, Man’s images are not without a story, but neither are they revealing it. Most are appropriated from media sources, chosen – according to the press release – to ‘provoke the viewer to seek their own recognition’ and for their potential to inflect one another – a strategy that sunders any prior narratives that may linger with the individual image.

The exhibition opened with a small silhouette wall drawing of an old maid carrying a caged rat (Untitled, 2008). The ghostliness of the tiny, translucent grey figure, hunched in the centre of an otherwise empty wall, was a suitably equivocal entrance to an aesthetic weighted heavily with suggestion. Adjacent to it, Untitled (Minded Subsequent Practices) (2007) juxtaposed three photographs on acetate – a 1940s’ or ’50s’ scene of white male bonding, a pin-up shot of actress Jessica Alba, and a film noir image of shadows across a grave – with a murky two-panel painting. Alongside the pieces, a piratical Jolly Roger hung from a nail, with the skull and crossbones just visible. The image of Alba is perhaps the most accessible point in the piece, but just as it promises a dialogue, its voice is foreclosed on by its association with the other images – in particular, the flag – and a scratched surface in place of a smile.

The dichotomy between the image and its disfigurement points to another dichotomy, visually reiterated in the exhibition’s light/dark palette, of symbolic surfaces and depths. The undercurrents of violence and sexuality are palpable in Untitled (Minded Subsequent Practices), particularly in the context of Los Angeles. Yet Man evades any conclusions, or human connections, by effacing the humanness of the imagery – by averting the gaze. The effect was furthered in a painting of a seated woman. Part of a two-piece installation (Untitled, 2007), the top half is covered by a black cloth, with only bare calves, smart shoes and touching male and female hands visible. As the painting reified the exhibition’s repressive tone, it reminded that the language of secrets exists as an absence – once a secret is spoken, it ceases to be.

Man’s painting style is soft and subtle; it evokes the similarly dreamlike images of Luc Tuymans. For both artists, thin muted layers of paint graze the material of the canvas so that the subject remains embedded in its own ethereal surface. However, Man’s work denies the definition that positions Tuymans’ subjects within a greater historical narrative. Instead, he strikes at precisely the point at which meaning begins to coalesce. Untitled (2008), a charcoal wall drawing accompanied by a small painting of wolves in a wintry landscape, was easily the exhibition’s most provocative work. The drawing depicts a herd of animals devouring a supine woman with a horse’s head. The image is simultaneously brutally visceral and barely there; its join-the-dots line-work vanishes from a distance. Fragmented and fleeting, it returns only an absence to the viewer, an assurance that the reflection is just another surface after all.