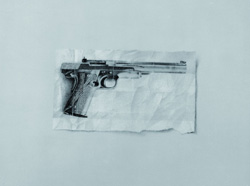 Vermeer had disappeared for two centuries before making his comeback. Yet Rembrandt, Raphael and Rubens have been charting longer than Pink Floyd’s Dark Side of the Moon (1973). So a question arises: which works of our times will people be looking at 300 years hence? In a retrospective of drawings by the artist Vija Celmins, representing four decades of solid and steady work, there are plenty of images that shoud make the cut – glimpses of the world around us, pain-stakingly and lovingly coaxed into being through the humblest of means: pencil and paper. Although Celmins has ventured into trompe-l’oeil drawings of images ripped out of books – guns, atomic blasts and their effects – and captured not only the image but also the creases and tattered edges of the paper, her greatest output has been in depicting the three elements: land, sea and air. These are not landscapes, sky- or seascapes in the traditional sense; as Celmins removes the horizon line (or simply hints at one) and plunges us head-first into these spaces, allowing our eyes to run unfettered over their surfaces with no one single detail taking precedence over another. These partial views suggest a much bigger ‘whole’, by seeing not the world in a grain of sand but an ocean in the span of a few yards of water.

It is in her works focusing on the sea that Celmins stretches out and captures the magnitude of the subject. These drawings have the look of photography, but there is something organic about them – as if the collection of eddies and peaks in Untitled (Big Sea #1) (1969) were built by Celmins grafting one wave on another, light versus shadow, until it extends across the page. Neptune would be pleased with these portraits of silvery expanses, which do not mimic water so much as induce a feeling of aquatic hypnosis: the lull of the lull. The desert drawings, such as Untitled (Large Desert) (1974–5), don’t soothe the eyes: up close they are too busy, with too many rocks that look cartoonish. Back away a few paces, and the work coalesces into a firmament unlike any we have seen, one devoid of liquid or life, like close-ups of the crater-filled Martian and lunar landscapes she depicted from satellite photographs.

Images from space abound in Celmins’ drawings: mists of nebulae and wispy arms of galactic neighbours, as in the ‘Untitled (Coma Bernices)’ series (1974–5), comets spraying across star-filled voids or sometimes just the innumerable dots of ancient light that have found their way here. These drawings do everything except twinkle.

The amazement comes not only from what is drawn but also from what is not drawn. There may be erasure here and there, but these stars evolve from the space around them, as Celmins has carefully revealed balls of flames in the cosmos one at a time, until her enchanting nocturnal heavens are filled. These works also see her shift from working in graphite to working in charcoal, with the result that some drawings are less effective than their previous graphite counterparts, by being too grainy or showing the tooth of the paper, which undermines their visual sleight of hand; however, when charcoal is piled on, as in Untitled #14 (1998), the effect is amazing; the inky black of space swallowing starlight in a velvety embrace.

Continuing to work in charcoal, Celmins trained her gaze from these grand subjects onto the small and fragile: cobwebs. These works show the lessons learnt from drawing galaxies with delicate lines stretched taut over dark expanses. They refer as much to the wonder of the natural world as to the slightly Gothic, conjuring up empty dust-moted rooms and eerie tales. In Web #10 (2004) we get something a little different. Zooming in on a web, Celmins finds a hidden geometry that could be the spinnings of a talented arachnid or just the artist taking liberties. The result looks like a curious grid, made using algorithms and slide rules, and it indicates more good drawings to come.

Celmins draws what she sees, plain and simple, and in so doing has made works that are neither plain nor simple. These vistas onto the natural world continue to fascinate. The magic of light on surface and that curious alchemy that can be achieved with the deftness of touch, restraint and the patience to follow through to a very beautiful end.