BY David Lillington in Interviews | 01 MAY 90 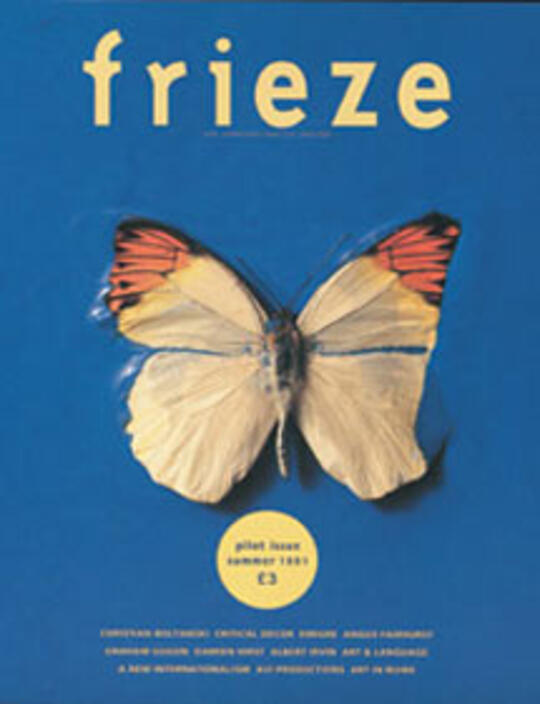 D
BY David Lillington in Interviews | 01 MAY 90

The brushes lie, three deep, along eight foot of wooden bench. They are clean. The floor, on the other hand, is encrusted with slashes and dribbles of saturated colour. The empty paint cans are spread to form a platform on to which Irvin can lay any canvas he is working on. He prefers not to put a painting directly on to the floor.

'I like to get the air under it,' he explains, in a moment uncharacteristically enigmatic. And then, in an attempt to clarify: 'It's quite a big undertaking just to get round the bloody thing. Painting like this is physically demanding.' It must be. Albion, for example, is 8' x 14', and even the more typical Samson, 7' x 10'. Paintings of the late '80s tended to be smaller: Tritonville, of 1988, is a mere 5' x 6'. But its largest brushstrokes cross its entire length and breadth and are, as Irvin puts it, 'entirely freely applied'.

'I was going to do – and it hasn't come to anything – an underground station in Newcastle, an enormous thing – which I would have enjoyed. This project captures nicely the essence of Irvin. The excitement about exhibiting in a tube station is indicative, perhaps, of socialist attitudes; the monumental size of the projected paintings is symbolic of his ultimate concern: that most unfashionable of concepts, the sublime.

His spiritual godfathers are the American 50s abstractionists although his god, he claims, ('my home-bred god') is Turner, painter of the sublime, whose later paintings William Hazlitt described as 'pictures of nothing and very like.' One wonders what Hazlitt would make of those masters of the modern sublime, the American abstract painters of the 50s. What might he say of Rothko's 'Buddhist television screens'? Barnett Newman's flat paintings with their 'zips'? Ad Reinhardt's 'Black Paintings'? In the 90s Hazlitt would feel more at home, for the credibility of such painters is in question. Anyone who professes to trade in the sublime these days takes a risk. No sooner have you said, 'My search is for the unanalysable,' as Irvin did in the 70s, than you run the risk of making a fool of yourself. The sublime is out of fashion, and the body in which the sublime once lived, grand abstraction, is often said to be ill to the point of death. 'One of the reasons for them being abstract', Irvin says, 'whatever that is – is that I want them to be unspecific, to be comprehensive. They're offered to you to relate to your own nerve endings.'

Well, what are they like then? Generally speaking, an Irvin consists of a background field of thinned acrylic crossed by bars and slashes of other colours, themselves crossed or overlaid with further brilliant slashes, the whole punctuated or edged with more self-contained shapes: enclosed ovals, chevrons, crosses, clustered lines. This abstract landscape is liquid; the colours tend towards translucence; absolute opacity is the exception. As the layers build up, so does the depth of field. The biggest shapes leaves the canvas – or perhaps come down to it, so that the effect is of experiencing one corner of something vast. The paintings are lit with a fierce internal luminosity, and the brilliance of colour can be such as to hurt the eye. The paint loaded brushstrokes are wholehearted, the liquid quality of the paint gloried in which such sensuousness that Irvin cannot be surprised that some have jumped to glib interpretations.

I give talks occasionally round the art schools, and several people have said to me , 'it's just sex, isn't it?' 'But', he explains, 'the kind of thing that rings true for me is Jackson Pollock's statement that, 'painting, for me, is energy made visible.' One of the magical aspects of painting is that you set off with a brush-load of paint on a journey across the canvas, exploring a space that you're creating while you're exploring it. Is it all blindly inspired then? The work of the abstractionists' muse, whoever she may be? Random? Does he ever have doubts about what he is doing?

'Whatever way you're painting, you can't help having misgivings about whether you might be doing it right or wrong. Of course no one's doing it right or wrong in a way: Bomberg used to say, 'always remember that in art the reverse is also true', and I agree with that. I used to be a figurative painter. When I was a student I copied Rembrandt in the National Gallery. Any position that anyone takes up is hard won, unless you're a straw in the wind. You've got to narrow down the cutting edge.'

The decisive year for Irvin was 1956. In that year the Americans came to London: Pollock, Rothko, de Kooning, Kline, Newman, Louis and nearly all the most famous abstractionists. The twin shows at the Tate sent an electric shock through the British art world. 'You can imagine the impact of seeing Pollock, de Kooning and Kline and the rest of them – just suddenly walking into the Tate and seeing them all at once' – Irvin strikes his hands together with a loud clap – BANG! like that.

'I wonder where a comparable impact has come from for a subsequent generation. I think for them it's been more conceptual. There's some danger that they might have been convinced by the word rather than by the visual impact of paintings.' Does he feel out of place in the world of Postmodernism, in which Abstract Expressionism, or that flower by any other name, is disreputable?

I don't see any reason to shift my ground just in order to be fashionable. A couple of years ago I had a show in Sydney, and one in New York. And generally speaking young people, and young artists, do seem to respond to it. It doesn't matter what they're painting themselves. I often wonder what the hell I'm able to communicate, but I'm aware – and I can tell from what people say to me – that there is in the paintings a life force, a zest, a lust for life. I don't kid myself that they knew who the hell I was in New York. And I had no idea what the flavour-of-the month reaction to it would be, or whether I'd come back with a flea in my ear. But it went very well indeed.' The most frequent compliment paid the paintings is that they are beautiful. Is Irvin flattered?

'It depends what you mean by beauty. It's got to have something disturbing about it.' Francis Bacon, he comments, once insisted that paint used in this way makes a direct attack on the nervous system.' 'In the kind of painting I'm doing the marks are revelatory. I couldn't do it without brushing the stuff on explicitly myself. It's almost like despoiling the thing: "this is my mark, I made it!" It's like a diary. "So what were you doing at half-past ten?" – "I was doing that".' He ghosts a gesture over a cross-shaped mark on the painting beside us. 'And then at a quarter past twelve?' – 'Well, I was down here doing that.' And I would make the claim that anyone who looks at it would feel the impact of this... presence ... revealed through the activity of the marks.'

The 'first generation' of American painters – which includes Pollock, de Kooning, Kline and Motherwell but not 'pourers' such as Morris Louis and Helen Frankenthaler – confirmed him in a search that looked right back into the nineteenth century. 'The impact that came from that first generation somehow confirmed the possibility of what I thought Turner was. I couldn't see how to do it, I couldn't see how to bring it into this century.' In spite of affinities he feels for Picasso and particularly for Matisse, these artists failed to give the leads he sought. His desire, stirred by Turner, was for the sublime. It is a notion which is as necessary as it is problematic. If it didn't exist, artists would invent it. It goes in and out of vogue, expressions of it are continually being debunked, but it remains, an invisible angel, whispering in artists' ears the words mystery, beauty.

The last thing one would accuse Irvin of is being mysterious. He himself is a natural debunker; both his feet are planted firmly on that paint-bespattered floor. I return to the question of the self-doubt of the grand abstractionist.

'I just stand in front of them and try to think how I can make them better. What the hell's better? I don't know. Whichever way you're painting, if you really are taking it to its inevitability – if your integrity's intact over what you're doing, it does mean that there are all sorts of things that you aren't able to do, and you might regret this. You might wonder whether you shouldn't have done something else. But anybody who ever believed in anything has always done that.'