This visual essay is the continuation of a collaboration with the Turin-based painter Giorgio Griffa, which began last year following the discovery of a very particular brush at an urushi [lacquer] workshop in Wajima, Japan. Only 5 cm wide with a flat wooden handle, the brush is employed to apply the critical final coat of lacquer to tableware and furniture in this painstaking, and seemingly anachronistic, process, which dates back to the prehistoric Jomon period (14,000–1,000 BCE). Crucially, its bristles are made from the hair of Japanese women pearl divers or ama. I purchased one of these highly evocative objects with the intention of using it in an artwork yet, for some time, I was daunted by the idea of making marks with it. In May last year, however, I found myself sitting with Giorgio at a dinner to celebrate his participation in the Venice Biennale and realized there and then that I should ask him to collaborate on the work. There seemed to be something in the nature of the brush that aligned with his measured yet exuberant (and often calligraphic) mark-making. His generous response consisted of three cypher-like, ink-on-paper works organized within a grid of folds that led, in turn, to a series of similarly gridded annotations on my part – annotations which reconnected that very particular tool to its origins.

When I arrived with my 8 x 10-inch plate camera to photograph Giorgio’s studio in late December last year, I found a small trestle table in the middle of the main space with a pile of neatly folded canvases sitting on top. (The artist has used exclusively unstretched, unprimed pieces of canvas, burlap and linen as supports for his paintings since the mid-1970s.) This modest stack – no higher than 30 cm – would comprise, I was told, the entirety of his forthcoming solo exhibition at Camden Arts Centre, London. In folded form, the paintings asserted a quiet materiality; the textiles – in a range of white, cream and brown hues – often frayed at the edges. Even when hung, simply with pins along the top edge, the works retain a sense of being objects that exist resolutely in time and space. Seeing this little stack of paintings and, later, the studio’s remarkable archive – which houses much of the artist’s output from the last 40 years or more – in geological strata-like piles, I realized that I’d brought the right tool to photograph the space. The slowness (exposures can last many minutes), insistent materiality and process-oriented nature of large-format, silver-based photography rhymed with Giorgio’s practice in ways that I hadn’t fully anticipated: even the camera’s gridded, ground-glass focus screen seemed to echo his paintings’ structuring folds. The resulting images are, I hope, a celebration of the lean economy and subtle materiality of these extraordinary artworks. 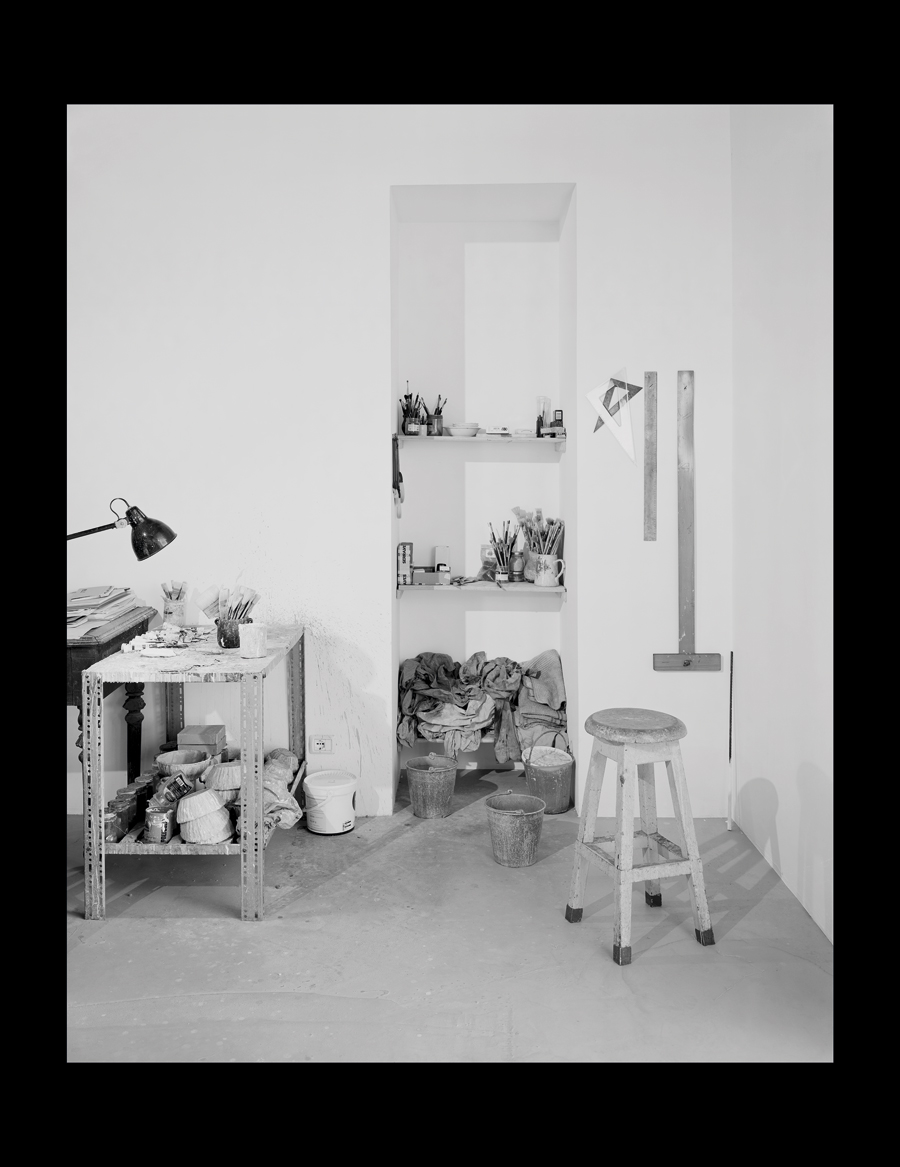 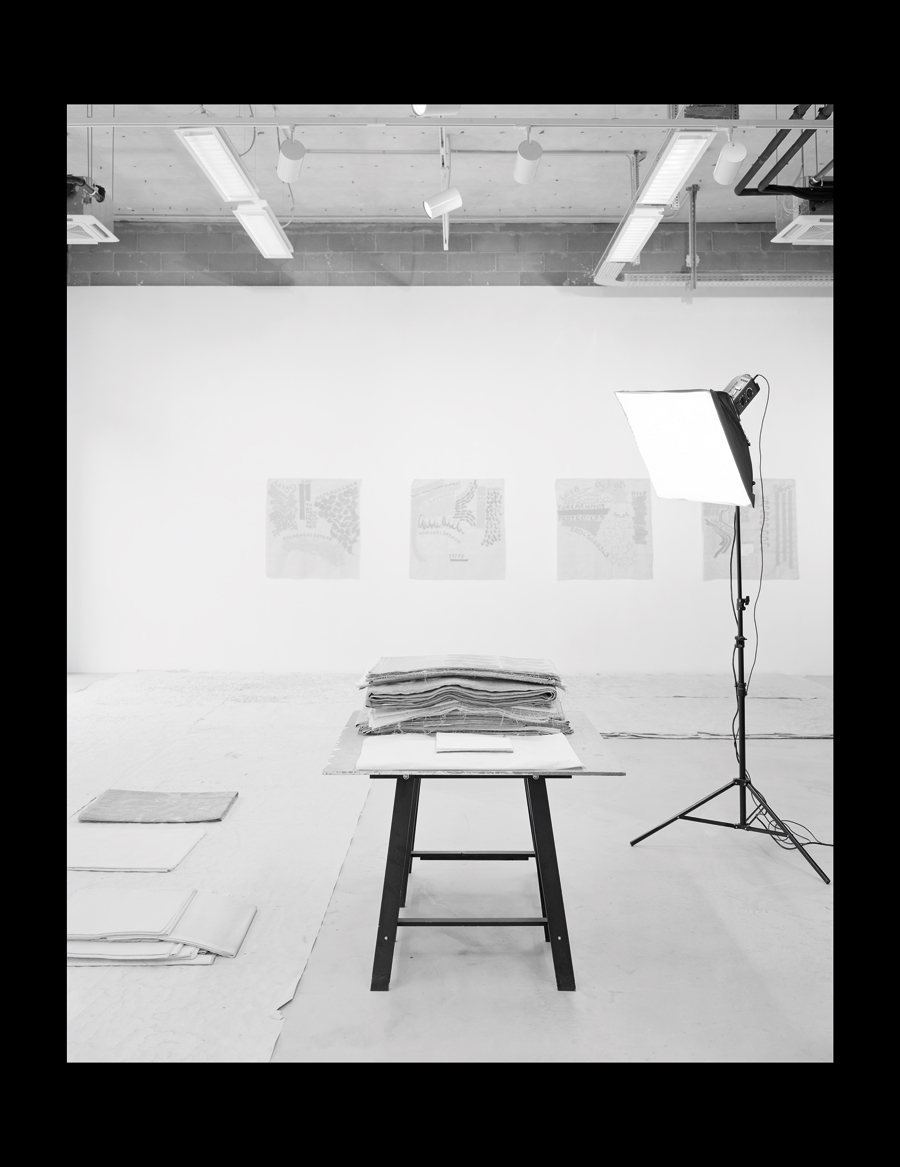 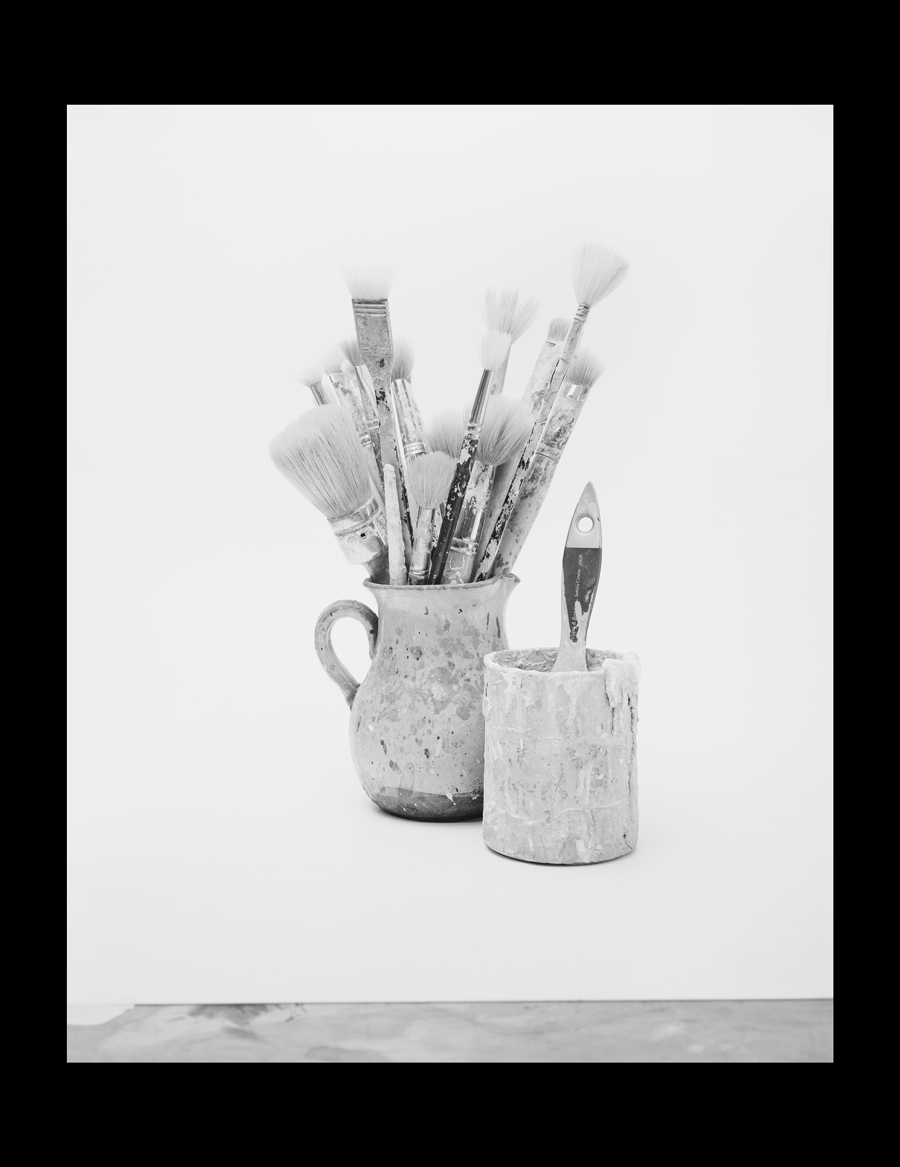 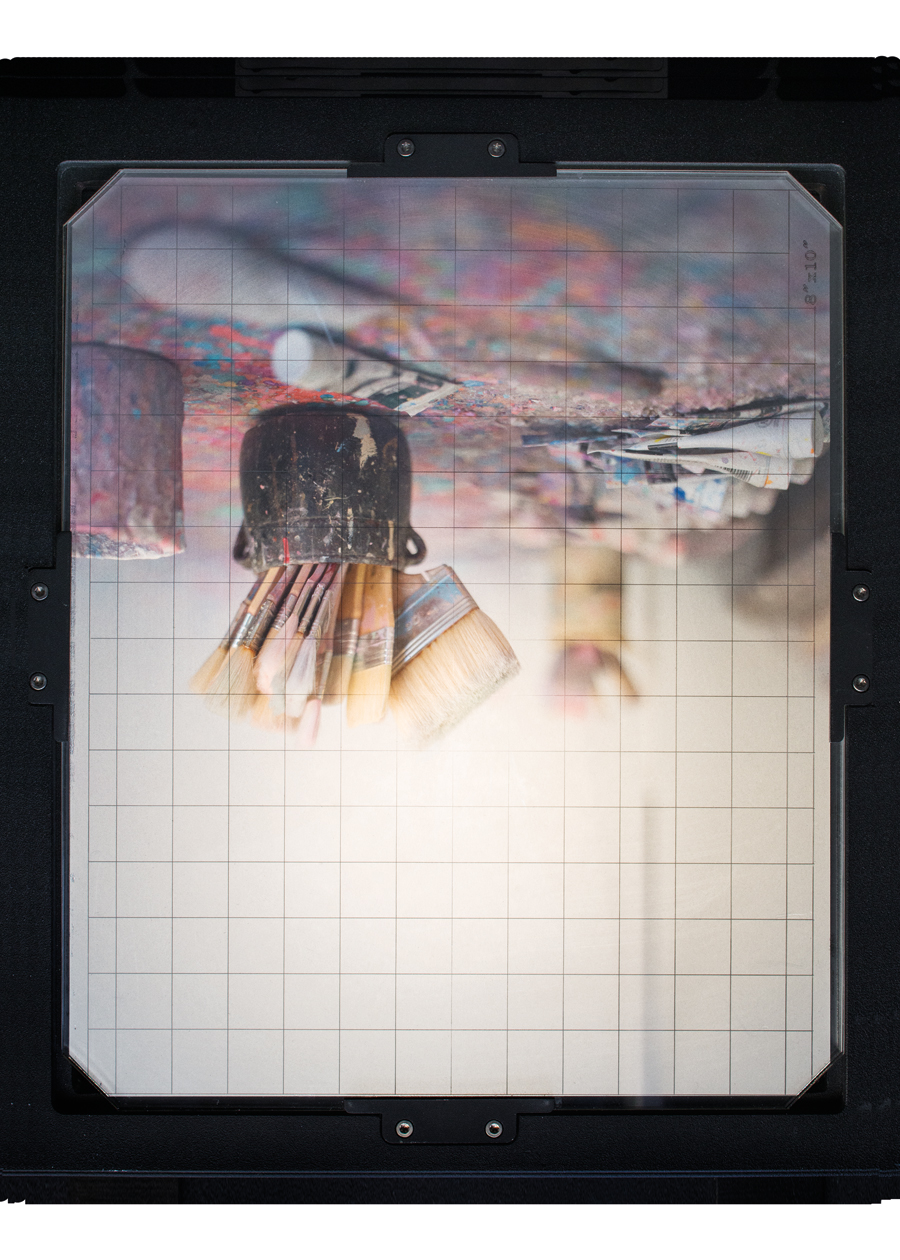 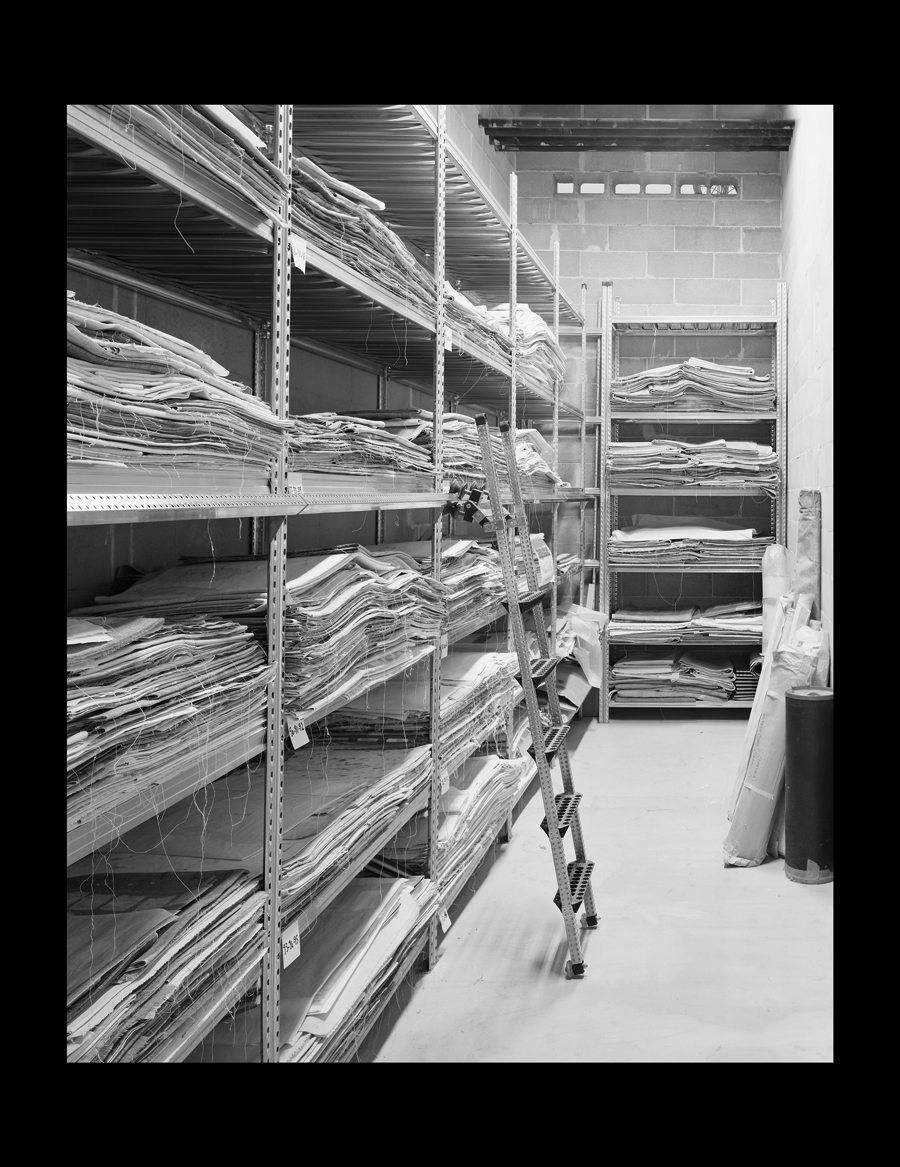 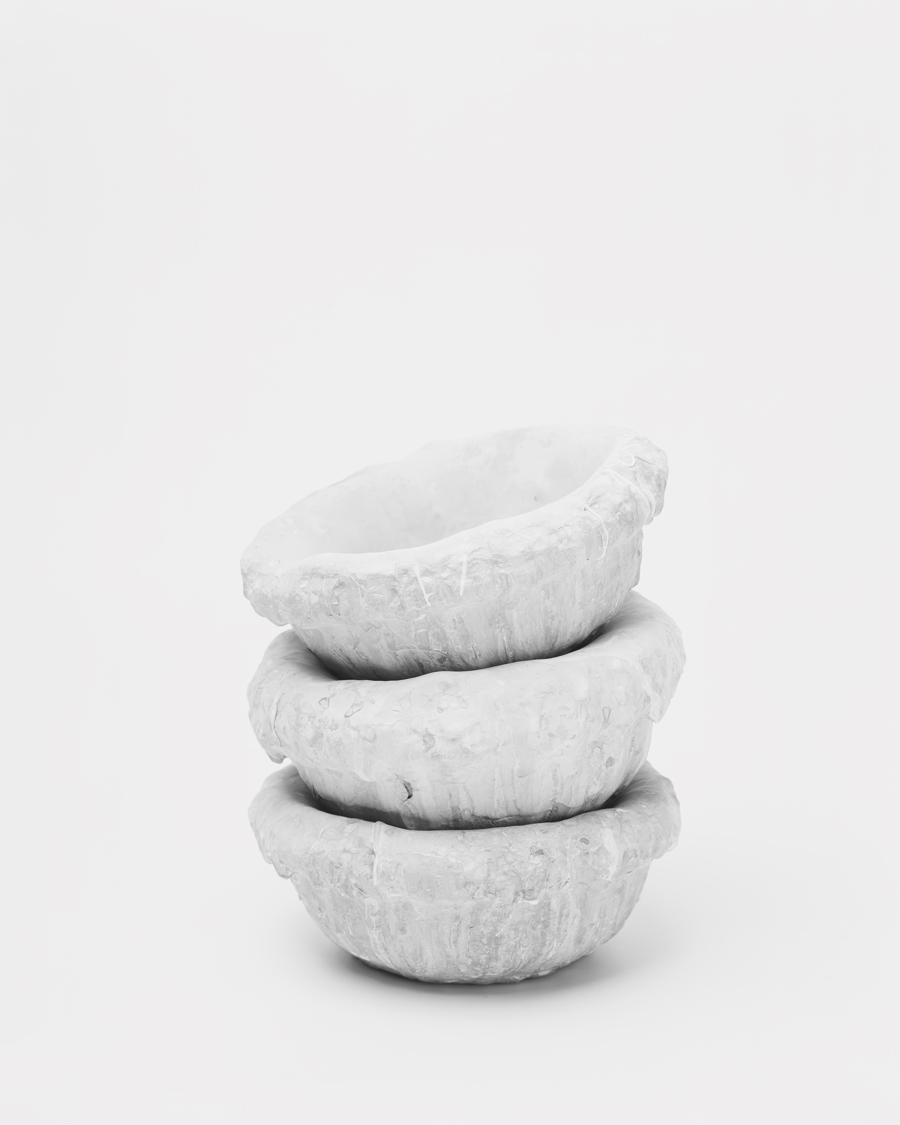 Giorgio Griffa lives in Turin, Italy. In 2017, he had a solo exhibition at Galleria Lorcan O’Neill, Rome, Italy. His first UK exhibition, ‘Giorgio Griffa: A Continuous Becoming’, is on view at Camden Arts Centre, London, until 8 April.