A Voyage of Discovery to Belgium’s Popcorn Clubs

Follow the directions on the flyer, to a small town called La Louvière in Belgium, and you find yourself inside a kebab shop. Is this the right place? There are flyers for the club on the counter, so you ask. The shop owner points you towards a heavy wooden door down an alley. You knock, and find yourself in a huge ballroom. Couples are dancing, in a formal, old-fashioned way – none of them are smiling. The record they are dancing to is an old Bill Haley record, a slow one, called ‘Hawk’ (1960). But this isn’t a rock’n’roll revival night. The next record has a similar sound, but you recognize it from a soul compilation, Dee Clark’s ‘Come Closer’ (1964). Then the dj plays Eartha Kitt, the Skatalites, some obscure Doo-wop. The atmosphere is friendly but exclusive, and the musical mood dark and opulent. This is a Belgian Popcorn club.

Popcorn is a genre after the fact, built by curation rather than creation. Its narrative was formed by Belgians in the 1970s from records made in the ’50s and ’60s – there was no such thing as a Popcorn artist, because no one had set out to make a Popcorn record in the first place. It was all in the rhythm, which had to suit the unusual ‘slow swing’ dance; it could be Latin boogaloo, an orchestrated Italian ballad or an early Tamla Motown single. The small-town venues, the fact that clubs can be in some out-of-town new-build, and open during daylight hours, makes it all slightly alien. It’s hard to explain, but when you hear the records in a row, Popcorn makes perfect sense.

There is no Popcorn look, and the artwork for flyers has no visual aesthetic other than primitive. Footage of Popcorn dancing on YouTube sends mixed messages – like a David Lynch film set in Hemel Hempstead. I first came across it in the early 1990s, when a lot of ’60s records I saw advertised had the strange tag ‘Belgian Popcorn’ attached to them. I decided to spend a weekend in Antwerp in 1992 to find out about a scene cloaked in rumours: the djs only play the first two thirds of each record, cutting them short after the second chorus (false); they always slow the record down to attain the perfect dance tempo (true); Popcorn nights were usually in people’s front rooms rather than clubs (false). After getting blank stares from other record shops, I eventually found one where the owner was playing identifiably Popcorn singles. Did he know if there were any nights on that weekend? No. Could he give me any information on Popcorn’s history? No. After a while, he told me he had never heard of Popcorn. Antwerp, someone muttered, was not a Popcorn town – I was in the wrong part of Belgium. This also turned out not to be true.

The purity of Belgian Popcorn is its very impurity. Gritty R&B is only a small part of it; filthy themes, ska, tango and loungey instrumentals are all part of the mix.

The origins of the scene are in the village of Vrasene, ten miles west of Antwerp. A cafe called De Oude Hoos, part of an old farm, opened at the end of 1969. It held Sunday afternoon dance contests; the music was largely funk and soul, and the most popular dance was the slow swing. The cafe became a full-time club, extending and re-opening as ‘The Popcorn’ after a 1968 James Brown hit. Quite quickly, dj Gibbe Govaert developed an idiosyncratic style to suit the slow swing, playing less funk and more early soul. The beat was slow and slightly rickety, martial drums rolled under melancholy minor chords – the Marvelettes’ ‘Please Mr Postman’ (1961) would have been typical. As The Popcorn grew in popularity, other clubs sprung up – the Festival in Antwerp, the Gatsby in Vliermaal, the Versailles in Ostend – playing what were now termed ‘popcorn oldies’. Radio stations started up. Records were bootlegged. Rarities commanded crazy prices. Nobody outside Belgium had a clue this was happening, but it informed a nation’s musical taste. In their 1999 book Last Night A dj Saved My Life, Bill Brewster and Frank Broughton suggest that it’s the influence of Popcorn that gave Belgians a love of slower music; it paved the way for New Beat in the 1980s or, more recently, Aeroplane’s slo-mo Balearic sound. 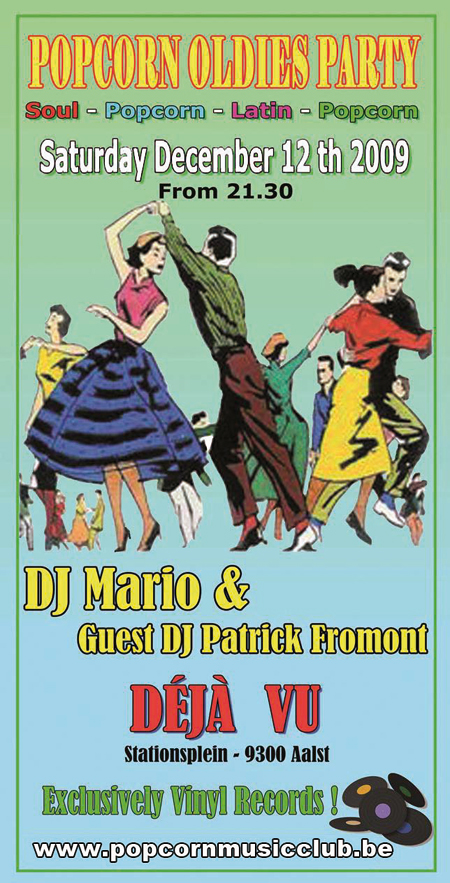 The obvious parallel is Britain’s Northern Soul scene – the fetishization of obscure, up-tempo us soul records, which began in the late 1960s and was biggest at clubs in northern towns like Wigan, Blackpool and Stoke. Northern Soul waxed and waned in popularity until the 1990s, when it seemed to go global; in the digital age, its secret loves aren’t secret anymore, and you’re as likely to hear a rare £1,000 single on a gastropub playlist in Tufnell Park as you are in a Burnley backroom club. Northern Soul is in no danger of dying out, as every new generation discovers its legend, finds some new spin on the well-worn sound and takes it back underground.

A trip to Belgium, on the other hand, shows a scene mostly populated by people over 40. There’s at least one club night on in some small town every weekend. As with every musical subgenre, the Internet has opened the scene up to outsiders, and Popcorn’s salvation is likely to come from beyond Belgium’s borders. dj Linda Couldstone – aka Linda Popcorn – makes regular trips from Stoke to Belgium to pick up new vinyl. She was originally a Northern Soul fan, a regular at Stoke’s Golden Torch club as a teenager; divorced in the 1990s and looking to rekindle her love of music, she ‘got a pc, joined file-sharing sites on the net, and met people from around the world who shared my passion for big ballads and mid-tempo tunes. I was soon put in the picture about a musical scene in Belgium, playing this slower music, dancing as couples.’ It felt entirely new to Couldstone, and she felt like the only Briton in on the secret: ‘I felt that the world was my oyster, and Belgium my pearl.’

In the 1980s, Northern Soul began to slow its pace after the high-speed Wigan Casino years. It appropriated a lot of darkly orchestrated material – Sam Fletcher’s ‘I’d Think it Over’ (1964), Johnny Maestro’s ‘I’m Stepping Out of The Picture’ (1965) – naming it ‘Big City Soul’, without any acknowledgment of the Belgian archaeologists who had first dug it up. Today, London clubs like Jukebox Jam and Pork & Beans play records from the rawer end of the Popcorn spectrum; the sound has been bleeding into sets incrementally since the recent burlesque boom and 1950s R&B became popular at nights such as Lady Luck. Niamh Lynch has also been collecting Popcorn and playing it out since the 1990s: ‘I played Neil Sedaka’s ‘Too Late’ at [long-running Mod club] the Mousetrap a couple of weeks back – I wouldn’t have got away with that a year ago.’

As the Belgian clubs have no dress code and the music has no hard and fast rules, this jars with the British trainspotter mentality. The London take is Mod cool; the scene has a rather patronizing attitude to mainland Europe. Yet by trying to make sense of it in a soul/R&B narrative, it is missing half the fun: the purity of Belgian Popcorn is its very impurity. Gritty R&B is only a small part of it; film themes, ska, tango, Phil Spector-esque girl groups, and loungey instrumentals are all part of the mixture. The best place to hear Popcorn is probably on YouTube: start with Simone Dina’s heartbreaking ‘Now I Lay Me Down To Weep’ (1963) or Jackie Weaver’s tough, sexy ‘The Tingle’ (1961) and follow your nose. It’s only a matter of time before Phil Colbert’s ‘Who’s Got the Action’ (1965) or Duffy Power’s ‘A Woman Made Trouble’ (1963) turn up in a mobile phone advert; the last undiscovered underground scene won’t stay that way forever, whatever the Belgians think.

Bob Stanley is a member of the group Saint Etienne. His book Do You Believe in Magic: The Story of Pop is due to be published by Faber & Faber next year.