An article in the New Statesman claims that a recent exhibition in Bethlehem offers a new kind political engagement – but is it as simple as that? 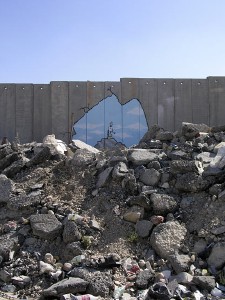 ‘Art is the New Activism’, or so the New Statesman declared on the cover of last week’s issue (21 January 2008). UK street artist Banksy recently invited a group of artists to his now annual ‘Santa’s Ghetto’ exhibition in Bethlehem; the article contends that this foray heralds a ‘rise of a guerilla movement’. Peter Kennard, one of the invitees and the author of the article, claims that the group stands in contrast to the ‘intellectual interventions’ of contemporary artists, in that Banksy et al ‘want to connect with the real world, rather than work for the market […] They combine creativity with protest insisting that art should be more than the icing on the cake for the super-rich.’

At a Brad Kahlhamer exhibition last weekend I found myself thinking about this claim. What form should art activism take if Kennard’s comment is the yardstick? Could it really be as simple as ‘sticking up a poster or painting the Separation Wall in the West Bank’? I am not convinced. The taciturn traces of violence that Kahlhamer’s work is laden with speak more to me about political struggle than Banksy’s recycled stencils. But the problem may be that I’m standing in a gallery tucked away from the glare of the public eye, part of a very small minority who will see Kahlhamer’s work.

Thinking of such loaded personal gestures brought Juan Davila to mind. The Australia-based Chilean-born artist’s prolific career typifies, in my opinion, the potency of art when engaged with political debate. Over the last 30 years, Davila has quietly protested against the social violence and hypocrisy of the Australian and Chilean governments – never courting controversy, but remaining dedicated to the belief that art has the power to raise consciousness, to act as a record of moral wrongs for posterity. Although Davila rarely comments on his work, in 2002 he told The Age newspaper that, ‘Painting can survive for a long time and when, one day, we look back to […] this government, there will be an image that tells you with very clear words that we did have concentration camps in Australia.’

More recently, Paul Chan has produced projects that bridge the divide between activism and those same ‘intellectual interventions’ that leave Kennard so unimpressed. In the wake of Hurricane Katrina Chan spent several months living and working in New Orleans, working with locals to present a series of site-specific performances of Beckett’s Waiting for Godot. In doing so Chan attracted much needed attention from the media and slow-to-react bureaucrats.

As with Davila, Chan’s approach to politically referential work stems from an understanding of the iconography of a specific situation. This is where Kennard’s argument falters. He states that his group of artists are ‘well informed about the Middle East and came to Bethlehem to show their solidarity with the Palestinians.’ Although the exhibition was no doubt well-intentioned (raising funds for the local community), there was a subsequent furore in which locals took offense at a Banksy stencil of an Israeli soldier checking a donkey for ID papers. That the work was subsequently painted over may suggest that the group’s good work is not quite resonating with the community in the way it was intended. This action may have been from a minority dissenting voice, however it does question the legitimacy of a project intent on raising awareness for the plight of the Palestinian community by means of Banksy’s rat motifs that, thanks to his prolific traveling, can be seen in many major western cities.

Before and after images of Israel’s West Bank Barrier

Surely Kennard, who has been involved in political activism for many years in the UK, knows how easily good intentions can be spun in the popular media? Does the question need to be raised as to whether artists intent on producing work that tackles political issues can only do so when utilising their own vernacular and iconography? Banksy stencils are easily recognizable as his, but do they speak of the realities of the Palestinian community? By utilising the Separation Wall as a blank canvas, the project has arguably done more to naturalise it than to reveal its illegality. So has this ‘new guerilla movement’ in art activism only served to bolster the Banksy PR campaign, or is ‘Santa’s Ghetto’ a legitimate engagement with politics?