What Dance's Interest in ‘Non-Normative Bodies' Tells Us About Ourselves

Two naked bodies lie on the floor: one, female, is very thin; a second, male, is small, his body curved in ways that suggest particularities of movement. The audience enters Halle G, the largest stage at Tanzquartier Wien (TQW). After a while, the two performers pull themselves across the floor towards the back of the stage, where seven additional performers are lined up, most in wheelchairs. This performance of Every Body Electric (2018), by Austrian choreographer Doris Uhlich, inaugurated the re-opening of TQW in January under its new artistic director, Bettina Kogler. Previously at WUK arts centre, with the move Kogler crossed the courtyard of Vienna's Museumsquartier to direct one of contemporary dance's best-funded and well-equipped institutions.

Among the most topical and controversial developments in the dance world today are works such as Uhlich’s which question the types of bodies that perform on stage. Since dance still rarely abstracts its material to the degree the other arts do, its primary focus remains the human form. This way dance puts on display and forces us to reflect on the ways we interact with, behave or consider ourselves – whether it be diverse, inclusive or otherwise. In times of urgency in what concerns diversity politics, dance institutions and performance festivals see it as their duty to increasingly programme works featuring bodies that face marginalization: artists of colour, ageing dancers, LGBTQ+ and differently-abled people and those whose physical proportions don't fit BMI-indexes – the ‘every body’ in Uhlich's title and its clear social agenda.

Yet this tendency also has garnered criticism: some performers, choreographers and directors have called this fetishization. Another suspicion is that such programming acts as a fig leaf to liberal bad conscience: so long as a philanthropic audience can consume in the performance hall what they fail to achieve socio-politically outside of it, they can feel like they’re fighting the good fight. Dance theorist Kai von Eikel wrote of a ‘bourgeois affect of compassion’ in his contribution to Disabled Theatre (2015), a book edited by Sandra Umathum and Benjamin Wihstutz exploring the discourse of diversity in dance and performance. Its title is a reference to Jérôme Bel's landmark 2012 piece for ‘neurodiverse performers’, as Bel called it. A decade of activism and reflection after Christoph Schlingensief's TV show Freakstars 3000, shot in the Thiele Winkler Home, Berlin, for people with mental and physical disabilities, Bel's work prompted fierce debates. In Germany and the United States, aspects of the performances were likened to historical freak shows or racist ethnological displays.

Particularly fraught in the discourse of inclusivity is the relationship between choreographer and performer. In the European dance festival context – with the exception of choreographers Claire Cunningham and Michael Turinsky – more performers are differently-abled than the choreographers who programme them. In 2014 the collective Monster Truck, with Marcel Bugiel, the dramaturge for Bel's Disabled Theatre, worked to overturn this imbalance. For Regie, direction was given to three performers with Down's Syndrome; a year later for Regie 2, audiences at Germany's largest ‘inclusion festival’, No Limits, were taken to watch Richard Wagner's opera The Flying Dutchman (1843) through the lens of inclusivity, so to speak. Regie 2 marked the dawn of ‘post-inclusion’ in performance. Still, questions remain about how we treat and create the aesthetics of the various forms of differently-abled bodies in dance without resorting to crass reduction.

Uhlich's interest in non-normative bodies dates to her early days as a dancer. In conversation in Vienna in January, she told me that, for the standards of professional dance, she was seen as physically overweight. Threatened with anorexia during training, she established herself as a dancer and choreographer by insisting on her physicality. ‘I can do everything, it just looks different’, she said. The dance community has changed – ‘the age of the giraffe is nearly over’ – and thinking in terms of difference has followed – a clear achievement of Uhlich and fellow choreographers. Where non-normativity is concerned, this has led Uhlich to become one of Austria’s most prominent choreographers. Having worked with both amateurs and older performers, her latest productions Habitat (2017) and Ravemachine (2017, together with Michael Turinsky) increasingly dealt with differently abled bodies. In November 2017, Ravemachine earned Vienna's Nestroy Theatre Prize for ‘inclusion on equal terms’. 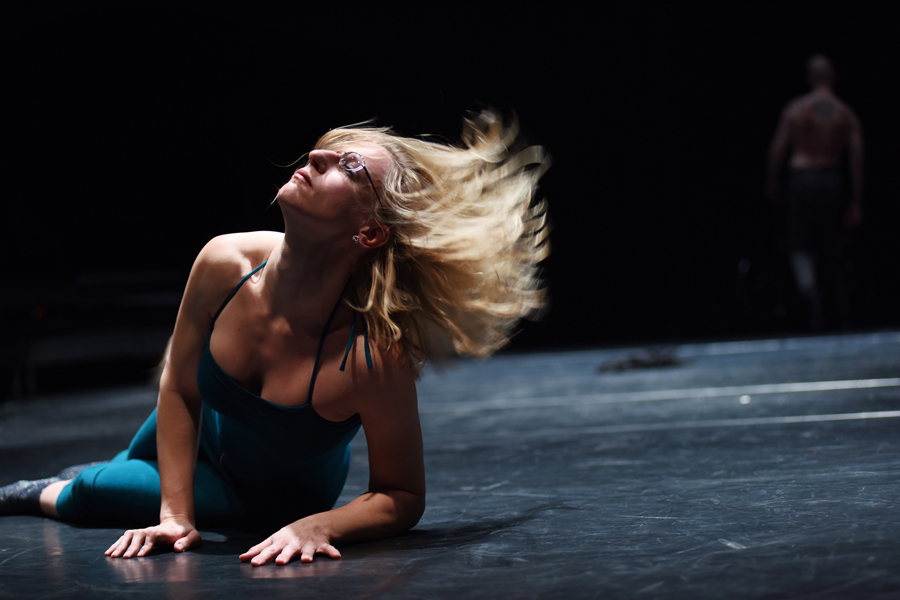 In Every Body Electric Uhlich exclusively features differently-abled performers. After the work’s prologue, the nine dancers, working in pairs and alone, sometimes naked, shake their body parts to reveal ‘energetic icons’, as Uhlich puts it – a term she uses to describe a body’s positive resonance to shaking. Her work focusses on the energies produced by bodies over their physical forms. But in my case, the performance fell short of transmitting such energy to the viewer. For me the more interesting were the rare and still-unformulated moments in which performers highlighted their relationships to their wheelchairs. These body-object dialogues recalled Uhlich's ‘dance machine’ that she constructed for Universal Dancer and shows her interest in body extensions and what she terms ‘exoskeletons’.

Shaking and bodily extension are also featured in Uhlich's outdoor performance Seismic Session (2017). Commissioned by the summer festival ImPulsTanz and Vienna’s Secession, the work took place on scaffolding (another ‘exoskeleton’) around the Secession while it was undergoing renovations. Eight dancers of different body shapes and DJ Boris Kopeinig (who also provided the music for Every Body Electric) all appeared naked. Symbolically they tried to shake the building in which Gustav Klimt's Beethoven Frieze (1901) – intended as a temporary work – is preserved in perpetuity. As if freed from a spell, clusters of bodies swarmed out from the side entrances into the adjacent park: a transformation of the sinuous amphibians of Klimt's frieze into anarchic nymphs.

Whereas Seismic Session convincingly converges symbolism with artistic technique, Every Body Electric too rarely goes beyond the effect of displaying physical peculiarities. While it might be possible to read performers’s self-exhibiting as self-empowerment, surely empowerment would involve rather a move away from showcasing? Why wasn't I watched back? And does the gesture of emancipation redeem aesthetics in cases where these are unsuccessful?

Sensitivity to different modes of representation is especially urgent in Austria, now governed by a coalition of the conservative ÖVP and the right-wing populist FPÖ who openly disparages queer and feminist arts. During TQW’s opening, thousands of demonstrators, accompanied by the largest police presence ever seen in Vienna on this occasion, marched past the Museumsquartier protesting an ‘Academic Ball’ organized by the FPÖ in the city's Hofburg palace. In this situation the standing ovation that Every Body Electric received seemed to me a clear sign of solidarity and resistance. I would have loved to join. But would this mean a co-opting Uhlich’s art as a political position rather than a valuing it as a piece in its own right? Was the applause an act of rebellion, as Uhlich’s art has been, or an act of conformity with a desirable socio-political agenda? It's quite a way to go from shaking body parts to bodies that shake the system. Bourgeois empathy can, after all, just as easily generate normative behaviour.

Astrid Kaminski writes (on) performance, poetry and social politics for a number of newspapers and magazines. She is based in Berlin.