When the Moon Shines on the Moonshine 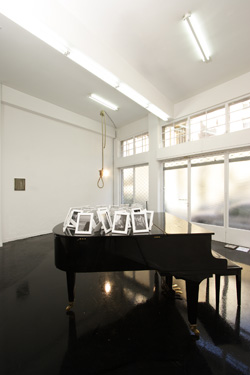 When the Moon Shines on the Moonshine’ was a 1920s song that paid tribute to the illegal production of alcohol during the time of prohibition in America. The song was made popular by Bert Williams, the first black vaudeville performer on Broadway. Under this title, curator Robert Meijer brought together artworks that connected either visually or conceptually to the idea of darkness. Biographical information about Williams, and the lyrics of the song itself (which were also used as the content of the exhibition’s press release), provided the brief to which each of the works in the show was either newly commissioned or adapted.

The repetition of black and white, and Meijer’s considered selection of works, seemed to illustrate perfectly (like the thesis of a diligent student) not only the theme of light and darkness, but also the increasing trend of neo-conceptual affinities in contemporary art – so much so, in fact, that everything in the exhibition looked homogenized at first, like the elements of a splendid stage set or a crisply ironed tuxedo. Yet, walking around, one began to sense the latent power of each individual work beneath the initial epidermic level of darkness, which risked consuming the exhibition.

Elmgreen & Dragset’s Play it Again (2006) formed the centrepiece of the exhibition. A black grand piano stood on the shiny, black-painted floor of the gallery’s upper level, dominating the space. Employing the seductive visual qualities frequently found in their work, Elmgreen & Dragset had placed a bench invitingly in front of the piano for visitors to sit on. Once seated, the viewer was confronted by 31 framed black and white pictures displayed on top of the instrument, constituting a macabre memorial to the life of a gay stripper.

The other works on this floor were also evocative of similar dark underworlds. Passing Monica Bonvicini’s hanging noose (That Hangs, 2005) and Martin Boyce’s chains suspended from the ceiling in the form of a minimal sculpture contaminated by S&M aesthetics (In this Shadow, 2005), my eyes were drawn to a regular tear-off wall calendar displaying the day’s date. Under the title Midnight (2006) Kirsten Pieroth directed a daily performance (that took place in the absence of gallery-goers) commemorating the passage of time from one day to another through a symbolic ritual. Every night for the duration of the exhibition, the gallery’s security guard would tear off the appropriate page of the calendar at midnight, and take a photograph of her hand while doing so. Installed just before the stairs descending to the lower floor, this work seemed the perfect transition from darkness to light.

Downstairs, the floor and walls were painted glossy white. Here, on the floor, lay the most lyrical presence in the show: Jason Dodge’s Diamond and Sapphires, inside a Bird (2006), a small, stuffed, orange-yellow canary. The only work in colour, it seemed to represent the real life that had been sucked out by the oxygen-less black and white environment of the show. Despite its strong visual appeal, however, the piece ultimately failed to surpass the initial impression it generated of shock and compassion. Its counterbalance was Jesse Finley Reed’s Passage (2006), a human-size silkscreen print of a black, orphic arcade that illusionistically invited viewers into a doorway of absolute darkness. This piece was among the most successful in the exhibition because it avoided the sensationalist quality of the other works – which revealed little behind their macabre masks – and effectively transcended the austere conceptual and visual framework of the show.

‘When the Moon Shines on the Moonshine’ certainly struck a hidden chord in the human psyche, successfully touching on the ‘negative spaces’ amid our daily activities – those moments that escape ‘normality’. Meijer’s exhibition managed to hint at the delicate issues of death – its imminence and our gradual acceptance of it as a natural consequence. Yet, the overstaged visual interpretation of the symbolic metaphor in the song at times overshadowed and even neutralized the strength of the individual works.