When I first encountered Franz Kafka’s short story ‘A Hunger Artist’ (1922) a year ago, it almost read as a one-liner: a fasting artist performs for an admiring public but, perpetually underestimated, he doesn’t live up to his potential until he falls out of fashion and then, left to his own devices without audience or manager, he dies. But the story’s end offers a strange twist: a robust panther takes up the Artist’s vacant cage.

The panther is a joke. He is everything the Artist isn’t, and gets all the attention. But he also represents something more elusive, perhaps a ‘return of the repressed’: the panther ripples with appetite; the Artist has withered in refusal. A psychoanalytic text, with a similar interpretation was where I first encountered ‘A Hunger Artist’. Alongside readings in psychoanalysis, I was also at the time pursuing more practical experiences within the mental health sector, eavesdropping on an eating disorder discussion group. ‘A Hunger Artist’ also felt relevant there because of the ways it spoke to the psychology of anorexia. 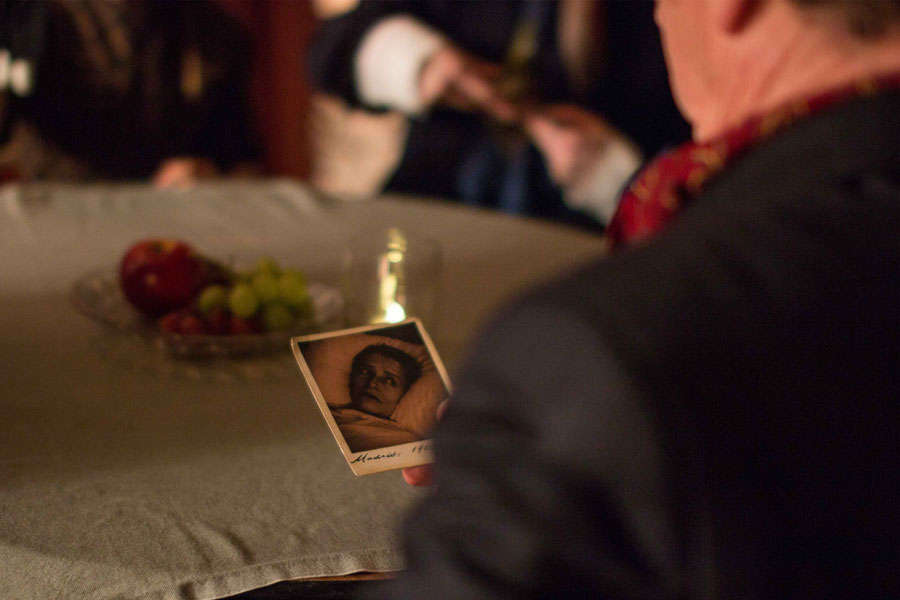 And so followed post-rationalized grant application pitches, including this excerpt, for the Wellcome Trust: The film highlights the contradiction between the human experience of our bodies as ‘objects’ and as ‘subjects’- as matter to be quantified and altered, on one hand, or as a gateway to phenomenal, lived experience on the other. The Hunger Artist’s obsession with his clock and his impresario’s enumeration of fasting days can be likened to the broader cultural trends towards ‘datafication of the body’ (counting calories and step on a smart phone) and towards self-objectification through social-media. 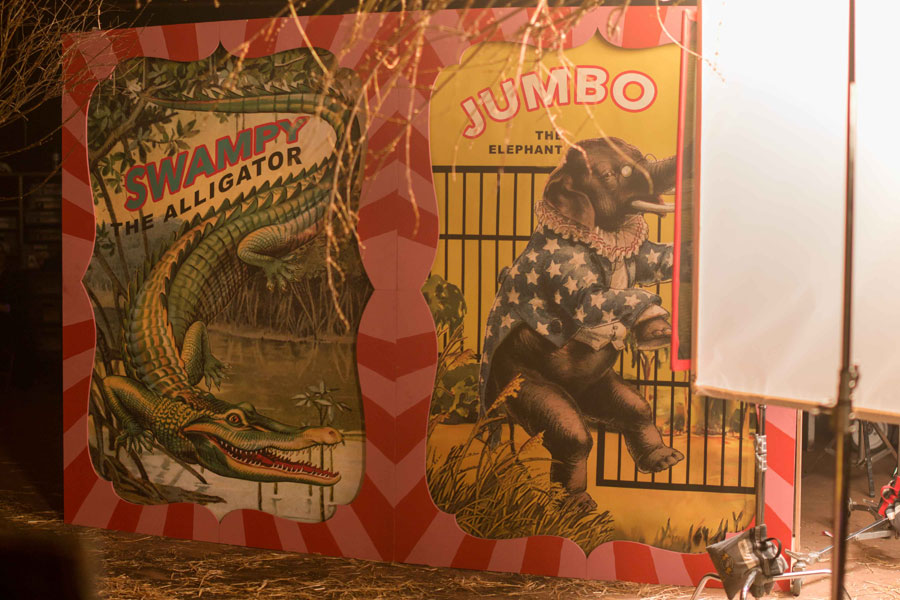 How many of these rather distant sounding appraisals will make their way into the final film? I’ll begin editing tomorrow, and as of yet I’m not sure of the answer, but what I do know is that, through its making, the film’s claim on social meaning has been filtered through many different social relations.  The first step in adapting Kafka’s text was to expand on it together with others.  Dozens of conversations, exchanges and workshops took place before our week-long shoot, primarily with the film’s playwright, Nick Gill, the director of performance, Joseph Alford, the art director Billur Turan, and the director of photography, Suzie Lavelle. Together, like archeologists, we slowly unearthed and spread before us what lay beneath Kafka’s text, and it quickly became apparent that of course the film would also be about artists, their audiences, their delusions, disappointments, and endurance. This meaning lay alongside those I had already pinpointed, and together with Kafka’s famous satirical critique of institutional power. 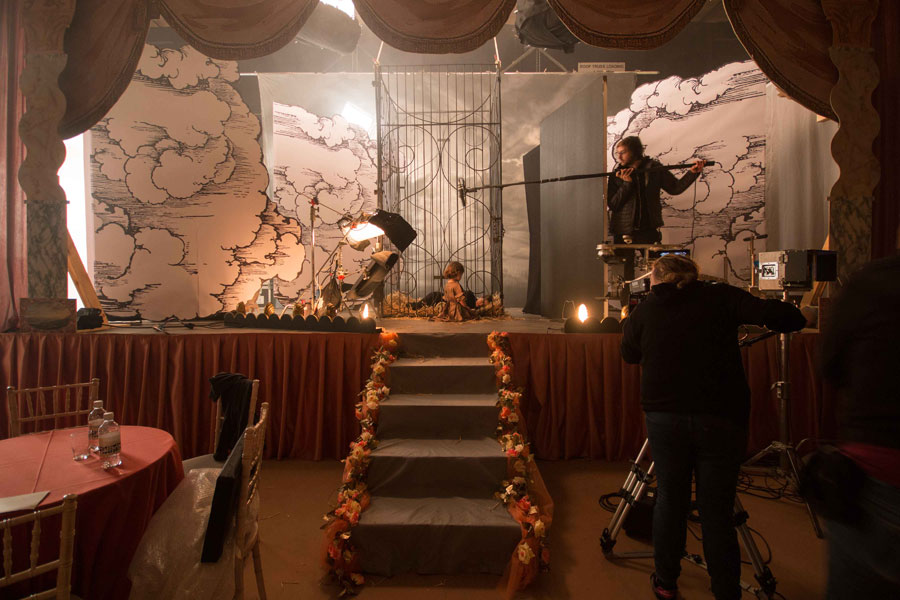 Alongside and simultaneous to this process of expansion towards a rather unwieldy film (which includes a live panther, large audiences, and even children), the work also went through processes of contraction and intensification: one year of research built towards a month of round-the-clock pre-production, leading to a week of immersive shooting, resulting in five hours of footage, which will likely boil down to 15 minutes on screen. 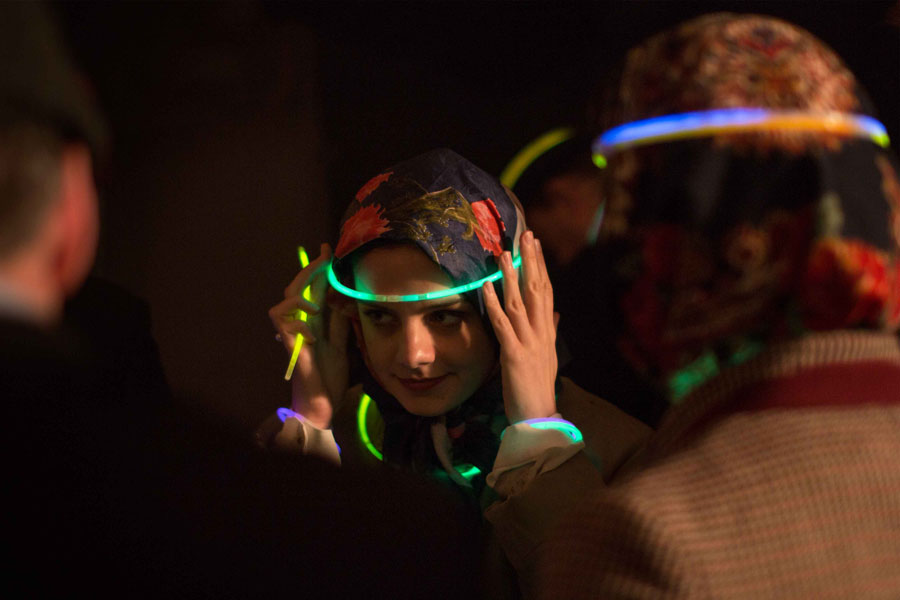 The resulting film will inevitably represent a density of decisions and a layering of sensibilities, navigated (hopefully) by an elegant through-line of narrative, as embodied by the wonderful actress Hayley Carmichael as the Artist (in drag). In many ways, the finished film, as with others, may be experienced like a dream, not only in its odd balance of phantastical levity and bodily feeling but also in its potential for many possible readings. Freud wrote that the meanings of dreams are over-determined: many equally valid associations converge at the nexus of a symbol.

Or at the nexus of a joke?

I appreciate the ways in which Kafka demonstrates characteristic Jewish humour in his story (à la Sid Caesar, or even Woody Allen) and I have tried to preserve this giddy, anti-authoritarian combination of self-aggrandizement and self-effacement, although I’m not at all not sure I’ve succeeded. I’m also reluctant to add my own trauma to the list of my associations to ‘A Hunger Artist’: a few years prior to reading the story, I had lost my Jewish father, a retired cartoonist and filmmaker, to cancer. In the end, his illness left him emaciated – like the Artist – but with his buoyant, skeptical funniness intact. Perhaps I was drawn to the story, which includes a death scene, as a way to replay and recreate the event of his loss, and  to work through some of the complex psychologies that played out in his life.

Ultimately, of course, the film’s spectators will unpack their own associations. And so, they will repeat our process of expanding on the slippery and undetermined meanings inherent in Kafka’s text, and its questions around power, narcissism, and resistance.

Daria Martin’s A Hunger Artist will premier  at the Schering Stiftung in Berlin from 13 September. It will screen on 26 October at the New York Jewish Film Festival sidebar at the Jewish Museum, New York and will be exhibited at Site Gallery, Sheffield in 2018.  The film is supported by Site Gallery, Schering Stiftung, the Wellcome Trust, the Arts Council England, St John’s College, and the Ruskin School of Art, Oxford University, where Martin is a Professor. Daria Martin in represented by Maureen Paley, London.