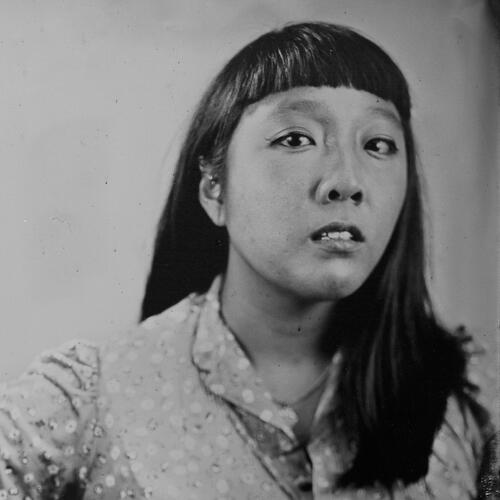 ‘Bob seems like a good listener, being a bottom and all,’ the artist Xandra Ibarra DMs me, right before I leave my  East Bay home for the airport. I told her I’d been talking to a photo of Bob Flanagan in preparation for a ‘bottom poetry reading’ at Human Resources gallery in Los Angeles, a celebration of her new show there titled ‘Nothing lower than I’, which opened earlier this year.

The photo of Bob sits on my dressing table, its drugstore gloss flimsy against my ritual objects – perfume, a posture collar fitted with an oversized O-ring, hair shorn from the scalp of a friend. A lighter printed with garish pink text and a palm tree: Miami. Bob looks affable in a maroon bathrobe, mic at his lips. It’s either just before or right after a performance. I wonder about the state of his dick and his nipples under the ugly fabric, that ‘lovesick’ meat of his, sensitive and hungry for steel, ‘just begging to be popped’, he wrote in Book of Medicine, published posthumously in 2017. (Flanagan died in 1996, at the age of 43, from complications due to cystic fibrosis.)

In an artist’s talk about the making of ‘Nothing lower than I’, Xandra speaks of how she felt invested in exploring materials of ubiquitous use in the fetish community – rubber, steel, leather, silicone, horsehair – that might be associated with countercultural edginess as a means of protectiveness, armour. But anyone in that community would be happy to tell you that donning such items is also a way to flag, to indicate your availability, your penetrability, to the desires of others. They signal an openness to engage in the complex series of negotiations that form a BDSM practice. And perhaps the geometries rendered by Xandra’s show hold a similar paradox. Sleek though they are, her sculptures reject the conceptual coldness of minimalism in favour of an evocative warmth, saturated with what’s lovingly unearthed from the archive.

Chest Rest (2020) mixes body and prosthesis. A deconstructed wheelchair features catheter ports and footrests padded with skin-coloured leather, complete with pierced, life-like nipples. Framed by metal, they mirror the close-up photographs Sheree took in 1984 of Bob’s chest, studded silver or sliced crimson – a landscape of gooseflesh and intrusion. Similarly, Free To Those Who Deserve It (2020) is a series of silicone dildos, carefully positioned in vice clamps and adorned with nails and needles: an ornate manifestation of Bob’s proclivities for cock torture. These pieces elegantly twist perspective, forcing the viewer to zoom in on segments of the body with the same attention to detail that a lover’s act of piercing or cutting would require.

A pile of leather hammers lies at the front of the room, pink like beaten skin and dribbling with blood, placed next to pincers and other hardware. In her artist’s talk, Xandra calls these ‘empathetic objects’ – instruments by which Bob’s erotic pain could be inflicted, but also through which his medical pain might be absorbed and dispersed. An embodiment of physical and emotional extremes, cycling in an infinite loop. And in the corner sits Chairs for St Vicodin and Lord Demerol (2021), two wheelchairs operating almost as displaced portraits of Bob, their leather backs flayed open and rendered in the colours of bruised flesh. Chains and locks droop from their undercarriage like a cock cage dragging down Bob’s genitalia.

It’s hard not to be moved by the labour Xandra has invested in these sculptures. Each piece, whether metal or silicone, is entirely fabricated by her hands and suffused with the kind of care one finds in Bob and Sheree’s work, and in BDSM as a whole. The leather massaged for hours, bringing vivid colour to its surface; the steel painstakingly polished. Each material Xandra presents invokes how it’s been shaped by a body, and how it might be used to shape other bodies in return. Each sculpture reanimates the past performance practices that fill her own work: with a phantom voluptuousness; an interdependence of sensation.

Notably, Bob’s handwritten slave contract appears in the show, blown-up and printed on black rubber. ‘Being of sovereign mind and my sick body,’ he writes, ‘everything I own I give to Sheree Rose Levin […] I am her total slave […] All my love and devotion forever and ever till death us do part.’

I’m struck by how literal it is, yet how much it holds. A perfunctory reading of this text might see the groundwork for a simple bond – one of dominance and subjugation. But, being given carte blanche to inflict pain requires a rigorous attunement from both parties to individual fluctuations of sensation and desire. And, under Bob’s stark gesture of devotion, lie the hundreds, maybe thousands of tiny calibrations he and Sheree would have had to make for their work and life together to be truly pleasurable. Because a slave contract is not so much a blanket promise as it is a commitment to continually remaking and redefining intimacy – incrementally and by way of consent.

In some ways, the contract between two lovers makes a new world – one predicated upon questioning the most basic principles of care, dependence and need. The accomplishment of ‘Nothing lower than I’ is that Xandra doesn’t try to replicate this single relation so much as amplify it within her unique practice, through identification with their difference, which is in turn different from hers, yet absorbed nonetheless, honoured and transformed.

When I land, LA makes me feel like Tai in the teen movie Clueless (1995), ‘a virgin who can’t drive’ – it’s a haze of Lyft receipts, blonde blowouts and Instagrammable fashion of all genres. Jeanne Vaccaro, the curator of the show and whose Tumblr I’ve religiously followed for years, puts me up in her Silver Lake apartment, immaculately decorated with vintage furniture, archival ephemera and feminist art. I experience fangirlish vertigo in Jeanne’s domestic space, which I’ve seen only in photos online. My nerves roil.

‘Yeah, I like a cold room,’ I later say to Jeanne at the event, when she asks if I can read first in a line-up of seven. The lighting is tinted purplish-pink as I get up to the mic, almost too low to see the page. Then muscle memory kicks in. ‘I’m very nervous and Elaine Kahn said she’d slap me in the face to calm me, but she isn’t here yet,’ I joke, referring to one of LA’s best poets. The audience rustles. I open myself to the room and feel it unfold, I swallow it whole as I morph into a conduit for the textures of attention that drift through me, inquisitive and lackadaisical.

In the film 100 Reasons (1991), which Bob and Sheree made with the artist Mike Kelley, Bob’s ass fills the frame as he receives 100 strokes of the paddle while reciting 100 names for this instrument of torture – with varying degrees of humour, severity and corniness. We watch it at the reading together: bruises creep over Bob’s skin, blood almost breaks to the surface. Someone leaves the room; others look away, flinch or witness with rapt fascination. I rub Elaine’s back. Someone fetches a cup of water for the person who fled. Miniscule relations dissolve and emerge between strangers and friends alike by nature of their reactions, attractions, revulsions. I think about Xandra inhabiting Bob and Sheree’s work, about what I’ve learned from Jeanne. I lean against the gallery wall and reshape it with my spine. ‘[I was] thinking about bottomhood and being an object as this abundant place,’ Xandra says. With acute sensitivity, ‘Nothing lower than I’ charts the mobile dynamics of Bob and Sheree’s relationship. But it also points towards the possibility of a radical refiguration of love. It reminds us that, by investing consensual care in the layers of history, reality and fantasy we share between ourselves, we can also alter the textures of our world.

Because I want to know you. And the person who came before you. And that can be a path to touching the divine.

This article first appeared in frieze issue 228 with the headline ‘Devotion Studies’.

Trisha Low is the author of The Compleat Purge (Kenning Editions, 2013) and Socialist Realism
(Emily Books, 2019).