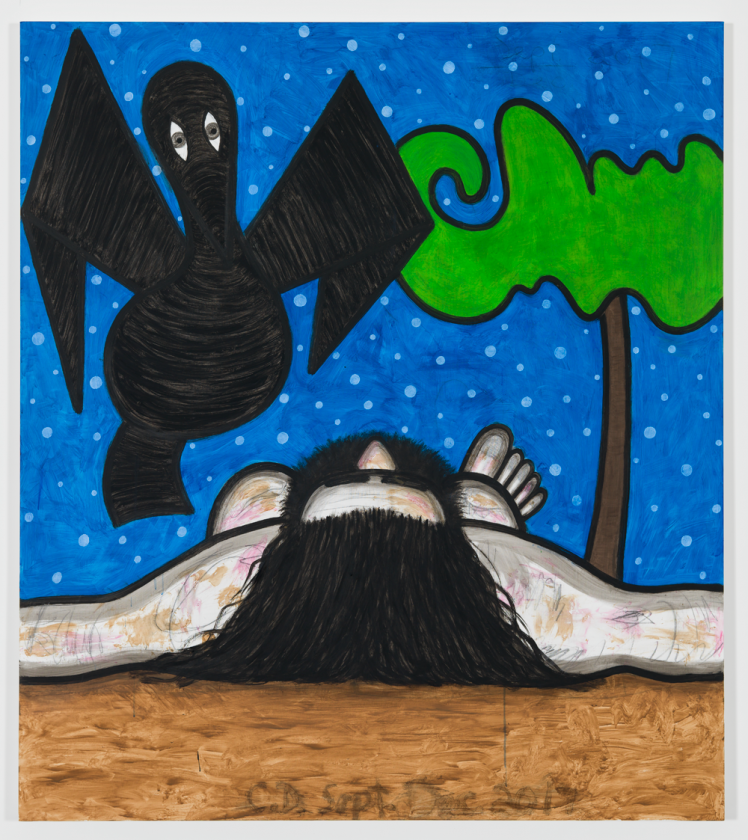 In Carroll Dunham’s new, untitled exhibition at Gladstone Gallery, paintings of nude, hunky wrestlers – their muddy bodies stained with blood, their anuses stylistically prolapsed, their dicks notably flaccid – engage in manly struggle across rural landscapes. Following the artist’s utopic, 2015 series of women bathers, these men would have nothing to do with such peace; here, in canvases that glow as if made in Crayola marker, Dunham has infused his subjects with a comic, self-annihilating masculinity. In Green Hills of Earth (3) (all works 2017), two men hold their clubs above one another, ready to strike their enemy down. In the series ‘Left for Dead’, corpse-grey men lay on the grass, their black hair splayed before us, in mortal defeat or, perhaps, exhaustion. (Has he dispatched his enemy, or has he himself been dispatched?) The promise of peace appears just once in the exhibition, in Mud Men, which shows the men holding hands in a brown lake, their backs to the viewer, their rears quite plump. The painting – its figures roughly human-scaled – hangs down a long hall at the centre of the gallery, far from the rest of the exhibition, as if only a dream, or fantasy, of rapprochement. In other works, ominous, oversized black birds hover in the air or land upon their chests, strange signs of some possessive afterlife, lingering like fate.