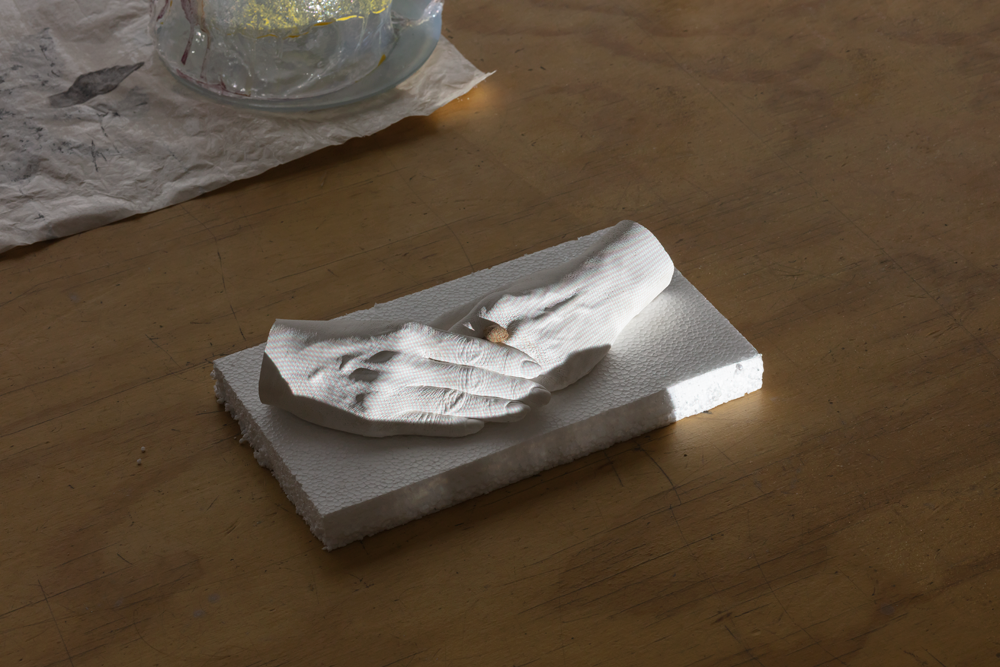 The Korean-American artist and novelist Theresa Hak Kyung Cha once described memory ‘as a collective source, as almost having physical and organic dimensions … It represents a body of time […] within which our existence is marked like a wound.’ At the time of that writing – which artist Cici Wu quotes extensively in the press release to her show ‘Upon Leaving the White Dust’ – Cha was attempting to finish her 1980 film White Dust from Mongolia, with her brother James in South Korea. Neither the film nor its accompanying novel was completed when a New York City security guard raped and murdered Cha in 1982. In Wu’s astonishing exhibition – her first solo show at 47 Canal – the artist returns to Cha’s unfinished work in a melancholy installation and film that presents, as homage, the wounds left by memory and time.

Wu’s show features small, mostly white, plaster-cast objects arranged in a grid on the gallery’s blonde wood floor: hands posed atop one another, bare feet, a mop, a train’s locomotive car, Lehmann Gross Bahn train tracks, an airplane and small, globular lights that pulse faintly in the half-dark. The objects are partially lit by a stark white film which fluctuates in brightness based on light data collected from Cha’s White Dust. In the dimly lit gallery, one might be tempted to first refer to the space as ‘dreamy’ or ‘dream-like’. It isn’t. Instead, Wu’s pieces crackle with the presence of history and the obscure mysteries that lie within them. ‘Upon Leaving’, with its ‘plurality of entrances’, as Wu writes, recalls Freud’s interpretation of the uncanny as the familiar which the subconscious has made unfamiliar. Here, world-historical narratives have plunged into small objects, endowing them with pasts – and futures – the present has scrambled to suppress.