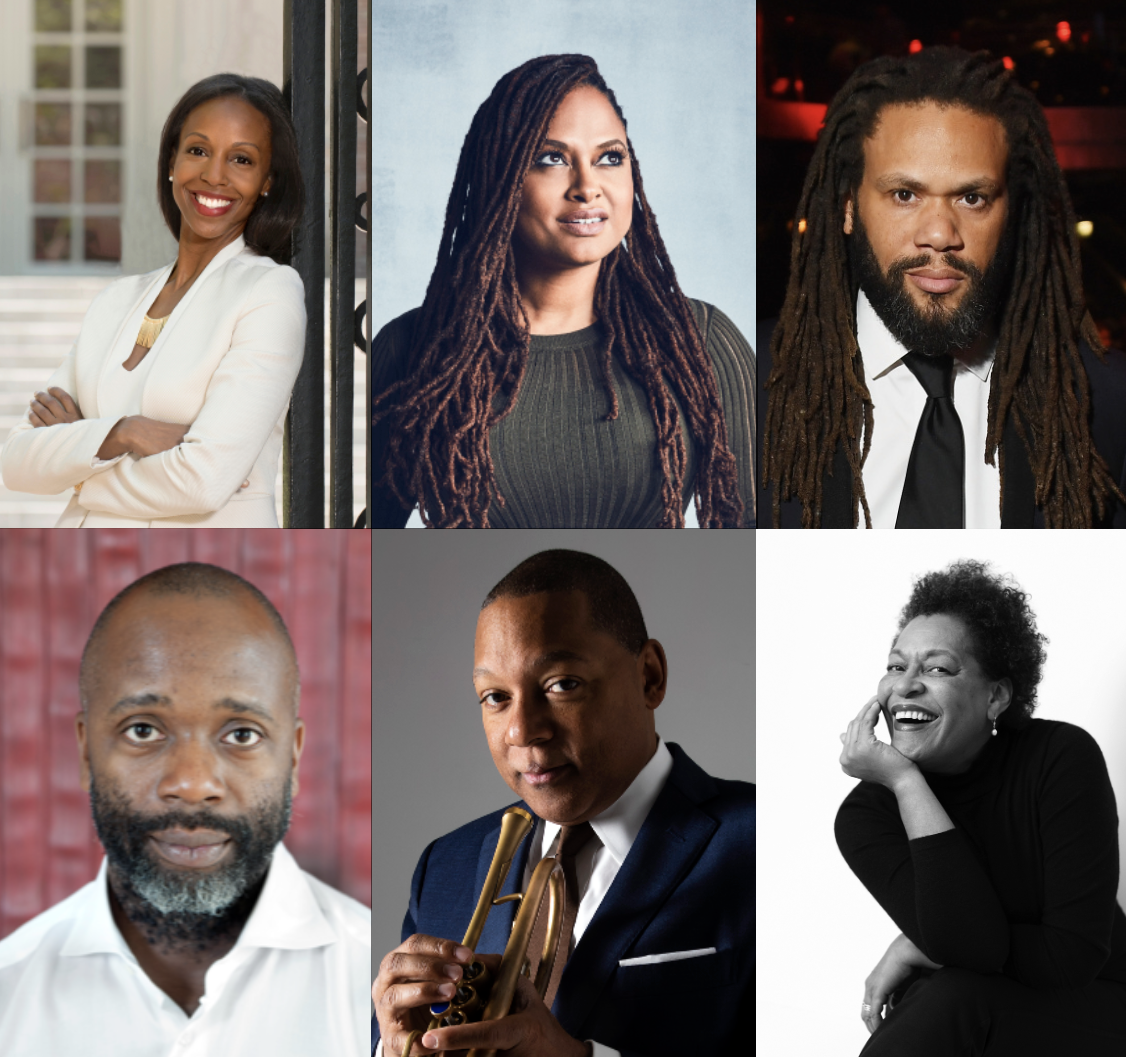 As part of the program in tribute to the Vision & Justice Project, Professor Sarah E. Lewis presents an online discussion on Black cultural leadership with

Academy Award nominee and Emmy, BAFTA and Peabody Award winner Ava DuVernay is a writer, director, producer and film distributor. Her feature directorial work includes the Oscar-winning civil rights drama Selma, the Oscar-nominated social justice documentary 13th and the Disney children’s adventure A Wrinkle in Time, which made her the highest-grossing Black woman director in American box office history. In 2019, she created, wrote, produced and directed the Emmy Award-winning limited series When They See Us. She is currently in production on Colin In Black and White for Netflix and Home Sweet Home for NBC, and in post-production on Queen Sugar for OWN and DC Comic event series DMZ for HBO Max. Winner of the 2012 Sundance Best Director Prize for her independent film Middle Of Nowhere, DuVernay amplifies the work of Black artists, people of color and women of all kinds through her narrative change collective ARRAY, named one of Fast Company’s Most Innovative Companies. She currently sits on the Board of Governors of the Academy of Motion Picture Arts and Sciences, the Advisory Board of the Academy of Television Arts and Sciences and the Board of the American Film Institute.

Through image and text, film and performance, and her many convenings with individuals across a multitude of disciplines, Carrie Mae Weems has created a complex body of work that centers on her overarching commitment to helping us better understand our present moment by examining our collective past. Weems has received a multitude of awards, grants, and fellowships including the MacArthur Award; US Department of State’s Medals of Arts; Joseph H. Hazen Rome Prize Fellowship from the American Academy in Rome; the National Endowment of the Arts; and the Louis Comfort Tiffany Award, among many others. Major solo exhibitions of Carrie’s work include Carrie Mae Weems: The Museum Series, Studio Museum in Harlem, New York (2014), and Carrie Mae Weems: Three Decades of Photography and Video, Frist Center for the Visual Arts, Nashville, and traveled to: Portland Art Museum, Oregon; Cleveland Museum of Art, Ohio; Cantor Center for Visual Arts, Stanford University; Guggenheim Museum, New York, 2013 - 2014. She is represented in public and private collections around the world, including the Metropolitan Museum of Art, NY; Tate Modern, London, England; the Museum of Modern Art, NY and Museum of Contemporary Art, Los Angeles. Ms. Weems is represented by Jack Shainman Gallery and is currently Artist in Residence at the Park Avenue Armory and Syracuse University. She lives in Syracuse, New York with her husband Jeffrey Hoone who is Executive Director of Light Work.

Franklin Leonard is a film and television producer, cultural commentator, and entrepreneur. He is the founder and CEO of the Black List, the company that celebrates and supports great screenwriting and the writers who do it. He's been one of Black Enterprise magazine’s “40 Emerging Leaders for Our Future,” and Fast Company’s “100 Most Creative People in Business.” He received the 2019 Evelyn F Burkey Award from the Writers Guild of America, East for 'recognizing a person or organization whose contributions have brought honor and dignity to writers. He is a contributing editor at Vanity Fair and a member of BAFTA and the Academy.

Theaster Gates lives and works in Chicago. Gates creates works that engage with space theory and land development, sculpture and performance. Drawing on his interest and training in urban planning and preservation, Gates redeems spaces that have been left behind. Known for his recirculation of art-­‐ world capital, Gates creates work that focuses on the possibility of the “life within things.” His work contends with the notion of Black space as a formal exercise – one defined by collective desire, artistic agency, and the tactics of a pragmatist. In 2010, Gates created the Rebuild Foundation, a nonprofit platform for art, cultural development, and neighborhood transformation that supports artists and strengthens communities through free arts programming and innovative cultural amenities on Chicago’s South Side.  Gates has exhibited and performed at Tate Liverpool, UK (2020); Haus der Kunst, Munich (2020); Walker Art Centre, Minneapolis (2019); Palais de Tokyo Paris, France (2019); Sprengel Museum Hannover, Germany (2018); Kunstmuseum Basel, Switzerland (2018); National Gallery of Art, Washington D.C., USA (2017); Art Gallery of Ontario, Canada (2016); Fondazione Prada, Milan, Italy (2016); Whitechapel Gallery, London, UK (2013); Punta della Dogana, Venice, Italy (2013) and dOCUMENTA (13), Kassel, Germany (2012). He was the winner of the Artes Mundi 6 prize and a recipient of the Légion d’Honneur in 2017. In 2018, he was awarded the Nasher Prize for Sculpture, and the Urban Land Institute, J.C. Nichols Prize for Visionaries in Urban Development. Gates received the 2020 Crystal Award for his leadership in creating sustainable communities. Gates is a professor at the University of Chicago in the Department of Visual Arts and the Harris School of Public Policy, and is Distinguished Visiting Artist and Director of Artist Initiatives at the Lunder Institute for American Art at Colby College.

World-renowned trumpeter, bandleader and composer, Wynton Marsalis is a leading advocate of American culture. Wynton assembled his own band in 1981 and promptly began touring, performing over 120 concerts annually for 15 consecutive years. With the power of his musicianship, the compelling sound of his swinging bands and a far-reaching series of performances and music workshops, Marsalis rekindled interest in jazz worldwide and inspired a renaissance that attracted a new generation of fine young talent to jazz. Marsalis has recorded over 100 jazz and classical recordings, which have garnered nine GRAMMY Awards® and sold over 7 million copies worldwide. In 1997, Marsalis became the first jazz artist to be awarded the prestigious Pulitzer Prize in Music for his oratorio Blood on the Fields. Wynton Marsalis presently serves as Managing and Artistic Director of Jazz at Lincoln Center and Director of Jazz Studies at Juilliard.

Sarah Elizabeth Lewis is an associate professor at Harvard University in the Department of History of Art and Architecture and the Department of African and African American Studies. Her research focuses on the intersection of African American and Black Atlantic visual representation, racial justice, and representational democracy in the United States from the nineteenth century through the present.

Her award-winning ‘Vision & Justice’ issue of Aperture magazine received the 2017 Infinity Award for Critical Writing and Research from the International Center of Photography and launched the larger Vision & Justice Project, based on the topic of her core curriculum course at Harvard University. Her forthcoming publications include Caucasian War: How Race Changed Sight in America (Harvard University Press, 2022), The Vision and Justice Project (One World/Random House), an anthology on the work of Carrie Mae Weems (MIT Press, 2021) and a manuscript focusing on the “groundwork” of contemporary arts in the context of Stand Your Ground Laws. Lewis is also the author of The Rise: Creativity, the Gift of Failure, and the Search for Mastery (Simon & Schuster, 2014), a story-driven investigation of advantages gleaned from improbable foundations, even failure, in the creative process. The work has been translated into six languages to date.

Before joining the faculty at Harvard, she held curatorial positions at The Museum of Modern Art, New York and the Tate Modern, London. She also served as a Critic at Yale University School of Art. She has served on the boards of the Andy Warhol Foundation of the Visual Arts and The Brearley School, is a current board member of Creative Time, Thames & Hudson Inc., Harvard Design Press and serves on the Yale University Honorary Degrees Committee. A frequent speaker at universities and conferences, her mainstage TED talk, ‘Embrace the Near Win,’ has received over 2.8 million views. Her scholarship and research have been profiled by outlets including The New York Times and The Wall Street Journal. She received her bachelor’s degree from Harvard University, an M. Phil from Oxford University, and her Ph.D. from Yale University. She lives in New York and Cambridge, MA.

This event is made possible with the support of