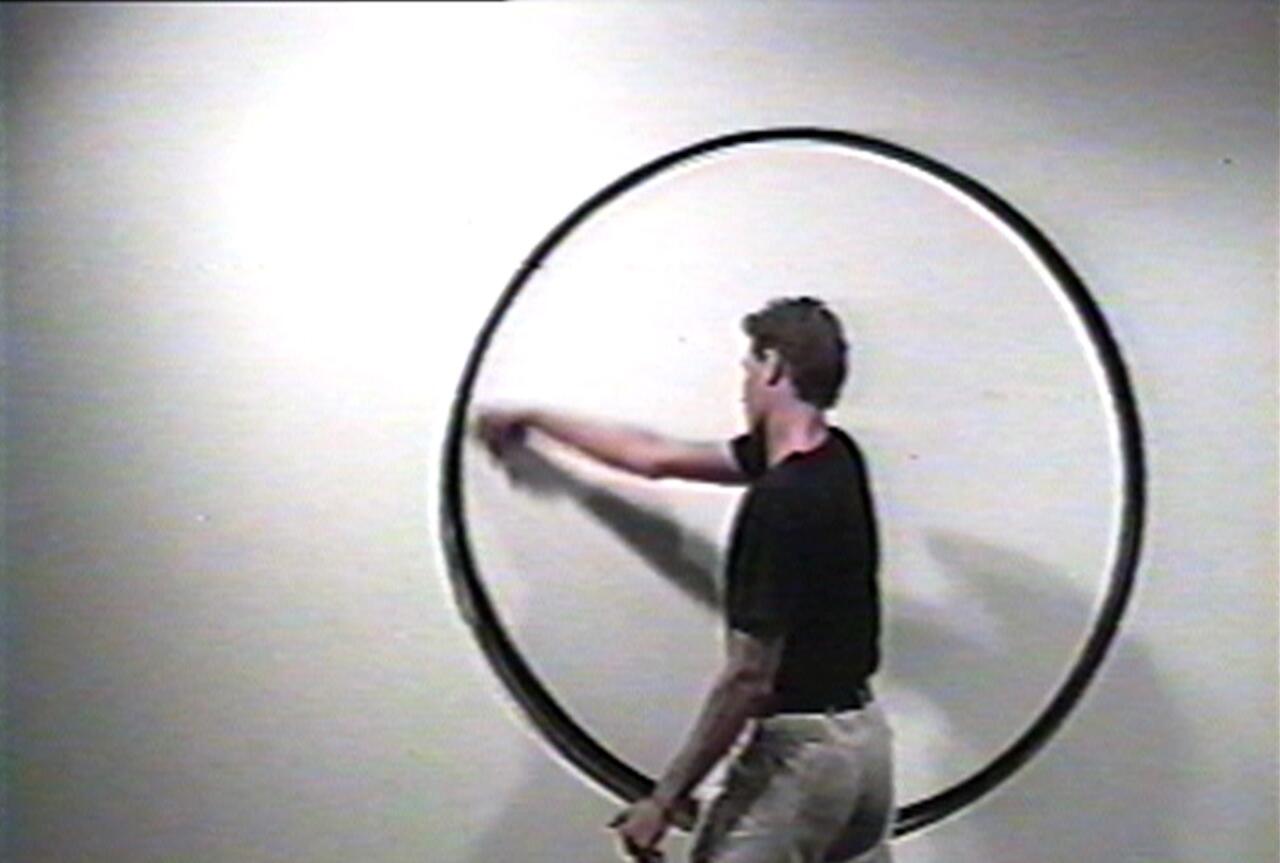 James Nares (she/her, b. London, 1953) has lived and worked in New York since 1974. Across Nares’ five-decade career, the artist’s cross-disciplinary practice has investigated, challenged and expanded the boundaries between gesture, motion, and time. Often exploring tools as an extension of the body, her work— encompassing film, music, painting, photography, and performance—examines the ways we connect to our built environment through movement, memory, and experience. A key figure of the Downtown scene in New York City in the 1970s, Nares continues to innovate and invent how both the body and machines (cameras, pendulums, and industrial equipment, among others) create images. In the artist’s words, “Things in motion; motion in things. The body has fluid; the fluid has body.”

Revisiting these themes through aesthetically diverse mediums, the rhythmic sensibility at the core of Nares’ work is marked by a commitment to understanding the fluid nature of body and form through tactile processes in service of her compositions. With a renewed attention to the artist’s films, which have comprised a major component of Nares’ conceptual practice alongside her emblematic two-dimensional work, the exhibition encompasses both static and moving image. As Amy Taubin writes in Artforum, the artist repeatedly runs “potent, related ideas—about movement and stillness, ritual and improvisation, interior and exterior—through multiple media to define the particularities of each.”2 Spanning works from the 1970s to the present, the exhibition underscores Nares’ contribution to experimentation with the corporeal form as an apparatus that helped to define a generation in American art. This exhibition will be Nares’ inaugural return to the UK after 50 years of living in New York.

This show builds on the success of the artist’s first major museum retrospective, James Nares: Moves at the Milwaukee Art Museum. It is the transfer of motion in gestural passages of “time and motion” which unites the work on view. Manifesting a careful choreography of spontaneity and control, the seminal Brushstroke (1992–ongoing) paintings and films such as Pendulum (1976) exact the artist’s underlying attention to how energy is transferred to create image and narrative. In the HIGH SPEED DRAWINGS (2014–ongoing), Nares moves at incremental speed while holding a specially designed brush and releasing a constant flow of ink onto the drawing itself which rotates in front of her on a motor driven steel drum. In her RUNWAY PAINT PAINTINGS (2016) as in the ROAD PAINT PAINTINGS (2013-2015), Nares paints with an industrial machine which releases a reflective thermoplastic paint, normally used for painting the white lines on roads and runways. The fabric of New York City considered as material—both of trace and source of action—is recalled in Monuments (2019) where rubbings of the city’s oldest surviving sidewalks, once engraved by anonymous immigrant masons, are gilded in 24 karat gold, and in the critically acclaimed film STREET (2011), whose slow-motion footage unfolds in a hypotonic and mesmerizing portrait of the urban landscape. Between the premises of physics and the physical—from body to brush, from hand to machine—the selection of recent and historical works in All I Know join in revealing new dialogues within Nares’ approach to gesture as a vision of time that is at once immediate and elongated.

As a complement to the exhibition, Kasmin at No.9 Cork Street will host a series of curated programs, talks, and screenings.