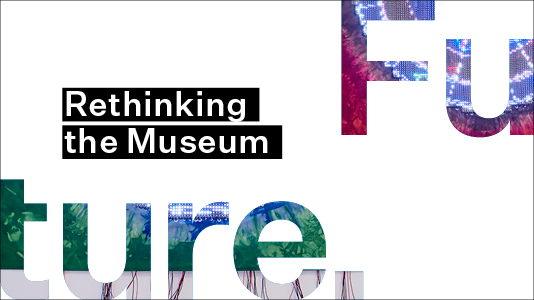 Watch Recordings of the Symposium

Join Kunstsammlung Nordrhein-Westfalen for an online symposium thinking about individual museum histories as vantage points to initiate a discussion about a new museum culture that contributes to human dignity, social justice and global equality.

Every museum is built on a unique foundation, cares for a specific collection of art, and acts within its own social field. Recently, a great variety of new approaches and methodologies have been explored which reshape and rethink old museum models. How should museums operate in the future? How can they remain relevant for our cultural life? How can they embrace plurality and a more global perspective

Rethinking the Collection
A Legacy for the Future

The Kunstsammlung Nordrhein-Westfalen – North Rhine-Westphalia’s public art collection located in Düsseldorf – is an internationally renowned museum for modern, postwar and contemporary art. At its two venues, K20 and K21, it presents a multifaceted, critically engaging and thought-provoking programme of exhibitions that engages the urban community in a sustained dialogue. Located on Grabbeplatz, K20 showcases key works from its modern and postwar collection in dialogue with recently acquired artworks by Etel Adnan, Kader Attia, Hassan El-Telmisani, Carmen Herrera and Lygia Pape. K21 in the Ständehaus is dedicated to the current developments in the field of contemporary art, and features installations, video works and multi-disciplinary approaches by Ei Arakawa, Cao Fei, Tomás Saraceno and Ai Weiwei, among others. Both venues are vital public spaces and open to everyone.

Doryun Chong is the deputy director and the curatorial and chief curator of M+, a new museum of visual culture that will open its Herzog & de Meuron-designed building in 2020, in Hong Kong’s West Kowloon Cultural District. Appointed as the inaugural chief curator in 2013, Chong oversees all curatorial activities and programmes, including acquisitions, exhibitions, learning and public programmes, and digital initiatives encompassing the museum’s three main disciplinary areas of design and architecture, moving image and visual art.  Some of the exhibitions he has curated or co-curated at M+ include ‘Mobile M+: Live Art’ (2015), ‘Tsang Kin-Wah: The Infinite Nothing, Hong Kong in Venice’ (2015), ‘Samson Young: Songs for Disaster Relief World Tour’ (2018) and ‘Noguchi for Danh Vo: Counterpoint’ (2018). Prior to joining M+, Chong worked in various curatorial capacities at the Walker Art Center in Minneapolis (2003–9) and The Museum of Modern Art, New York (2009–13).

Martje Esser was artistic director of the Falckenberg Collection, Hamburg, from 2001 to 2008. In 2020, she received her doctorate in art history from Düsseldorf Academy of Art. Earlier this year, her book Werner Schmalenbach und die Stiftung Kunstsammlung Nordrhein-Westfalen. Eine Staatsgalerie im Aufbau was published by Deutscher Kunstverlag. She is currently working as an advisor for an art insurance company.

Susanne Gaensheimer is an art historian, curator and museum director. Since 2017 she has been the director of Kunstsammlung Nordrhein-Westfalen in Düsseldorf. She has so far realized exhibitions for K20 and K21 on Carmen Herrera, Maria Hassabi, Raqs Media Collective, Ai Weiwei, Edvard Munch, Pablo Picasso, Thomas Ruff and Hito Steyerl, among others. She previously held the positions of director of Westfälischer Kunstverein, Münster (1999−2001), and head of collection of modern and contemporary art and curator at Lenbachhaus, Munich (2002−8). From 2009 to 2017 she was the director of the Museum für Moderne Kunst (MMK) in Frankfurt, where she curated shows on the work of Franz West (2013), Hélio Oiticica (2013), Isa Genzken (2014) and Kader Attia (2016), among many others. She curated the German Pavilion of the 54th and 55th Venice Biennales, presenting Christoph Schlingensief (Golden Lion) in 2011, and Ai Weiwei, Romuald Karmakar, Santu Mofokeng and Dayanita Singh in 2013. In 2014 she was responsible for the foundation of a second MMK branch, MMK 2. Gaensheimer teaches at Johann Wolfgang Goethe University in Frankfurt, where she has been an honorary professor since 2016. She has been an editor of and contributor to numerous publications and exhibition catalogues.

Jennifer Higgie is an Australian writer who lives in London. Previously the editor of frieze magazine, she is the presenter of Bow Down, a podcast about women in art history; the author and illustrator of the children’s book There’s Not One (Scribble, 2016); the editor of The Artist’s Joke (Whitechapel Gallery, 2007); and the author of the novel Bedlam (Sternberg Press, 2006). Her new book on women’s self-portraits, The Mirror and The Palette, was published by Weidenfeld & Nicolson (2021). She is currently working on a book about women, art and the spirit world. She also writes screenplays.

Ruth E. Iskin edited the book Re-envisioning the Contemporary Art Canon: Perspectives in a Global World (Routledge, 2016), which has been widely used by museums in their quest to reinstall permanent collections to reflect greater diversity and gender representation.  Most recently she has co-edited the book Collecting Prints, Posters and Ephemera: Perspectives in a Global World (‎Bloomsbury, 2019). She is also the author of several books and numerous essays in journals and collected volumes, as well as in museum exhibition catalogues.

Omar Kholeif was born in Egypt to Sudanese and Egyptian parents. They are a writer, curator, cultural historian, and the director of collections and the senior curator at Sharjah Art Foundation. Trained as a political scientist, Kholeif’s career began as a journalist and documentary filmmaker, before they entered the picture palace of museums. The focus of their practice considers the ontological possibilities made visible through emerging digital technologies as they intersect with debates around queer, postcolonial and critical race theories. They have curated over 100 exhibitions of art, design and architecture on six continents, and are the author, co-author or editor of 33 books, which have been translated into 12 languages. Recent volumes include Goodbye, World! Looking at Art in the Digital Age (Sternberg, 2018), The Artists Who Will Change The World (Thames and Hudson, 2018) and Art in the Age of Anxiety (SAF/Mörel/MIT Press, 2021). They are currently completing a monograph entitled Internet Art: The First Thirty Years (Phaidon, 2022) and an anthology of essays entitled Code-Switchers: The Art of Being Invisible (2022/2023).

Koyo Kouoh was appointed the executive director and chief curator at Zeitz MOCAA in Cape Town in March 2019. Cameroonian-born Kouoh has already made a significant impression, launching an ambitious programme of symposia, summits and special commissions as well as overseeing a survey of Nigerian-born Otobong Nkanga’s first exhibition in South Africa, and working on the first retrospective of Tracey Rose. Previously, Kouoh was the artistic director of RAW Material Company, an exhibition space, artists’ residency and centre for critical education in Dakar that was founded by her in 2008. As an independent curator, she has organised exhibitions internationally – including ‘Body Talk: Feminism, Sexuality and the Body in the Work of Six African Women Artists’; a touring group show, including Rose, that debuted at Wiels, Brussels, in 2015; the 37th EVA International in Limerick in 2016; and ‘Dig Where You Stand’, an exploration of colonial histories as represented through objects from the collections of the Carnegie Museums in Pittsburgh, in 2018. Kouoh also served on the curatorial teams for Documenta 12 and 13 (2007 and 2012), and has written and published critical works, including the upcoming Breathing Out of School: The RAW Académie, and Condition Report on Art History in Africa, co-edited with Ugochukwu-Smooth C. Nzewi et al.

Maria Mercedes González was appointed the general director of the Medellín Museum of Modern Art (MAMM) in 2012. Established in 1978, the museum is a non-profit private institution, exhibiting works of contemporary and modern artists of the 20th century, mostly of Colombian origin. The institution tackles issues that are culturally, socially, politically and aesthetically relevant, drawing from the landscape of the contemporary arts while maintaining high-quality production and a tight connection to the local context. Since assuming her post, González has led a building expansion project and implemented an extensive programming reorientation. Prior to MAMM, she was an advisor to the Colombian minister of foreign affairs, and served as the cultural attaché at the Colombian Embassy in Buenos Aires, Argentina. She received her BA in political science from Javeriana University, Bogotá, and an MA in media studies from The New School, New York.

Frances Morris has been the director of Tate Modern since 2016. A curator, writer and broadcaster, he joined Tate Modern in 1987, becoming the head of displays there in 2000 and the director of collections, international art in 2006. Alongside many exhibition projects and publications, including acclaimed retrospectives of Louise Bourgeois, Yayoi Kusama and Agnes Martin, Morris has led the transformation of Tate Modern’s international collection, strategically broadening and diversifying its international reach and representation, developing the collecting of live art and performance, and pioneering new forms of museum display. Frances has played a leading role in Tate Modern’s strategic response to environmental issues since its declaration of a climate and ecological emergency in July 2019.

Nora Sternfeld is an art mediator and curator. She is a professor for art education at HFBK Hamburg. From 2018 to 2020 she was the documenta professor at the Kunsthochschule Kassel. From 2012 to 2018 she was the professor of curating and mediating art at Aalto University in Helsinki. She is also a co-director of the /ecm - an MA course on exhibition theory and practice at the University of Applied Arts Vienna, in the core team of schnittpunkt. ausstellungstheorie & praxis; a co-founder and partner of trafo.K, Office for Education, Art and Critical Knowledge Production (Vienna); and, since 2011, part of freethought, Platform for Research, Education and Production (London). Sternfeld was also one of the artistic directors of the Bergen Assembly 2016, and is 2020 BAK Fellow, basis voor actuele kunst (Utrecht). She publishes on contemporary art, educational theory, exhibitions, historical politics and anti-racism.

Ann Temkin is the Marie-Josée and Henry Kravis chief curator of painting and sculpture at The Museum of Modern Art (MoMA). Recent exhibitions she has curated or co-curated at MoMA include ‘Judd’ (2020), ‘Picasso Sculpture’ (2015), ‘Robert Gober: The Heart Is Not a
Metaphor’ (2014) and ‘Jasper Johns: Regrets’ (2014). Temkin has focused on transforming the museum’s collection galleries into a dynamic, rotating presentation, and on strengthening and widening the painting and sculpture holdings.

Rein Wolfs has been the director of the Stedelijk Museum Amsterdam since December 2019. He studied modern and contemporary art at the University of Amsterdam, and worked as a critic and curator between 1986 and 1991. His prior engagements included the directorship of the Bundeskunsthalle (Art and Exhibition Hall of the Federal Republic of Germany) in Bonn (2013–19), artistic director of the Kunsthalle Fridericianum in Kassel (2008–12), exhibition director of the Museum Boijmans Van Beuningen in Rotterdam (2001–7) and founding director of the Migros Museum für Gegenwartskunst in Zurich (1996–2001). In 2003 he curated the Dutch pavilion at the Venice Biennale.

Raqs Media Collective Monica Narula, Shuddhabrata Sengupta and Jeebesh Bagchi formed Raqs Media Collective in 1992 and to be anchored in New Delhi. They follow its self-declared imperative of ‘kinetic contemplation’ to produce a trajectory that is restless in its forms and exacting in its procedures. Raqs articulates an intimately lived relationship with time in all its tenses through anticipation, conjecture, entanglement and excavation. Conjuring figures of cognitive and sensory acuteness, Raqs’ work reconfigures perceptional fields, and demands that everyone looks anew at what they take for granted. Raqs has exhibited widely, including at Documenta, and at the Venice, Istanbul, Taipei, Liverpool, Shanghai, Sydney and São Paulo Biennales. Recent solo exhibitions (and projects) include ‘Pamphilos’ (Fast Forward Festival 6, Athens, 2019), ‘Still More World’ (Arab Museum of Modern Art, Doha, 2019), ‘Twilight Language’ (Manchester Art Gallery, 2017–18), ‘Everything Else is Ordinary’ (K21, Dusseldorf, 2018), ‘If It’s Possible, It’s Possible’ (MUAC, Mexico City, 2015) and ‘Untimely Calendar’ (National Gallery of Modern Art, Delhi, 2014–15). Exhibitions curated by Raqs include ‘In The Open or in Stealth’ (MACBA, Barcelona, 2018–19); ‘Why Not Ask Again’ (Shanghai Biennale, 2016–17); ‘INSERT2014’ (New Delhi, 2014) and ‘The Rest of Now & Scenarios’ (Manifesta 7, Bolzano, 2008). They are the artistic directors of the forthcoming Yokohama