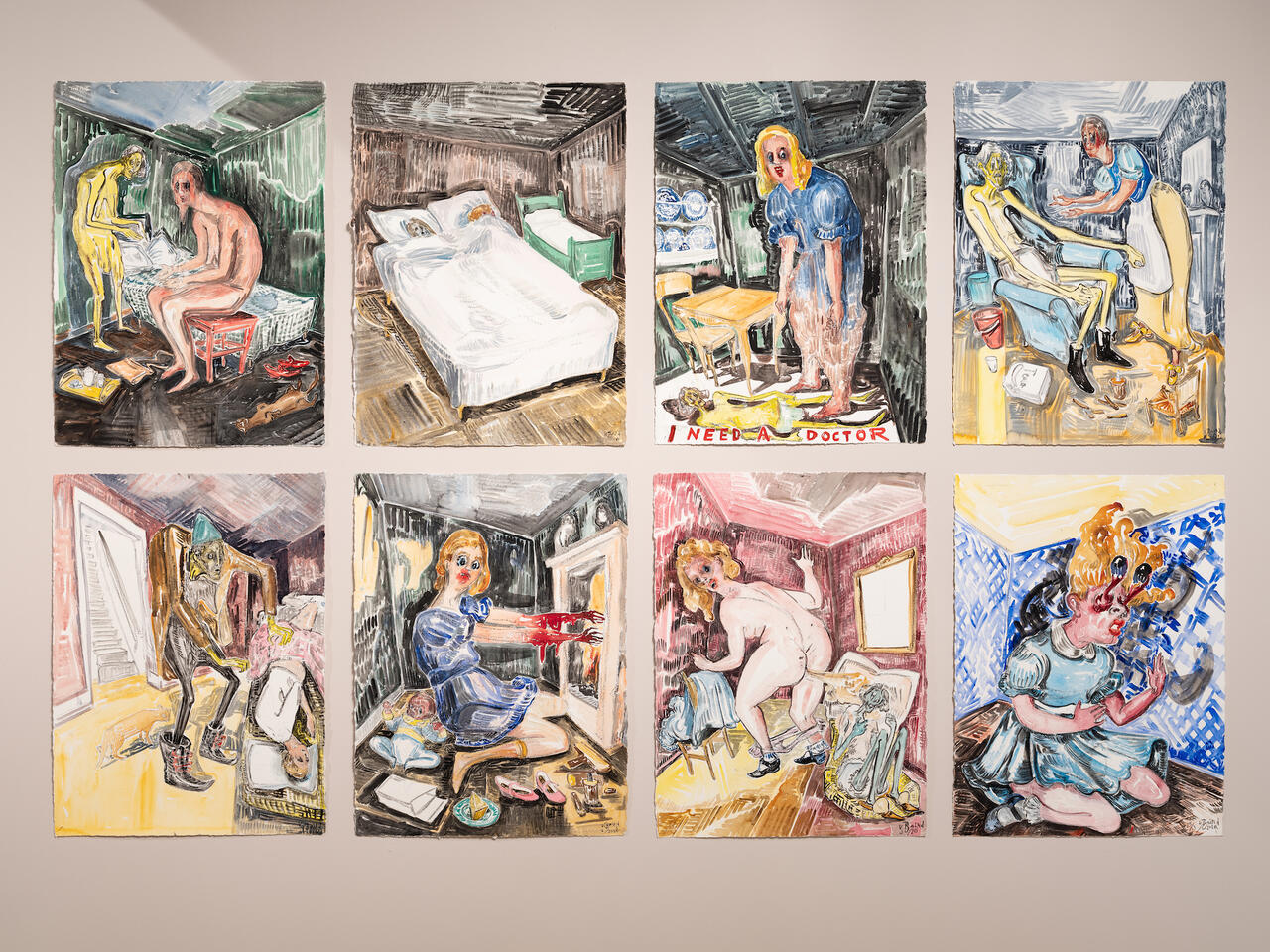 Title: I Can Get Right Down to the End of the Town and Be Back in Time for Tea

OSL contemporary is proud to present an exhibition featuring new works by Vanessa Baird, an artist known as one of the most distinct voices in Norwegian contemporary art. Baird’s work is storytelling of a kind that is both potently provocative and emphatically individual. Her work draws on a wide range of references from her own lived experiences, as well as from Scandinavian folklore and literature. Whether surreal or narrative, her intense and detailed drawings are often perceived as controversial, regularly commenting on contemporary political and social affairs and observations from personal domestic realities. The show comprises two series of charged creations, made in pastel and watercolour. In the exhibition a wall will be covered with works in a smaller format, in addition to this, a series of larger individual works will be on view.

Baird’s work range from large-scale murals and wallpapers to intimate portraits. Her work became the centre of a major public debate on art and censorship following the 2011 attack on the Norwegian Government Head Quarters and Utøya when a work commissioned by the Government (prior to the attack) was removed due to the fear of reactions. This sparked a public discussion on art that is still prevalent. The work was later re-installed and is on view at public sites such as the Arts Council Norway. As a result, Baird went on to win the cultural prize Telenor Borderless Communications, and she is also the latest official artist of the Nobel Peace Prize certificate.

In 2015 Baird won the prestigious Lorck Schive Kunstpris, one of the premier art awards for artists living and working in Norway. She also illustrated the author Karl Ove Knausgård’s novel Om høsten (Autumn, 2015). Her exhibition «You are something else» at Kunstnernes Hus, Oslo (2017) was hailed by critics and curators alike as the most important in newer Norwegian art history. Baird has also been cited as one of the highlights of the Kochi Muziris Biennale 2019, Kerala India, curated by Anita Dube.

Her work is represented in the British Museum’s Prints and Drawing Collection as well as key Norwegian collections, such as The National Museum of Norway, Stavanger Kunstmuseum, Astrup Fearnley Museet, Sørlandets Kunstmuseum and KODE. Baird has done several permanent commissions in public spaces in Norway.