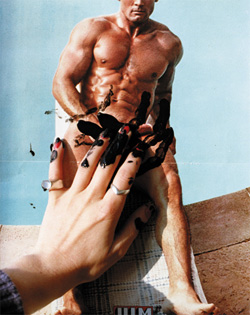 ‘Alexis Hunter: Radical Feminism in the 1970s’ presented a body of work that has not been seen in public for nearly three decades. Hunter, who is originally from New Zealand and has lived in London since the early 1970s, is known today as a painter; however, this exhibition presented her early work in Conceptual photography and situated her practice as an important contribution to Britain’s feminist movement within the visual arts.

Hunter’s work from this period, like that of other feminist artists in Britain at the time, focused on female subjectivity and the now-hackneyed notion of ‘the personal is political’. Where Mary Kelly used her son and the detritus of domestic life, Susan Hiller pictured her pregnant stomach and Tina Keane incorporated her daughter into her work, Hunter often employed hands in her images to suggest the human form, but rather than use those of a model, which was ideologically problematic for feminists, Hunter used her own; and indeed these featured in almost every work on show in Norwich.

‘Approach to Fear II: Change – Decisive Action’ (1977) is a series of images in which feminine hands are made more masculine through small actions: the removal of red nail varnish, then the cutting of the fingernails with a razor blade. ‘Sexual Warfare’ (1975) is a piece that is presented as a grid of photographs, akin to much Conceptual practice of the time. Here Hunter’s hands demonstrate various ways of killing a male partner and are juxtaposed with text. For example, CASTRATE, DEDICATED TO DELILAH shows a manicured hand clutching an ominous pair of scissors. A mixture of horror and humour permeates the piece: BANKRUPT shows the woman fondling a pearl bracelet, and COMPETE features the hand holding the book How to Make it in a Man’s World.

Throughout Hunter’s work the hands lend a human element to the photographs in the form of a generic ‘everywoman’. For example, The Marxist Housewife (Still Does the Housework) (1978) comprises a series of images that feature a woman’s manicured hand cleaning a poster of the revolutionary thinker. This piece examines the fact that Marx didn’t recognize domestic labour in his writing and illustrates the artist’s engagement with a branch of Feminism that was preoccupied with class issues.

Hunter also turned the camera on herself in a series of portraits. ‘Identity Crisis’ comprises six images of the artist, each taken by a different person in her life over the course of two weeks in 1974. Hunter asked them to take a photograph of how they saw her. In one image she wears a hard hat and looks defiantly out at the viewer. In another she is softly lit, fully made up with a pearl necklace and open shirt, the picture of alluring femininity. In yet another her hair is shaggy and she looks down, suggesting a vulnerability and lack of self-confidence.

Like other women artists in the 1970s, Hunter also turned the camera on men in an attempt to reverse the so-called male gaze. In the ‘Sexual Rapport’ series (1972–6), the first work that the viewer encountered in the Norwich show, Hunter photographed men on the streets of Little Italy in New York and Hoxton in London. From cops on the beat to workers having their lunch, Hunter snapped her subjects and then stamped the photographs with a ‘YES’, ‘NO’ or ‘MAYBE’, depending on whether she perceived a sexual rapport with them. The good-natured and sometimes bemused grins give the impression that Hunter accomplished her task with good humour and affability.

The image on the cover of the exhibition cata-logue and the gallery brochure is from one of the ‘Sexual Rapport’ series. Shot in black and white on a rooftop in New York, it features a man’s torso in contrapposto, naked from the waist up, wearing leather trousers and a biker belt. The twin towers of the World Trade Center loom ominously in the distance, the ultimate phallic symbols. The anonymous man holds a smoking cigarette, which is poised exactly where his penis would be. This is at once an homage to and parody of masculinity. The image sums up Hunter’s work: a combination of intellectual inquiry into desire and subjectivity, but handled with tongue-in-cheek humour and ease.