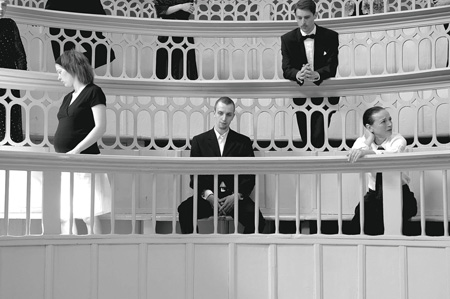 Long before the debates over stem-cell research or climate change, controversy raged over the field of botany. During the Enlightenment, for example, plant textbooks were considered pornographic. Looking at Ana Torfs’ silkscreened prints of mostly hermaphroditic plants, it’s easy to see why. In her photographic series, ‘Family Plot #1’ (2009), we see close-ups of voluptuous pistils and suggestive stamens – the sex organs of plants on which Carl Linneaus, the father of botany, based his naming system. (As his artificial approach to classification was gradually replaced, botany became a decidedly less racy discipline.) As Torfs discovered while researching a certain botanical garden in Cuba, it wasn’t all in Linnaeus’ head: the explorers who gathered the specimens and brought them home weren’t far from today’s ‘sex tourists’.
In a complementary series of collages, ‘Family Plot #2’ (2010), Torfs continues her practice of dissecting and mingling cultural histories – in this case, the roles of science, state and private appetites that are behind the naming of particular plants. In these works, Torfs traces Latin plant names back to their sources. Her framed collages, with their tidy blocks of pedantic texts and images reproduced from encyclopaedias and almanacs, beg to be taken seriously. Here we learn that the magenta blossoms known as Bougainvillea glabra Choisy were named for French admiral and explorer Louis-Antoine de Bougainville – known for his attempt to defend France’s claim to Canada against the British, settling the Falkland Islands and declaring that the Tahitians knew ‘no other god than love’. Another collage focuses on the Quassia plant genus, which is named after African slave Quassie van Timatibo. In the collage, Torfs includes a miniature image of him based on an original portrait. Over an inflated chest, Van Timatibo wears a gold-laced suit accessorized with a feathered hat and cane; these accoutrements were his rewards for turning traitor to his fellow runaway Maroon slaves by becoming a professional slave hunter himself. Clearly, even plants are susceptible to politics.
Torfs’ other new work is Displacement (2009), a 55-minute slide installation and loose remake of Roberto Rossellini’s 1954 film essay Viaggio in Italia (Journey to Italy), which traces the dissolution of a marriage. Again, Torfs continues her practice of mining existing texts – court records, old almanacs, diaries – to form narratives that she presents in installations in which sound, image and text are literally and physically divorced. Here, two screens were mounted at opposite ends of the room, text running on one of them, while the characters’ voices were piped in through wireless headphones. Unsynchronized and disorienting, it left me wishing for the rear-view or additional serial processing capabilities.
In place of Rossellini’s Naples, Torfs sets her version on a deserted island, described by the (possibly unreliable) narrator in vaguely European-accented English as an isle with ‘Northern European scenery, Italian coastline and Arizona sands, all within one hour’s reach.’ Slide images show a defunct military defence zone covered by bunkers and barbed wire. The alienation of the main protagonists, a married couple, is palpable, not only because of their exchange, at turns accusing then placating, but also because everything here is literally and physically adrift: the elliptical narrative of Torfs’ tale, the slide images of the empty island on one end of the room, juxtaposed with the huge, inscrutable portraits of the couple at the other end. Reality becomes at once heightened and enlarged, but also dubious and disturbing.
Also included in the show were Torfs’ earlier and perhaps more successful installations combining slide, video and sound, including Du mentir-faux (2000), based on Joan of Arc’s inquisition trial records, and Anatomy (2006), based on the military tribunal investigating the deaths of Marxist activists Rosa Luxemburg and Karl Liebknecht. The superimposed places, people and voices, shown and heard in close-up or off-screen, create a spatial, Brechtian Verfremdung that rarely cracks (though at one point, the narrator in Anatomy begins sobbing), and is simultaneously a source of pleasure and frustration, for reasons similar to Displacement.
Whether dissecting political assassinations, martyrs burned at the stake, or colonial pillage, Torfs’ works remain dreamy and polite, while clearly revealing ambiguity and nuance. It might be difficult work, but Torfs knows that insisting loudly on truth doesn’t make it easier to reconcile what you see with what you hear and what you think you know.

Helen Chang is a writer based in Vienna.