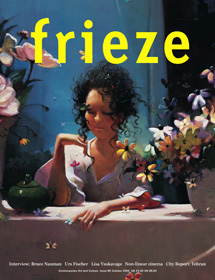 In 1973 Playboy dubbed Ant Farm a ‘cultural commando group’. They weren’t far off. Kidnapping Buckminster Fuller, crashing a Cadillac through a wall of burning television sets and restaging JFK’s assassination in Dallas were some of the more outrageous and provocative actions undertaken during the group’s ten-year collaboration. From 1968 to 1978 Chip Lord, Doug Michels and Curtis Schreier functioned as Ant Farm, an art collective with a Utopian agenda and a penchant for radical architecture. Trained as architects, the group was often joined by other artists and collaborators, including Doug Hall and Hudson Marquez, to actualize projects and media events.

Originating at the Berkeley Art Museum and co-curated by Constance Lewellen and Steve Seid, this travelling retrospective is arranged in timeline fashion, and consists mainly of such ephemera as event posters, mail art, architectural drawings, grainy video works and performance documentation. But this only hints at the group’s total production, much of which included portable, site-specific, inflatable or otherwise short-lived works, most of whose remains were destroyed in a fire in the group’s studio space in 1978.

More folk art than earthwork, Ant Farm’s most iconic and enduring work is Cadillac Ranch (1974), a critique of car culture that also serves as an unabashed homage to the evolution and extinction of the tail fin on classic 1950s-era Cadillacs. Often referred to as Texas’ Stonehenge, the piece consists of a row of ten wide-bodied gas-guzzlers buried headfirst in the earth off Route 66 in Amarillo, Texas. A term that has now filtered into the broader pop culture, Cadillac Ranch became the inspiration for the 1980 Bruce Springsteen song and dozens of subsequent car-themed bars and eateries across the country, an unintended but not wholly unappreciated trickle-down effect. Rather than eschew the mainstream, however, Ant Farm had strong populist tendencies, specifically choosing a visible site near a busy highway rather than a remote location in the manner of Robert Smithson, whose nearby Amarillo Ramp (1973) was commissioned by the same patron.

The group’s literally explosive Media Burn (1975) has become the stuff of art-happening legend, their most important performative critique of the culture of media and spectacle. Inviting only members of the press to attend the event at San Francisco’s Cow Palace on Independence Day, 1975, Michels and Schreier drove their space age Phantom Dream Car (a futuristically customized 1959 Cadillac El Dorado) through a barricade of blazing TV sets. Fully aware that they were fabricating a ‘media event’ that itself targeted the complacency of the mass media (the short drive was eagerly covered by curious local television stations), the group pulled out all the stops, ceremoniously sending off the two volunteering ‘artist-dummies’ with a high-minded political speech given by a JFK look-alike. Like countercultural astronauts, the drivers conducted themselves as if on a heroic mission, patriotically using television to witness its own sensational destruction.

It is refreshing to see such overtly political work succeed, especially in the context of the current divisive geopolitical climate. Their other famed bit of political theatre, The Eternal Frame (1975), which re-enacted the Kennedy assassination as documented in the famous Zapruder home movie, is both deadly serious and completely over the top, with Michels dressed in drag as Jackie Kennedy. The work examines how media-driven images have come to shape our collective understanding of major events, the disconnection between actual experience and experience formed through repeated television viewings. Before 11 September 2001, perhaps only the baby boomer generation could understand the high stakes involved in creating such a parody. Post-9/11 the piece resonates with prescient wisdom.

Surveying the surly Conceptual comedy that was Ant Farm, it is hard to find any contemporary equivalent. Certainly the Danish groups N55 and Superflex explore similar strains of Utopianism, but it is difficult to match the combined effect of Ant Farm’s wicked political wit, idealism and satirical exuberance. Without the upheavals and cultural shifts of the 1960s, agitprop groups such as Ant Farm – or their contemporaries the British collective Archigram and the Italian Superstudio – would have been inconceivable. But this show couldn’t be timelier. In our own tumultuous and politically polarized era, a renewed awareness of the example set by Ant Farm appears even more invaluable and overdue.