The best art and literature books of 2005 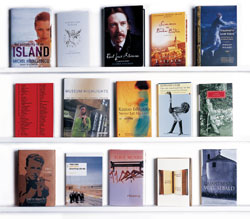 At a time when the contemporary art world seems to be in a state of manic overdrive, I’ve been browsing through a couple of anthologies of artists’ writings, surveys of work done over the last 20-plus years: Thomas Lawson: Mining for Gold, Selected Writings 1979–1996 and Museum Highlights: the Writings of Andrea Fraser (all books 2005). Both books grapple with the construction and function of the artist, artistic practices and cultural institutions within the broader social field and provide a much-needed space for reflection on where this contemporary art game is coming from and what the possibilities are for any socially and politically engaged artistic practice.

Lawson’s writings focus on the New York art scene of the 1980s, particularly the debate that whirled around ‘neo-Expressionist’ figurative painting, seen by many in the critical community as a regression to the fetishized artist-hero and art object/commodity that Conceptual and related practices had successfully challenged and eroded over the previous two decades. In the meantime, however, those same critical discourses have themselves ascended into pedagogical respectability and informed successive generations of young artists making their way through the ranks of contemporary art-making educational programmes. (It’s true that this has spawned various backlashes as well.)

Fraser’s book is a mix of critical essays and performance texts, with a more rigorous focus on the practice and possibilities of specific institutional critiques. There’s something depressing about her expansive critique: the inter-relatedness of the prevailing forces leaves little room for opposition, let alone intervention. I appreciate how she plays with multiple spaces, voices and forms of address, but in the end what I fear remains is a critique inextricably bound up with and obsessed by the institutions themselves. Worth a closer read is Chapter Six, in which Fraser considers the development of Conceptual art practices alongside the concurrent activist strategies of the Art Workers Coalition in late 1960s.

My favourite artists’ book of 2005 (printed in 2004, but we got it in the USA at Printed Matter Bookstore in 2005) is All The World’s Fighter Planes,
by Fiona Banner. The book is composed entirely of newspaper and magazine clippings and cut-outs of 154 military aircraft, whose names are also spelt out on the front cover. This blunt and obvious reminder of the militarized society and culture (and nation-state!) that we live in is also a comment on the banality of that experience and on the amazing fact that we go through our daily lives relatively oblivious to it.

Finally as an antidote and/or complement to those above, representing an activist strategy rather than one of critique, another favourite publication of the year is the three-DVD set from Deep Dish TV Shocking and Awful, an anthology of cable and satellite television broadcasts of the US invasion and occupation of Iraq. The 12 half-hour broadcasts intermix progressive analyses, a range of Iraqi points of view on the experience of living under siege and occupation, and footage of dissent and protest. How many people are aware that the largest public protests in the history of the world took place two years ago all across the world? Late/high capitalism may be attempting to collapse the space of public protest within the spectacular space of consumer capitalism, but here is evidence, both in what this DVD portrays and what it is: real voices, real spaces, real resistance. This is a tangible, instructive example of a socially and politically engaged cultural practice.

Max Schumann is an artist and associate director of Printed Matter, Inc., an independent non-profit artists’ bookstore in New York.

One of the many books I enjoyed reading last year was Alberto Manguel’s A Reading Diary (2004), an amalgam of diary-like jottings and journal entries inspired by the various books the author read during a 12-month period. Manguel set himself the task of reading (actually, re-reading) a different book each month; as he proceeds, A Reading Diary rests on several incidental themes – for instance, how books change with every reading, and how old books reflect the here and now. In one memorable passage Manguel is reading from Chateaubriand’s 19th-century Mémoires d’outre-tombe (Memoirs from Beyond the Grave) on the night of 9/11, and is startled to stumble across a passage denouncing terrorism. All great books are like that: their sentences ricochet right down the centuries.

The year 2005 was a good one for fiction, with a rich harvest from old and new voices. One discernible trend was the re-emergence of a ‘literary’, Ballardian take on science fiction, from Kazuo Ishiguro’s cleverly dour Never Let Me Go to Michel Houellebecq’s The Possibility of an Island. There were also many fine short story collections – Dave Eggers’ How We Are Hungry and Alice Munro’s Runaway both being very accomplished in their opposing styles. Inevitably and sadly, 2005 also saw the death of several wonderful writers, including Saul Bellow, who died at 89, in April.

Of course, when writers die, their presence remains strong in other ways. Leonid Tsypkin, who died in 1982, a week after the first instalment of his novel Summer in Baden-Baden appeared in print, might have been bemused to see his book being rapturously ‘rediscovered’ and reprinted last year, largely thanks to the endorsement of the late Susan Sontag, who found a neglected edition in a bookshop on the Charing Cross Road. A more well-known recent case of posthumous publication is that of W.G. Sebald, whose unfinished Corsican project Campo Santo – apparently the last in a string of literary leftovers published since his death in 2001 – appeared early in the year. Sebald’s insistence on calling his books ‘prose fiction’ was more than a quirk: he was one of very few writers to pioneer an original literary form. Campo Santo isn’t the best introduction to his work, it must be said, but it does have some brilliant essays that help us trace his evolution.

Philip Hoare’s superb England’s Lost Eden: In Search of a Victorian Utopia (2005) owes much to Sebald: its illustrations, psycho-geographical wanderings and fusion of research with eerily well-wrought, weightless prose all echo him. Beginning with an investigation into Mary Ann Girling and the Shakers, the book soon spirals out into other strange aspects of Victorian England. I especially relished the portrayal of John Ruskin’s ‘adventures in the other world’ of séances and spiritualists, and the account of the art critic’s bizarre relationship with Rose La Touche. Meanwhile, the republication last year of Ruskin’s autobiography, Praeterita (Latin for ‘things past’), went largely unremarked: it’s an admittedly erratic text, distressingly touched by ‘brain fever’, as all Ruskin’s late books were. But many passages still unfold with almost visionary brightness, and the book was a major influence on Marcel Proust, whose massive A la recherche du temps perdu (In Search of Lost Time, 1913–27) even has several characters who unmistakably recall Ruskin’s family.

Another Victorian who reappeared in a new guise in 2005 was Edward Lear, with ‘Over the Land and Over the Sea’: Selected Travel Journals and Nonsense Writing, edited by Peter Swaab. Some of the writing gathered here from Lear’s six travel books (intimately related, Swaab argues, to the world of the nonsense verse in their outlandish absurdity) hasn’t been reprinted for many years. It makes a good companion piece to new biographies of two other literary travellers: Claire Harman’s Robert Louis Stevenson: A Biography and Virginia Spencer Carr’s Paul Bowles: A Life. The latter book is more of an ‘authorized’ portrait than Christopher Sawyer-Lauçanno’s 1989 biography – though Bowles was such a reticent man that authorization carries its own pitfalls.

In 2006 the veteran Polish journalist Ryszard Kapuscinski’s new book about the travels of Herodotus should be translated into English. It has been several years now since Kapuscinski’s The Shadow of the Sun (2002), which was about his experiences in Africa. This latest project sounds like a slight departure from his self-defined genre of ‘literary reportage’ but promises to be just as revelatory. As for poetry, I spent much of 2005 reading the Complete Poems of Elizabeth Bishop (1984), who died in 1979 and whose work seems to be growing in stature as time passes. She published relatively little during her lifetime, sometimes spending decades reworking individual poems until they were finished to her satisfaction. There’s an obvious irony in now wanting to read all the off-cuts and poems-in-progress that she eventually rejected – but even so, I’m still keenly awaiting the forthcoming volume of her uncollected poems, drafts and fragments, Edgar Allan Poe & the Juke-Box, which is being published early in 2006.

Jerome Boyd-Maunsell is a writer living in London.