The highs and lows of mass housing in the UK 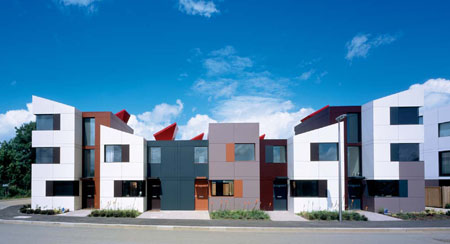 ‘British architecture is haunted by the spectre of Ronan Point.’ Such is the claim of the long-running British architecture blog Kosmograd, so wedded to the prospect of instant cities that most of its recent posts have been sponsored by Portakabin. What had spurred the blogger in question into this provocation was the association between the idea of factory-made, easily-assembled, modular buildings – something with a long and proven history – and the collapse of one tower in London more than 40 years ago.

Ronan Point, built in 1968, was part of the Freemasons Estate in Poplar in East London, a 22-storey ‘system-built’ tower clipped together on site from prefabricated components. The system was invented in Denmark, for buildings of up to eight storeys. A gas explosion in May 1968 (oh yes!) led to the collapse of part of the tower, killing four people. Since then, in the British imagination Ronan Point has become analogous to Pruitt-Igoe, the notorious 1954 estate in St. Louis, USA, whose demolition in 1972 was proclaimed by Charles Jencks in The Language of Postmodern Architecture (1977) to mark the end of Modernism – although its death was evidently much exaggerated. In reality it was more the local crisis of a particular idea: that housing could be mass-produced with the efficiency and speed of the motor industry and could become an unabashed industrial product. Before Ronan Point, it was possible to imagine that design, technology and mass access were together creating a new Britain. Since then, architecture, technology and mass housing have rarely been aligned, in the UK at least. Houses are largely built from brick, from the bottom up, as they have been for thousands of years. When finished they’re filled with laptops and plasma screens, with driveways outside. Once, this seemed absurd; now it’s invariably accepted.

Though often slotted into a narrative about the failure of modern architecture, Ronan Point wasn’t actually designed by an architect but by a firm of volume housebuilders (the speculative developer-builders who dominate housing supply in the UK) Taylor Woodrow, who constructed hundreds of similar building in the late ’60s. The City Architects’ Departments who designed the more thoughtful Modernist estates lost their jobs in the ’80s, casualties of Conservative attacks on local government, while the technocratic masterminds of faulty blocks continue to build thousands of (now low-rise) housing units, to enormously lucrative effect. Taylor Woodrow are now Taylor Wimpey, one of the largest housebuilders in the country. Visit their website, and you’ll see classical details, red brick and pitched roofs. The mass housing they and their ilk build hasn’t been Modernist for decades – and it hasn’t become any more elegant in the transition.

Similarly, most of the architecture built during the New Labour boom was fairly primitive – poured-concrete frames clad in terracotta and wood for flats and astoundingly traditional brick construction for houses. But there was one major exception – a place called Oxley Woods, in the late 1960s town of Milton Keynes, where Taylor Wimpey commissioned Richard Rogers’ firm Rogers Stirk Harbour + Partners to design a small development of prefabricated ‘eco-homes’ in 2007.

The rationale behind prefab was always an unstable mixture of banal utilitarianism and Romantic Utopianism. It was experimented with in the early 20th century by everyone from Thomas Edison to Bauhaus director Walter Gropius, who hoped that his 1926 prefab Törten-Siedlung in Dessau, eastern Germany, would make him ‘the Ford of Housing’. The analogy is key. Not only a new mass access to a once improbably expensive object, but also an architecture where you can choose a colour as long as it’s black, and where a perfect, endlessly repeatable module is universally applicable. It treats housing – a subject about which the English, in particular, with their ludicrous investments-cum-cottages, are unable to be rational – as a simple industrial item. Yet Ford stopped producing classless, interchangeable products many decades ago, and cars are as over-determined by entirely un-technical notions of class, gender and distinction as anything on the property ladder. Similarly, in much of the world – China, most obviously – prefab is how most things are actually built. It’s just the way things are, and there is no contradiction in prefabricating appliqué classical details to stick on a high-rise.

In the UK, though, prefab is still controversial. Those who do use system-building are the builders and developers of hotels and halls of residence. Prominent among them is Unite, a company notable for the banality of their design and their overbearing bulk – like inescapable 21st-century Ronan Points looming over the centres of Leeds and Liverpool. But more instructively, Taylor Wimpey recently cancelled their experiment in Milton Keynes, proposing to finish the scheme with traditional brick houses. Rogers’ eco-homes were elegant precisely because they were so technologically straightforward. Their wooden frames were clad in Trespa (an industrially-produced material more often treated to resemble wood); they cost a tiny amount to construct, and would use very little energy both to build and to live in. But the problem was twofold. First, prefab was always a solution for an industrial economy – the original ones that replaced bombed-out areas after the London Blitz from 1944 onwards were produced in the same factories that once made munitions. In a country where manufacturing is a residue, a fragment, of what it was in the 1940s, it would appear to be more cost-effective to build out of mud than industrial components. Second, Oxley Woods was marketed to a very particular class. Angular, bright, clearly machine-made eco-homes are what Taylor Wimpey would no doubt call a ‘niche market’, catering to design aficionados, environmentalists and people who like architecture – but there aren’t that many of them. The rationale seems to be that in a recession it’s best not to fuck with the formula.

Ironically enough, in January this year – the same month that Rogers’ project at Oxley Woods was cancelled – three other stories of prefabrication made the architecture news, all of them suggesting that industrialized building does indeed still haunt British cities. First, the 1946 Excalibur Estate in south London, largest of the original prefabricated estates left in the UK – the last remnant of the instant, factory-made solutions to Blitz-induced homelessness – was slated for demolition. Given its obvious historical significance, demolition appears designed to erase the insult that this kind of experiment inflicted on the notion that a house should, if at all possible, adhere to both the aesthetics and the technologies that prevailed before the industrial revolution. Housing, for anything other than the easily exploited student population, must at all costs avoid ‘looking’ prefabricated (i.e. modern) more than anything else because the chtonic irrationality of the property market is one of the few things propping up the British economy. It also relies upon a sort of labour theory of architectural value, where anything thrown up in a couple of days by crane is inherently suspicious, and clearly not the result of good honest labour, and hence not ‘homely’. Yet prefabrication of other buildings endures. Supermarkets, retail parks, distribution sheds – and soon, schools.

On coming to power in 2010, the Conservative Education Secretary Michael Gove immediately launched into a series of bizarre diatribes against architects, who he improbably blamed for the spiralling costs of Labour’s Private Finance Initiative-funded schools programme. Designs are starting to trickle in for the replacements – prefabricated sheds, to the recommendations of executives from Tesco and Dixons, who Gove appointed to advise the Department for Education. Tesco have long been pioneers in cheap, quick prefabrication, and have for the last few years often expressed a longing to enter into housebuilding and planning, so their expertise in the mean and low-budget will be key. This, and one final example, are a reminder that technology and class remain deeply intertwined. Boxpark is a planned ‘pop-up mall’ aiming at small, niche retailers, assembled out of shipping containers, planned next to Shoreditch High Street station in London. Prefab chic for hipsters will endure, but in the coalition government’s vision of the future, houses will be based on 18th-century cottages and schools will follow the design principles of supermarkets.