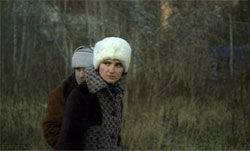 In Clemens von Wedemeyer’s Silberhöhe (Silver Heights, 2003), part of his first major solo show, the starting-point is a matter of chance. Depending on when one enters the room, the loop begins with images of an apartment, a still life of a basket of fruit and a flickering television screen, or else outside, in gloomy suburban streets, with a few men in hard hats and working gear. A house is destroyed, the heavy machinery eats its way through the rubble and the camera moves closer and closer until the demolition process dominates the image. In Otjesd (Wegang) (Otjesd/Leaving, 2005), by contrast, the closed loop does give rise to a form of narrative: the camera floats through wasteland on the outskirts of a town, sections of fencing stand among bare bushes, security barriers block the path; there are men in padded jackets, one selling air tickets, another insurance – the cast of characters usually found outside embassies and consulates. The camera mostly follows a young woman who, in her pink jacket and pale fur cap, looks both Russian and princess-like; and the tracking shot becomes a seamless narrative that keeps the protagonist captive like Alice after she falls down the rabbit hole.

Unlike these two loops, Occupation (2002) has a properly staged opening. As a 35mm film, it is shown in the projection room at the Kunstverein: fade-in, a crunching noise and the film begins, blinding the viewer with dazzlingly bright light from a spotlight pointing straight at the running camera. One is instantly thrown into the action – a point of view that von Wedemeyer obtains by moving the camera around and between the backs of a group of extras. And just like them, the viewer waits in vain for something to happen: for orders, indications, explanations.

Silberhöhe focuses on the shrinking of cities and the disappearance of East Germany’s prefabricated architectural Utopias. Out of the formalities of international cross-border traffic Otjesd constructs a quiet picture with a coldly subdued Russian exoticism. And even when von Wedemeyer chooses a more enigmatic approach, the unexplained remains precisely delineated: the tautology of the night-time film set in Occupation – the extras summoned to be filmed in this state of having been summoned – remains brightly lit in all its strangeness.

An area was left empty between the two black boxes in the elongated glass space of the ground floor where the two loops were shown, a light, transparent space offering a glance behind the scenes: three monitors, with the documentary Die Siedlung (The Settlement, 2004) and two videos with the grandiose titles The Making of Occupation (2002) and The Making of Otjesd (2005). The soundtrack of the second film in particular lends the production added weight and a very specific historical background: after the intertitle ‘Moskau 2004’ a certain Victor Choulman tells of his visit to the German embassy and how it was that for the first time the mention of his Jewish origins had been an advantage, as Jews are fast-tracked there. Even if von Wedemeyer may seem to have been trying to demystify his work, this supplementary programme mainly enhances the main films – just like the extra features used to pad out DVDs.

The flickering screen in Silberhöhe shows sequences from Michelangelo Antonioni’s L’Eclisse (The Eclipse, 1962), while von Wedemeyer’s film idiom borrows motifs from Alfred Hitchcock and betrays his familiarity with Andrei Tarkovsky and Sergei Eisenstein. The artist’s statements on the matter are correspondingly assiduous: ‘Art and cinema are different languages that are related to one another. I am interested in both languages. Together, the two of them facilitate a praxis that opens up new spaces for new studies.’ These ‘new spaces’ he speaks of have long since been explored by others (Sharon Lockhart, de Rijke/de Rooij and Corinna Schnitt, to name but a few). With the confidence of his position, of his references and quotations – both filmic and theoretical – von Wedemeyer undermines his own work. He looks down from the macro-perspective of the social sciences or cultural theory on the terrain he intends to illustrate with micro-views. When the dust has settled in Silberhöhe, his images rise from the rubble of the East German architecture with a restrained theatricality. He does not position himself within this scenario, floating above the events like his camera; the collapse serves solely to lends his films drama and relevance: ‘There are centres where population accumulates while other regions produce ghost towns. Should the attractions of these ruined cities not remain accessible to the previous occupants, for instance as a film studio for as-yet-unwritten movies or as an adventure playground?’ Such questions construct a link to theories, but not to places or events.