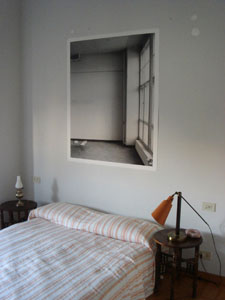 Florian Slotawa’s first solo exhibition in Italy was a curious event: to the casual observer it might have passed completely unnoticed, and even to an audience familiar with his work it remained insistently mysterious. The gallery space – three interconnected white cubes, with entrance and windows at street level – appeared untouched: the exhibition was untitled, the floor space was empty, the bare walls were white. Visitors searching for traces of art were left simply looking at one other. After repeatedly examining the rooms for information, however, they may eventually have noticed a single element standing out from this neutrality: a suspended ceiling consisting of prefabricated ceiling tiles arranged in a square grid of aluminium frames with integrated lighting. While it may initially have seemed part of the gallery’s architecture, the ceiling nonetheless generated a somewhat disconcerting effect. Given the context of the exhibition – a private gallery in the centre of Milan, the international capital of style and design – this ceiling was clearly inappropriate for its surroundings.

During the initial years of his career Slotawa exclusively used his personal belongings as materials for his sculptures. He arranged pencils, clothes, pieces of furniture and even his own car in various settings. Photographic series documented elements of this body of objects according to typology: one image would depict all his trousers, another all his cups, or spoons, or chairs. This phase ended in 2002, when he sold his ‘Gesamtbesitz’ (complete belongings) to a German collector. In anticipation of the fact that he would no longer possess anything connected with his past, Slotawa had already started to accumulate elements from venues hosting his exhibitions as material for future works. In 2001, when invited to put on a show at the Museum Abteiberg in Mönchengladbach, he asked for works from the museum’s collection to be moved to his apartment so that he could live alongside these public assets, and then mounted an exhibition of photographs documenting the co-existence ‘Schätze aus zwei Jahrtausenden’ (Treasures from Two Millennia). In all these works we can see the superimposition of public and private spheres. Slotawa exhibits himself and his belongings, or those of others, and in some cases induces museum staff, and spectators, to participate in these exchanges.

In Milan, Slotawa dealt with similar concepts, albeit adopting a more subtle approach. When the artist was forced to leave his Berlin studio, he decided to dismantle the ceiling components and install them in Milan. Although his use of autobiographical elements was more explicit in earlier works, even an apparently nondescript ceiling can be a familiar object for Slotawa: it is part of his past, something from his home town of Berlin. Yet it is also more than that; the invention of suspended ceiling systems in the 20th century changed the nature of the working environment. These ‘invisible’ systems generated new typologies of communal spaces and signified a different approach to the vocabulary of architecture. Slotawa plays on the contradictory nature of his material: an apparently ‘neutral’ lighting system that carries deeper sociological and personal implications. The work is revealed at one single point: a slender wooden beam – part of the otherwise hidden substructure of the ceiling – was visible where the installation hung down in front of a gallery window, hinting at the temporary nature of the work.
Once visitors had discerned Slotawa’s installation, they were informed that the second part of the project was installed in the gallerist’s apartment. Four large, black and white photographs of the artist’s studio were hung unframed on the walls in the living-room, study and guest bedroom: an act of intrusion. Depicting the cold and empty environment of Slotawa’s abandoned studio, the images contrasted keenly not only with the private atmosphere of the apartment but also with the notion of attributing personal qualities to the entire installation. What have we learnt about the artist from having seen – over several years – not only all his belongings but also photographs of his home and studio? Ultimately, these radical gestures of overexposure reveal less about the artist than they do about ourselves, our expectations and the way we move through social and material spaces. Slotawa does not deny us a story; it’s just that the one he tells is very subtly told.