BY David Shariatmadari in Reviews | 14 APR 07 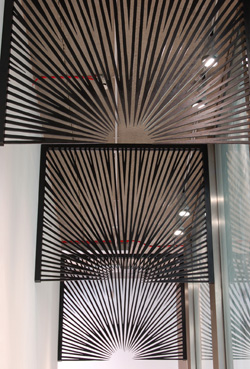 Ice-harvesting was once a booming industry, employing thousands of people from the coastal inlets of southern Norway to the wilds of Big Moose Lake, USA. Now, of course, we have Freon and refrigerators, and the great ice ships that carried their frozen cargo in hulls lined with sawdust no longer cross the Atlantic to cool our G&Ts. But there’s something fascinating about this forgotten industry. Perhaps it’s the fact that such an ephemeral commodity could have formed the basis of a business empire, or that in the absence of modern insulation as much as 50 percent of the ice was lost in transit. In any case, this is fertile ground for the artistic imagination – loaded with symbolism and ripe for interpretation.

It evidently got curators Kim Dhillon and Matt Packer thinking: they used it as the jumping-off point for ‘Ice Trade’, an exhibition of new work by six artists at Chelsea Space. The first work visitors encounter is Bernd Behr’s video Hotel Palindrome (before R. Smithson) (2006). We see shots of an empty lecture theatre and hear two old men talking. They are Professor Goss and Dean Emeritus Bliss, of the College of Architecture and Planning, University of Utah, and they’re trying to remember Robert Smithson’s lecture about a run-down hotel near the Maya ruins of Palenque. It was a long time ago, and their memories are hazy. What does emerge is a cluster of odd details about the lighting, the slide projector, the reaction of some of the students to Smithson’s presentation (‘head-scratching’) and an anecdote about the artist insisting he be brought a tumbler full of whisky, which he sipped from as he talked. It’s as though Behr has returned from a pilgrimage and is offering up images of the place where the lecture was delivered as some kind of holy site. Smithson has been described as a cult figure, but the intensity of Behr’s homage comes across as a little over the top.

A corridor sloping up into the main gallery space was the setting for Florian Roithmayr’s Arrival of the New Planets (2007): three plywood panels fixed to the ceiling at regular intervals. Looking as though they could be part of the fabric of an abstract cathedral, they called to mind crowns of thorns, haloes or comets. Shimmering with illusory movement as their radiating lines criss-cross and interact, the sculptures turned this short walk into a kind of procession.

Roithmayr’s cool formalism contrasted sharply with the main space of the gallery, which is too small for all that was packed in: a heap of linoleum (George Henry Longly’s Mostique, 2007), Lone Haugaard Madsen’s plaster sculptures, Geoffrey Farmer’s posters with their inscrubtable slogans and Thomas Kratz’ work. Suddenly there was too much work clamouring for our attention. Part of the reason was that Kratz’ How I Explain Pictures to a Dead Hare (2007) consists of more than 20 smaller pieces, arranged in a sort of ‘sub-gallery’ in the centre of the room. This is the second instalment of his reworking of Joseph Beuys’ Wie man dem toten Hasen die Bilder erklärt (How to Explain Pictures to a Dead Hare, 1965). The first was a modified re-enactment of Beuys’ performance and took place in Lisbon in 2006. At Chelsea Space, Kratz expanded the concept by contacting a number of artists and asking them to send him examples of their work in the post. The result: a ready-made art collection fit for a hare.

This is all very well, but what has it got to do with ice? The artists have obviously been given free rein to play with a concept that might, in any case, have been interpreted quite loosely, but some clearly weren’t responding to it – Kratz’ work, for instance, is the continuation of a piece that was initiated before he was asked to take part in this show. Any resonances with the ice trade, then, could be purely coincidental. Does this matter? Did we really need any of the artists to sculpt self-portraits in ice or leave blocks of frozen urine to melt on the floor? Of course not. Dhillon and Packer’s concept came across more as an exhibit in itself than an overarching framework. Which is no bad thing. Taken as a piece of art, it might well have been the most interesting work here.