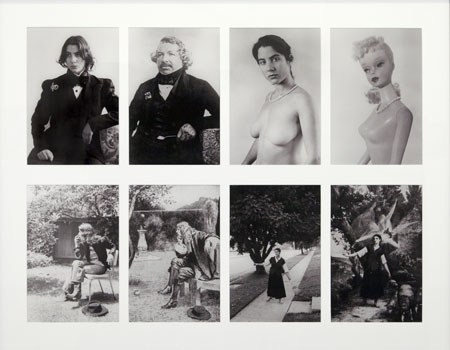 I went to see Ilene Segalove’s exhibition at Andrea Rosen Gallery on the same day I saw 24-year-old Lena Dunham’s debut film Tiny Furniture (2010). Although more than three decades separate Segalove and Dunham in age, the two occupy a lot of the same territory. Seen together they give credence to the claim made by Dean Valentine, who curated the Segalove show: ‘Every kid who points a video camera at himself and tells his story to the world on YouTube owes Ilene and her fellow artists a great debt of gratitude.’
Dunham did indeed make her start on YouTube (with a video that makes reference to feminist body politics and Gordon Matta-Clark’s 1976 Clock Shower). Segalove emerged out of roughly the same period as Dunham’s references and is an exact contemporary to Dunham’s mother, the artist Laurie Simmons, whose performance in many ways anchors Tiny Furniture. The Segalove–Dunham continuum plots the course of a low-key feminist art and theory from the 1970s through to today.
Both are interested in models of feminine identity, and childhood is a clear leitmotif. This childhood is presented in variously bracketed and ironized ways, that uniformly relate to the conundrum of feminine domesticity – the titular ‘tiny furniture’ of Dunham’s film (and Simmons’ practice) or the dolls that appear throughout Segalove’s work. These include the Barbie doll in (Ilene and Barbie) Close But No Cigar #1 (1976), or the evocation of paper dolls in All Of My Pants Except The Ones I Was Wearing – Fronts (1974) and All Of My Pants Except The Ones I Was Wearing – Backs (1974). From this clearly delineated territory, Segalove and Dunham establish a deadpan voice with which to explore internal life, fantasy, and their role in which it means to be female. Segalove in particular is not dissimilar to an artist such as Sophie Calle, who uses feminine insecurity and romantic attachment as her subject material. Both are interested in the compulsion to narrativize, and therefore author, their experience. (Segalove’s succinct narrations in her text-based works are especially reminiscent of Calle.)
Segalove tells the story of apparently everyday experiences, whether it is a break-up or an argument. But she uses psychoanalytic structures to create a narrative frame for these events, and therefore a sense of clear significance, however ironized. In Why I Got Into TV and Other Stories (1983), the artist describes a family dinner interrupted by the funeral of John F. Kennedy. Following this incident, Segalove decides to ‘get into television’ in a classic bid to win her father’s attention.
These Freudian structures come heavily framed by quotation marks, but the anxiety that they refer to is real. Anxiety is the filter through which Segalove’s videos are often narrated. For example, she describes watching the television show Dragnet (1951–9) as a child; as the tense music fills the living room, she watches her parents kiss. Segalove does not stage childhood as a retreat from sexuality: one of the wittiest videos in Why I Got Into TV... relates an intense childhood crush on the television repairman, a neat conflation of schoolgirl romance and a porn movie premise.
But despite the constant intrusion of sexuality into the world of childhood – whether in the pneumatic breasts of Barbie or the story of a painter turned flasher (Five True Stories, 1980) – Segalove distinguishes between the world of adult sexuality and childhood sexuality. And the latter, she seems to suggest, is one that is thoroughly authored and imbued with a sense of agency.